We approach what looks like a visitor centre and ticketing office. 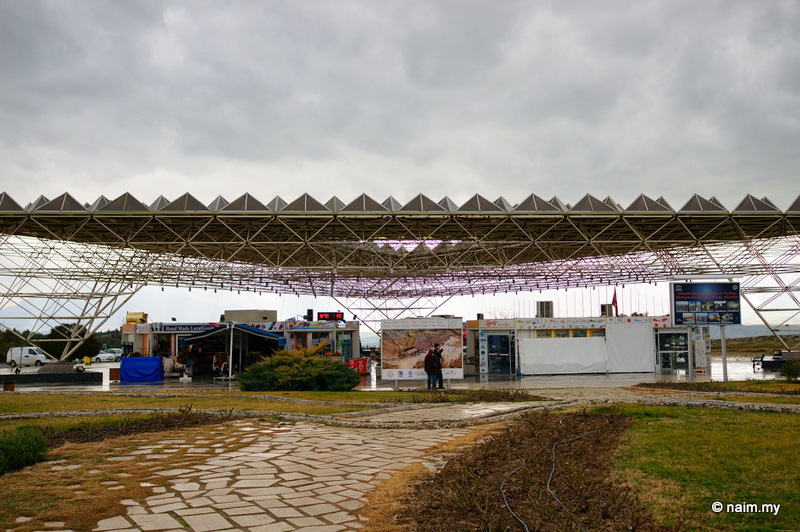 Yes, this is the entrance to the Hierapolis-Pamukkale UNESCO World Heritage Site. A major ancient Greco-Roman city — Hierapolis of Phrygia — built in the 2nd century BC at the site of an important spa, for thousands of years whose mineral-laden water has oozed from the side of the hill and deposited calcite (calcium carbonate), thus forming white terraces — whence Pamukkale, the ‘Cotton Castle’. The Romans were having fun right from the outset! 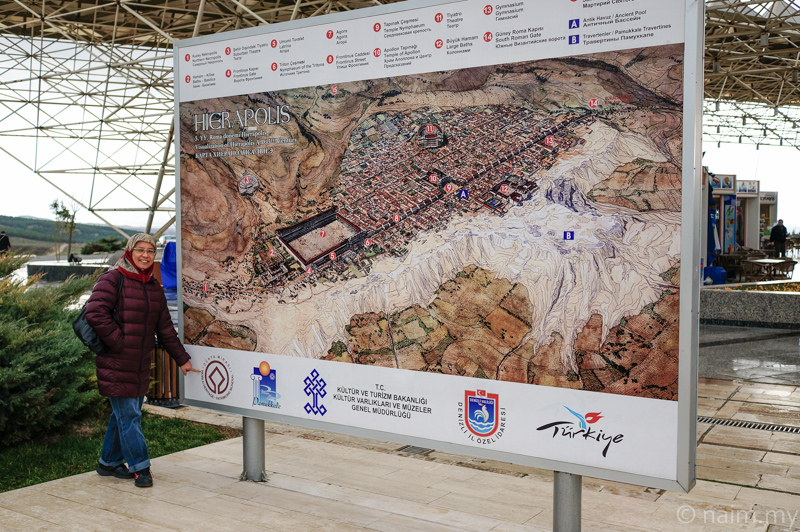 Map of Hierapolis as it was laid out. The long NW-SE main street is the main orientation and reference. 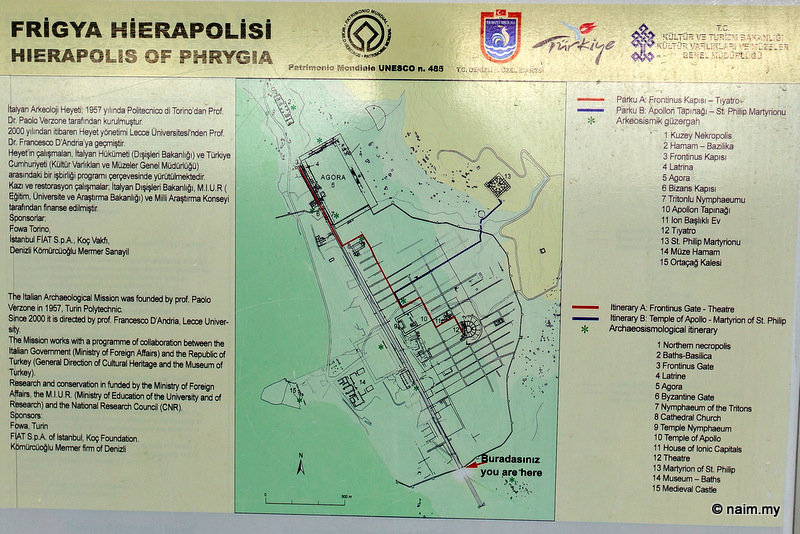 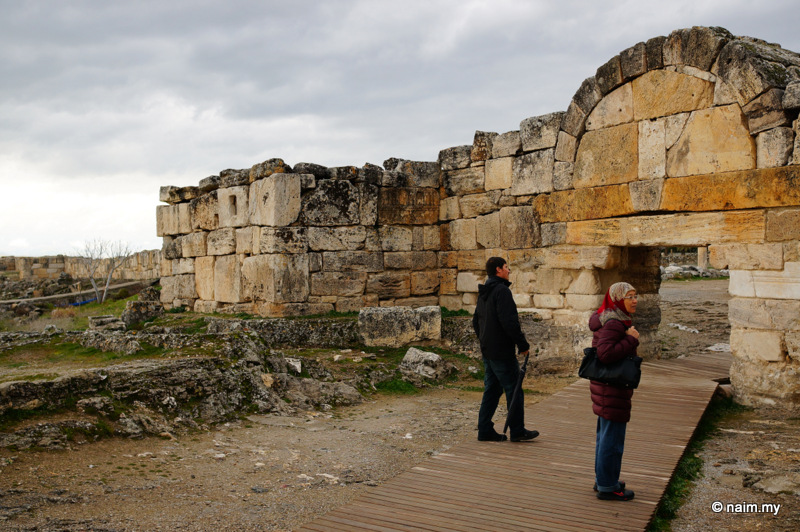 Once inside the city, we turn right and walk along the wall, uphill. I look back to admire the valley beyond, with the Southern Gate to the left. 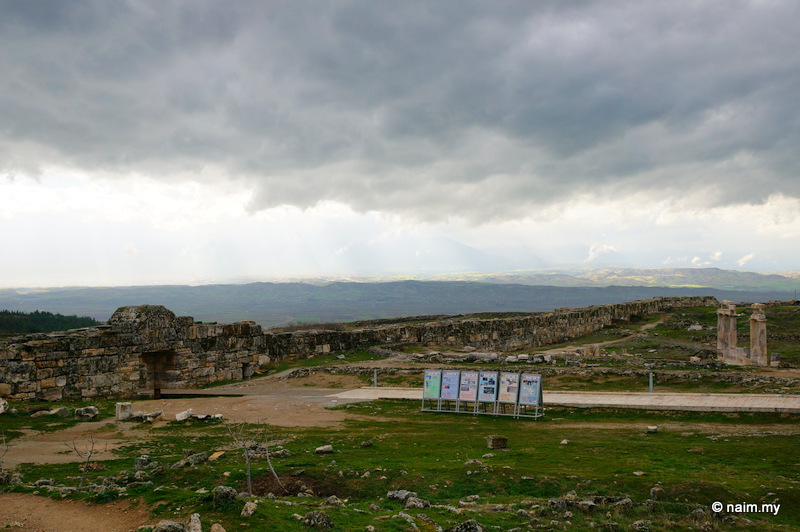 This site used to be packed with buildings, now all gone. Only rubbles remain. 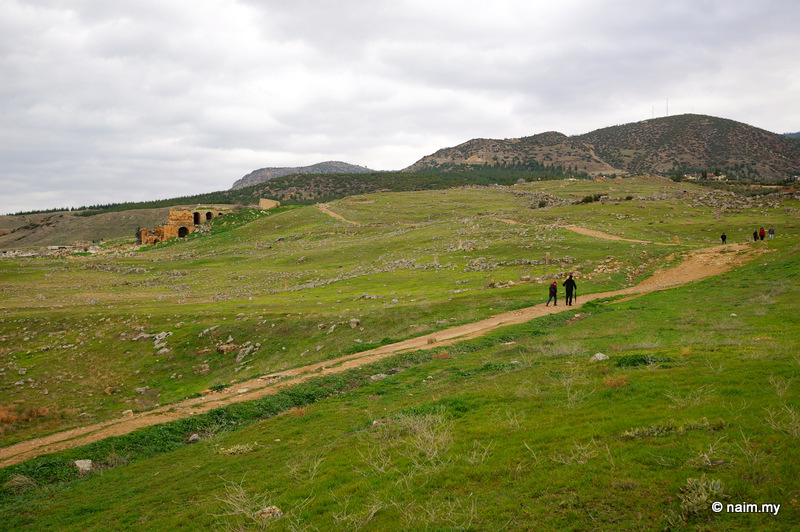 Hierapolis was hit by several major earthquakes, and plundered by invaders.  At its prosperous peak it probably had up to 150000 people, a large city by ancient standard. 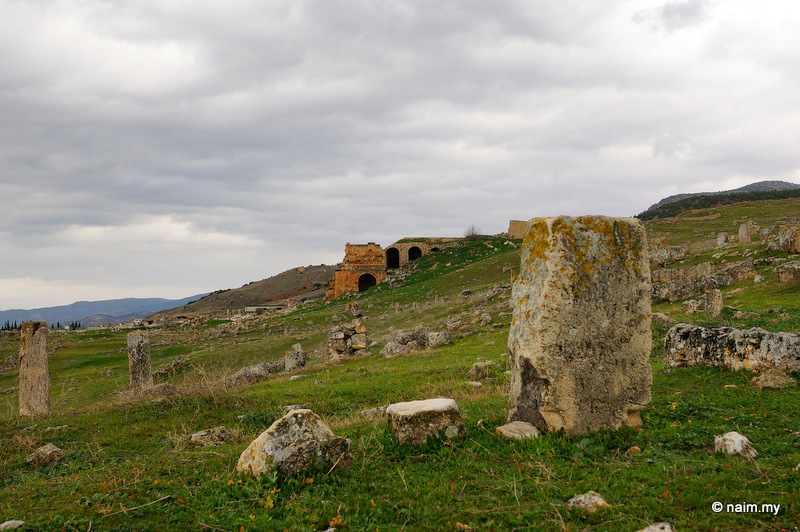 By the early 1300s the city was abandoned, and a major earthquake in 1534 demolished what was left standing. Nobody cared till excavations began in late 19th c. 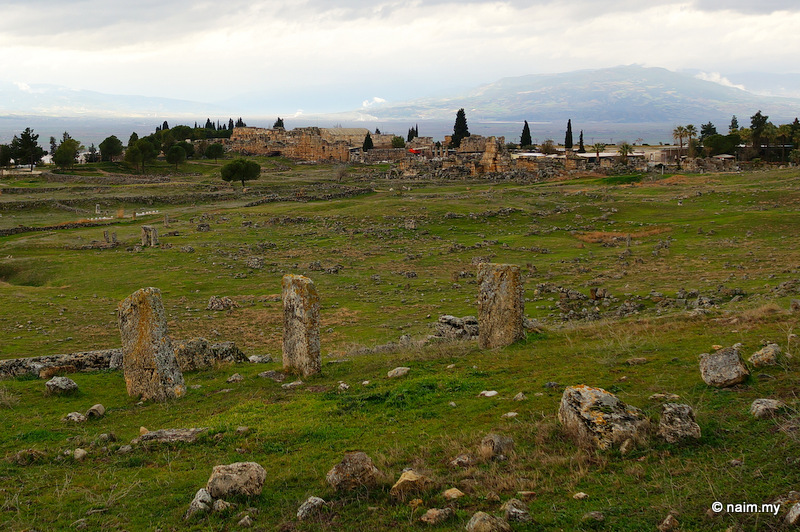 The long trail from the Southern Gate leads uphill to debris of once majestic buildings. 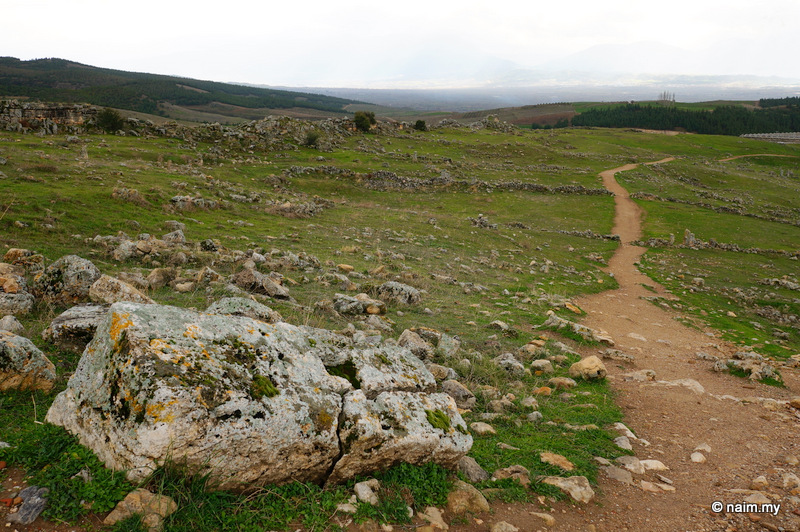 One can start spotting recognisable building objects, such as this one. 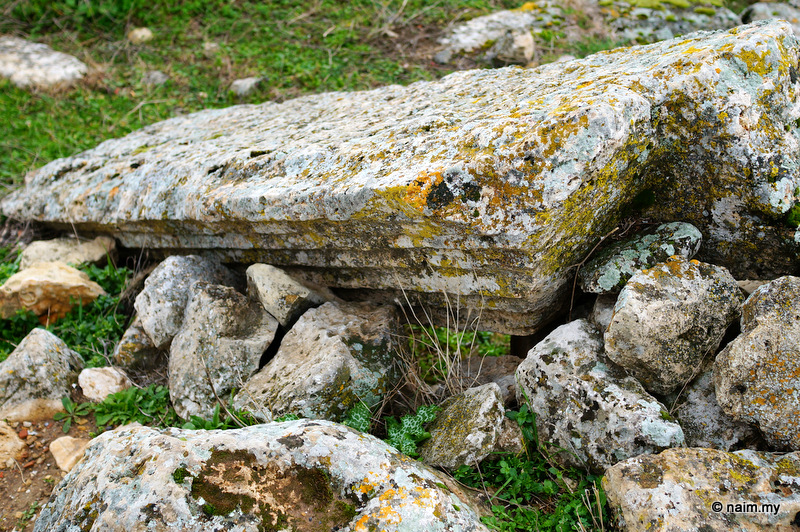 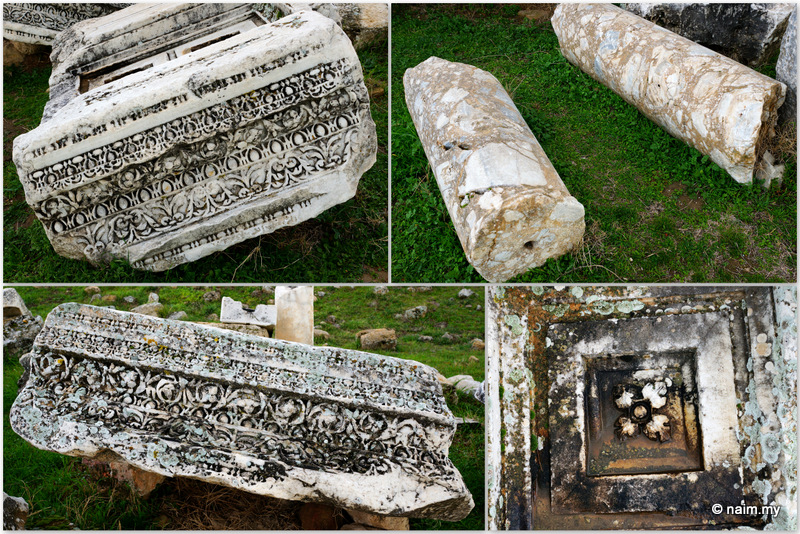 Greek words can be clearly seen on these items, probably placed on building facades. These are about 2000 years old, from the Hellenic period. 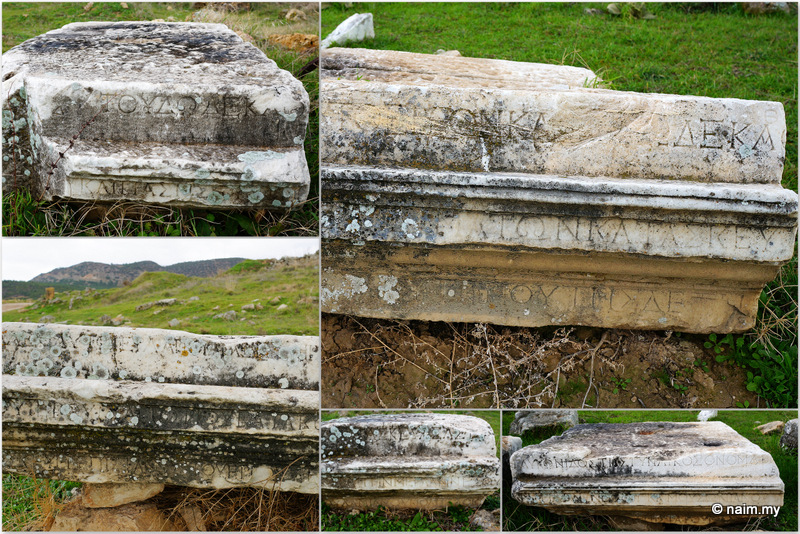 Of course, an amphitheatre is a must for any respectable Roman city, and Emperor Hadrian built this one. Estimated to have seating for 15000 people, and since Roman practice dictates that any theatre must have capacity for 10% of the population, so we reckon the population of Hierapolis was 150000 at that time. 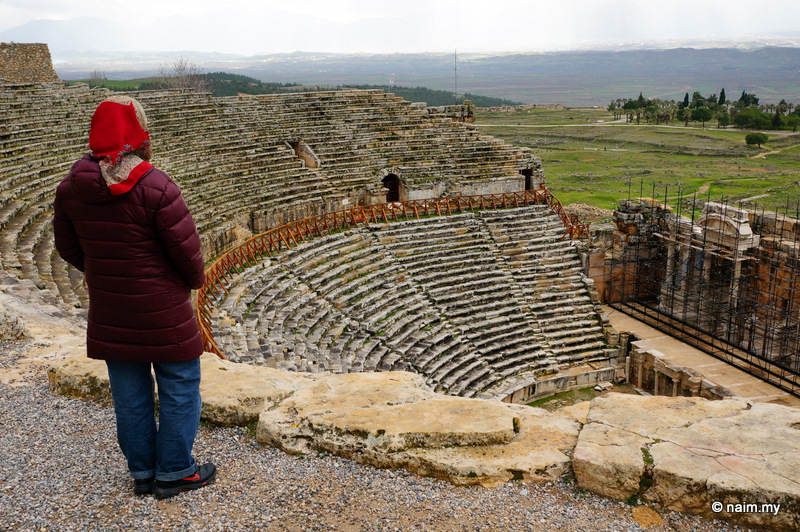 Some interesting details about this theatre. 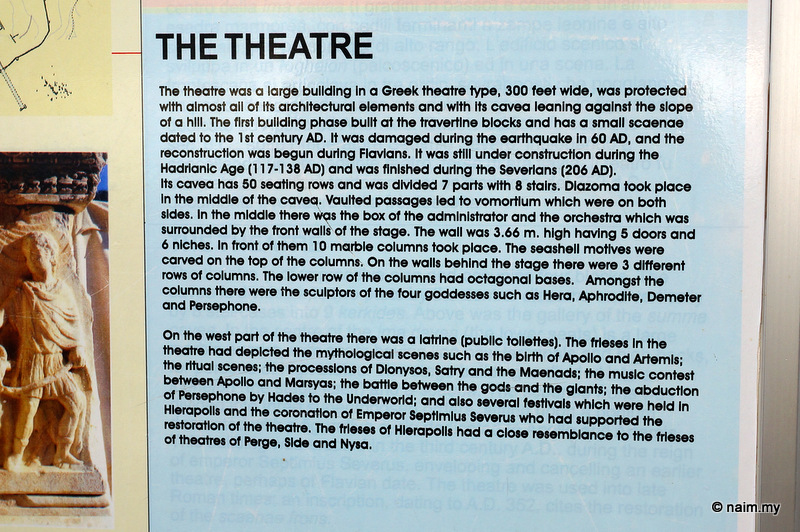 Can you imagine being here 1500 years ago, and watching a lion mauling a gladiator, or maybe a gladiator slaughtering another? 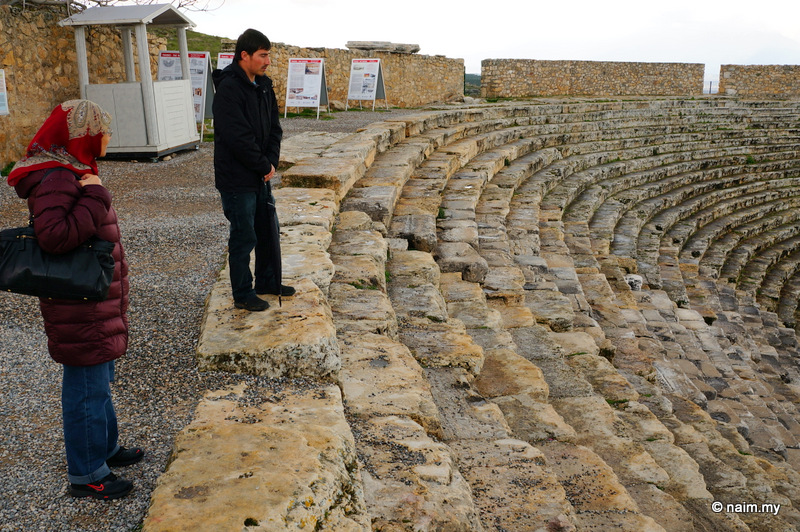 Definitely reminds me of Monty Python’s “Life of Brian”, esp. THIS SKETCH. 😀 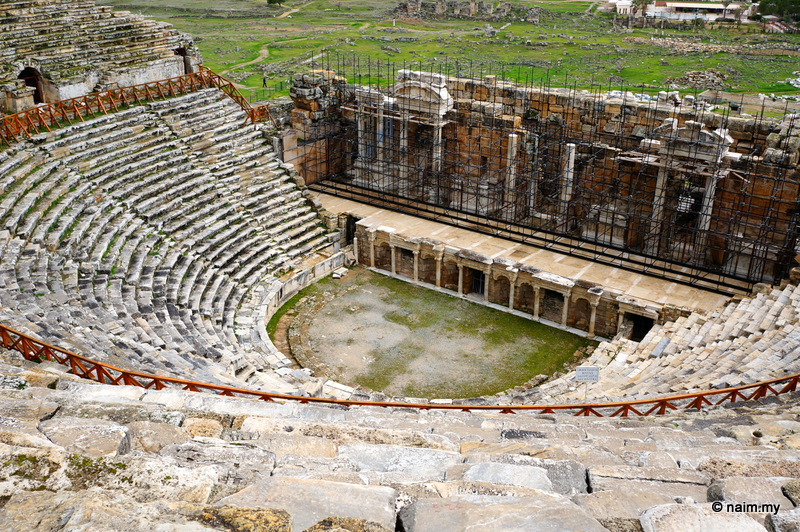 Outside the theatre I find this interesting plant — looks like one of those growing on very cold wind-swept hillside, which is the case here indeed. 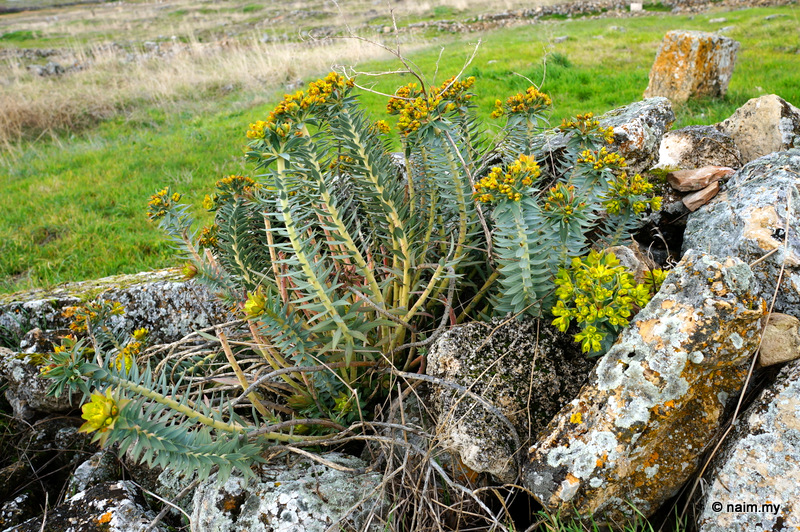 More ruins, and it takes a bit of imagination to see a city full of buildings and people here. Called Hierapolis — meaning ‘Holy City’ say some people — because it has a large number of temples, it was actually a luxury spa resort town. Medical and religious tourism must have been huge those days. 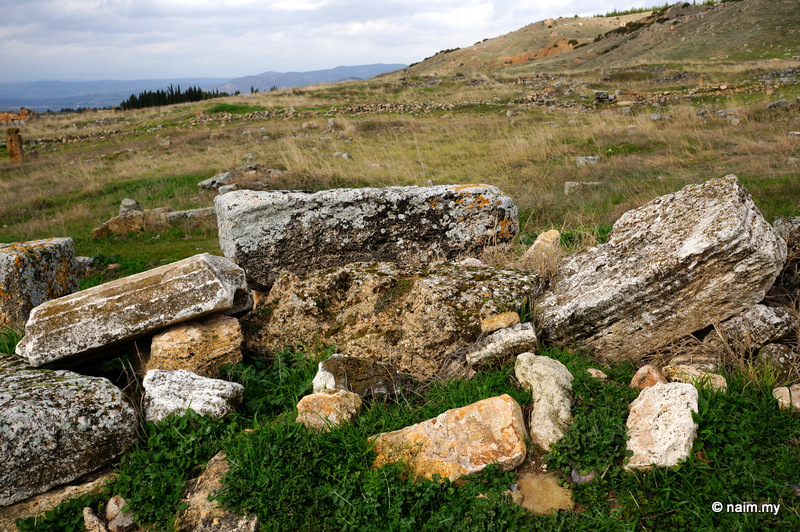 More puzzles to keep archaelogists busy for decades. At its height, Hierapolis had a large Jewish presence too, about 50000 of them. 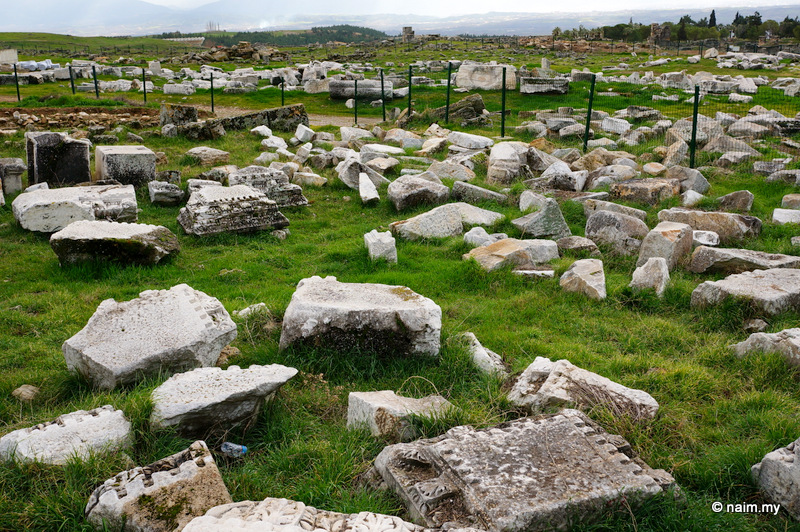 Excavations since late 19th c. has been nonstop and ongoing. There are always restoration works in progress. 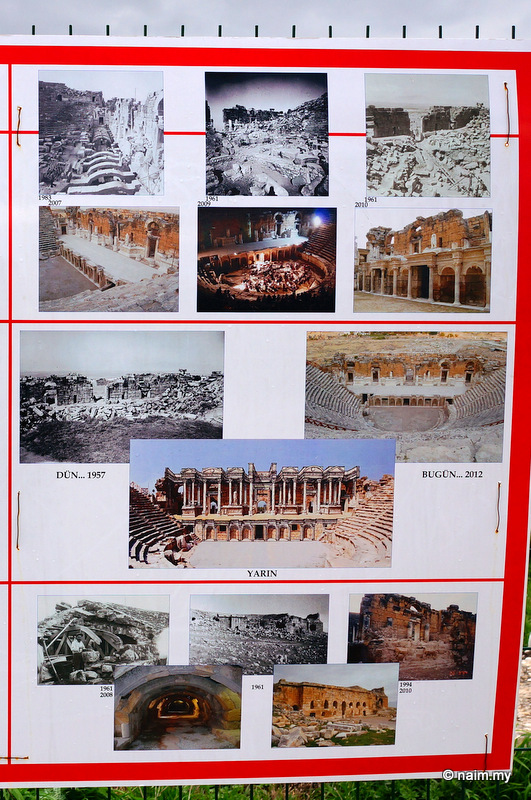 We eventually approach the main street of Hierapolis, with its busy signage. 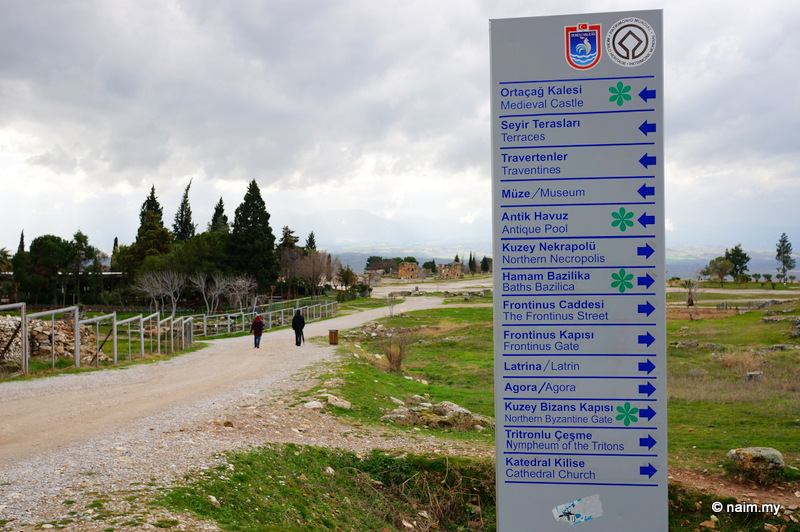 On the reverse side, equally busy. 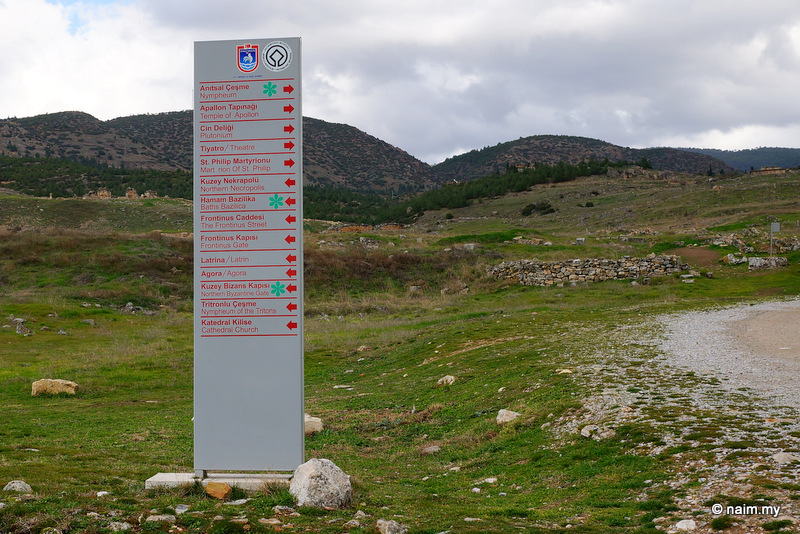 Nearby, the remnants of Temple of Apollo, built in 1st century AD for Apollo, the patron God of Hierapolis, some say the founder of Hierapolis. 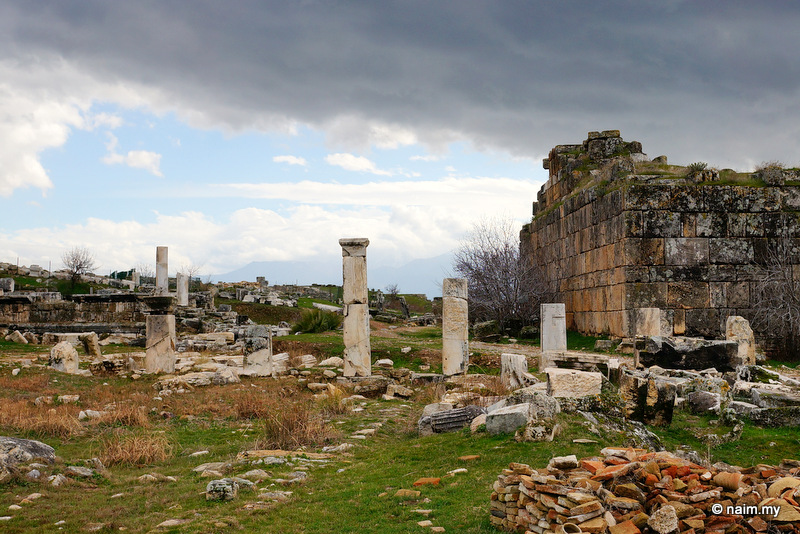 In front of Temple of Apollo, the Nympheum, 3rd century AD, a temple for the nymphs — female nature deities in Greek Mythology. Water to the houses in ancient Hierapolis was distributed from this site, lending it the aura of magical sacredness. 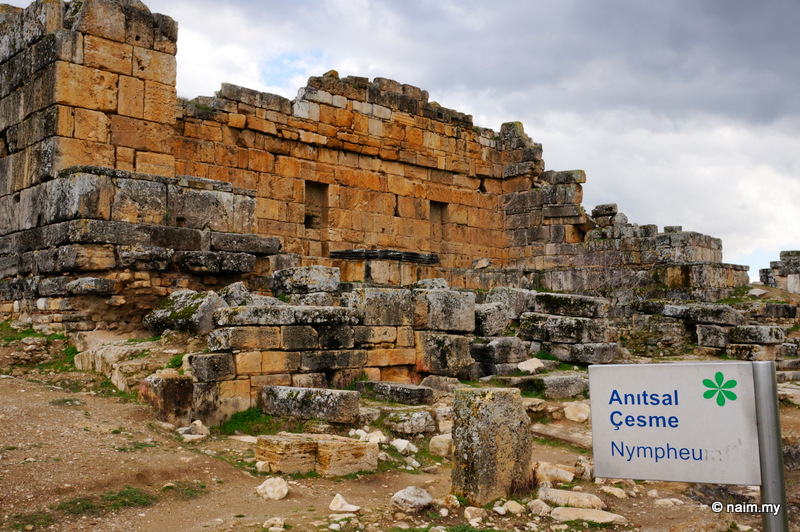 And yes, the work is never done for the excavators. 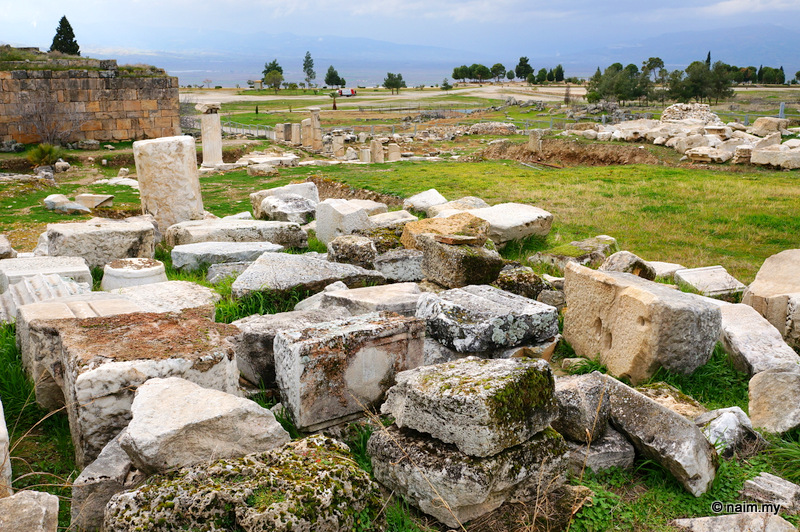