We continue with our delightful stroll along the main street of Hierapolis, the ancient Greco-Roman city founded 2nd century BC, taking in all the sights and real history it has to offer. 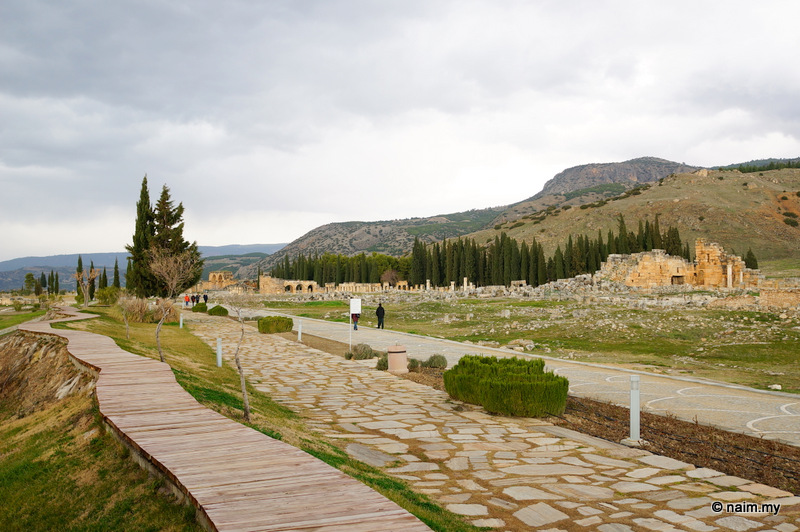 To my left a fantastic view of the plain, the same fertile land the Greeks and the Romans lorded over some 2000 years ago. 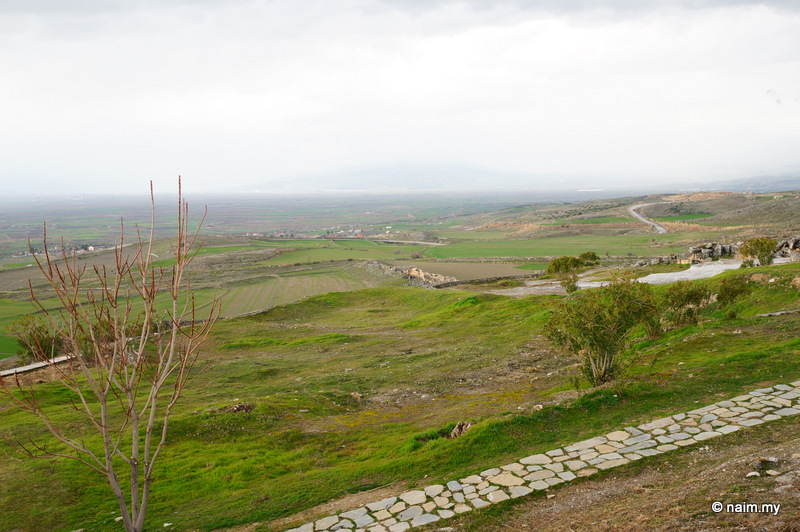 Definitely not Roman, but a nice juxtaposition to the awesome history around it. 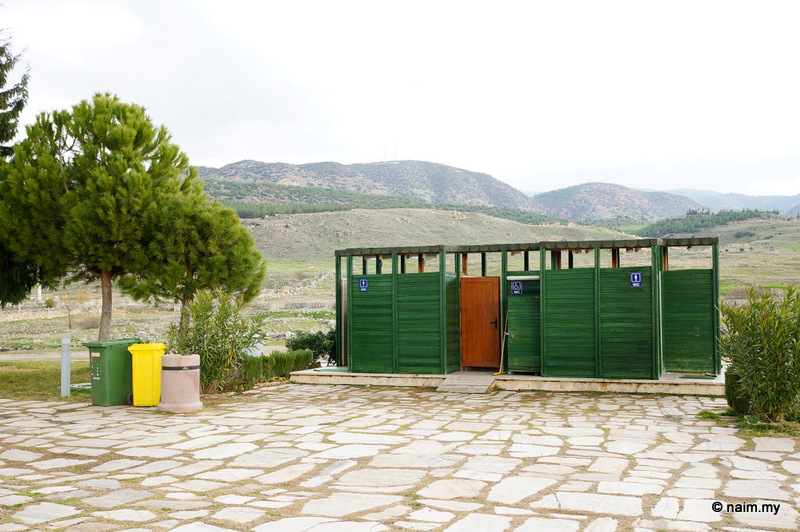 We amble over to the Northern Gate, just like the Southern Gate, a Byzantine structure from late 4th c. AD. 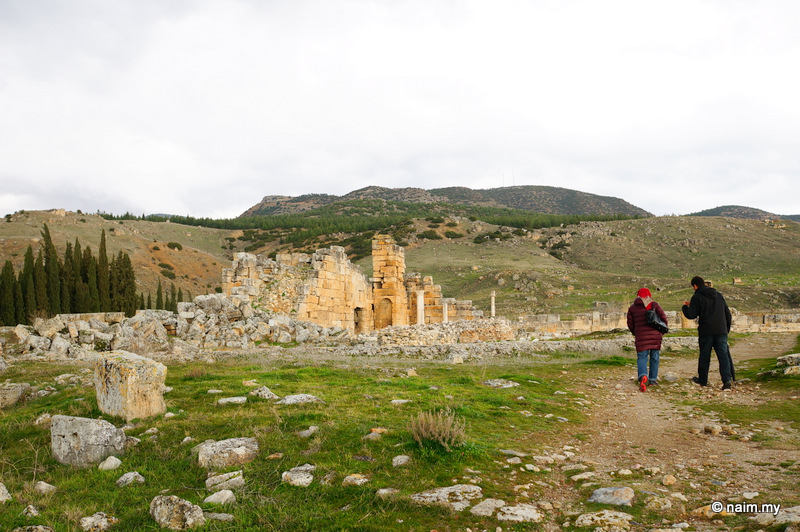 To my left, something interesting. This used to be a Roman drain, but after almost two thousand years, the minerals in the spring water which it carried were slowly deposited, and solidified to form a sort of raised water conduit. 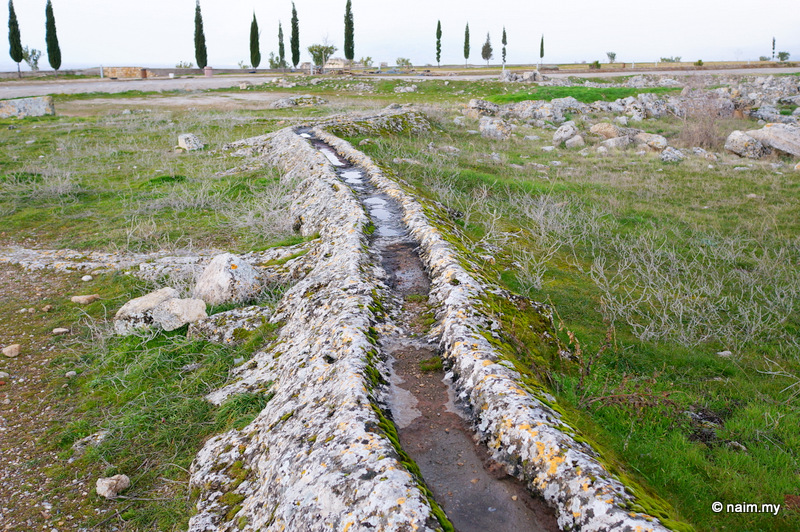 I am on the main street of Hierapolis, called Frontinus Street, first laid in 1st c. AD, with original width 14m. Then in 5th-6th c. additional buildings were built, narrowing the street to just 8m wide. The pillars seen below are facade of the Nymphaeum of Tritons, a monumental fountain of the Roman period, built 3rd c. 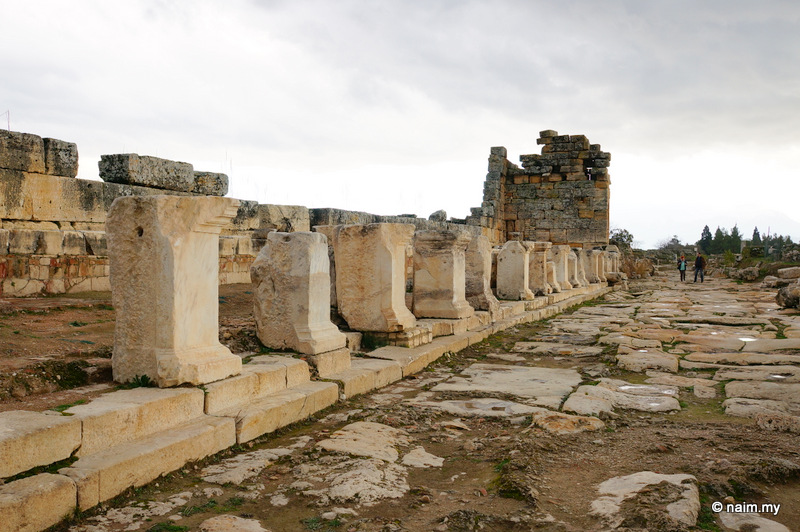 We approach the Southern Gate — as significant as the Northern Gate we used to enter the city earlier. Fortification by the Byzantine Romans. 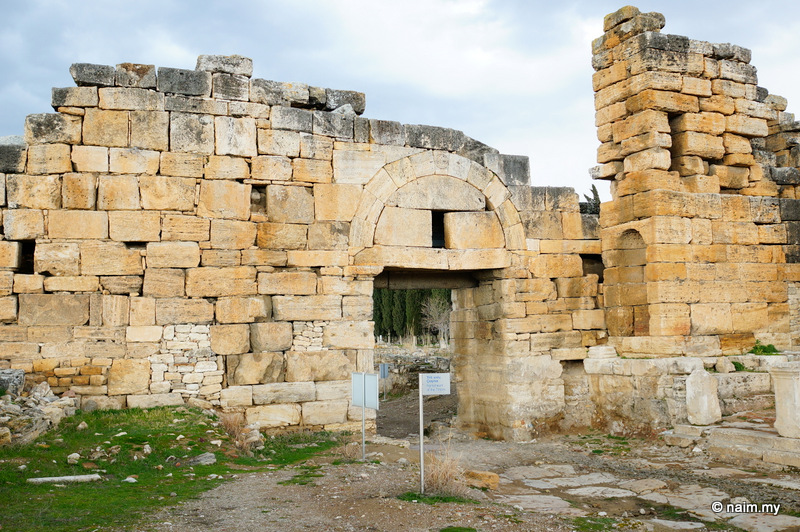 Sometimes we just have to wander among the ruins to try to appreciate the whole thing, something somewhat unimaginable. 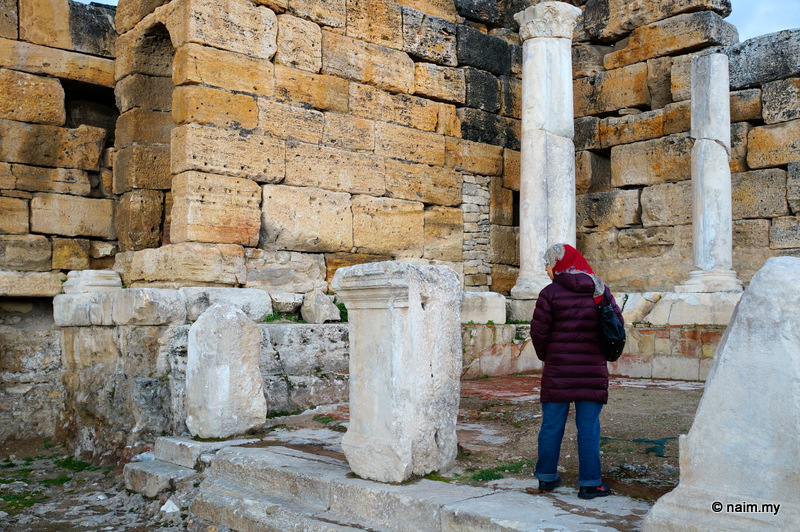 Quite narrow this Southern Gate, and that’s the outer city out there. 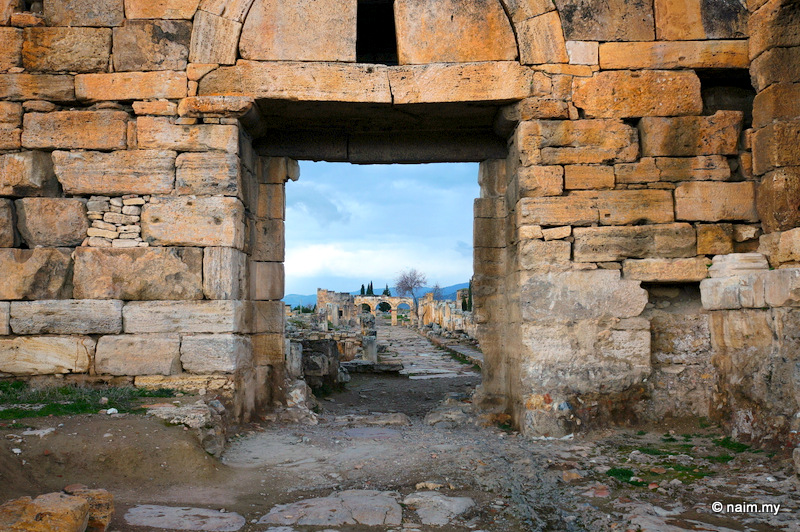 We pass through the gate and glance back for its outside view. 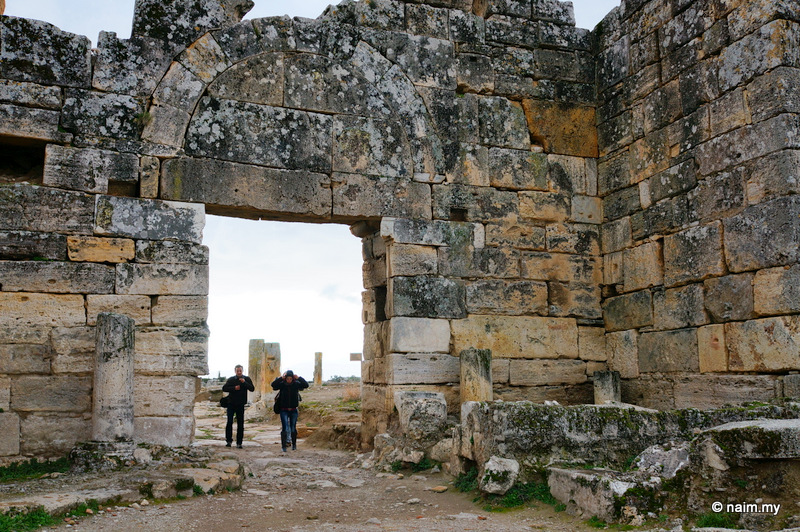 The northern part of Frontinus Street lies ahead, with ruins of various structures flanking it, normally porticos, collonades, shops and amenities. 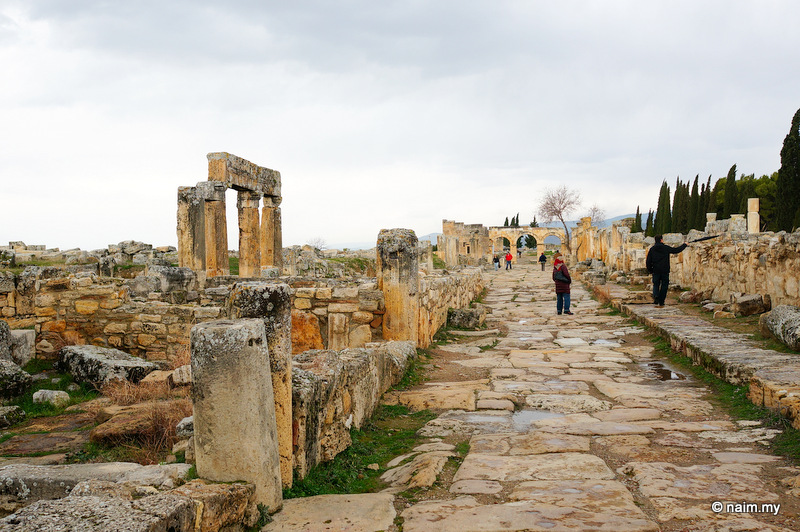 To the left, what’s left of some stately buildings. 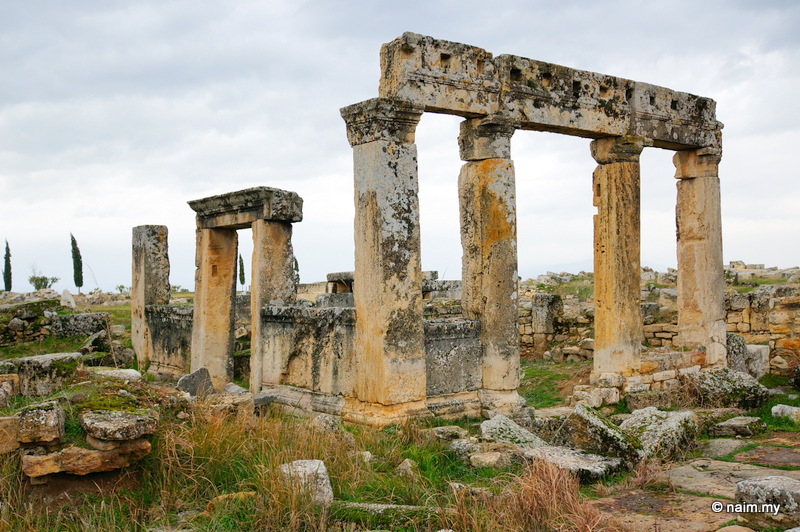 And something interesting on the right, and we are approaching it. 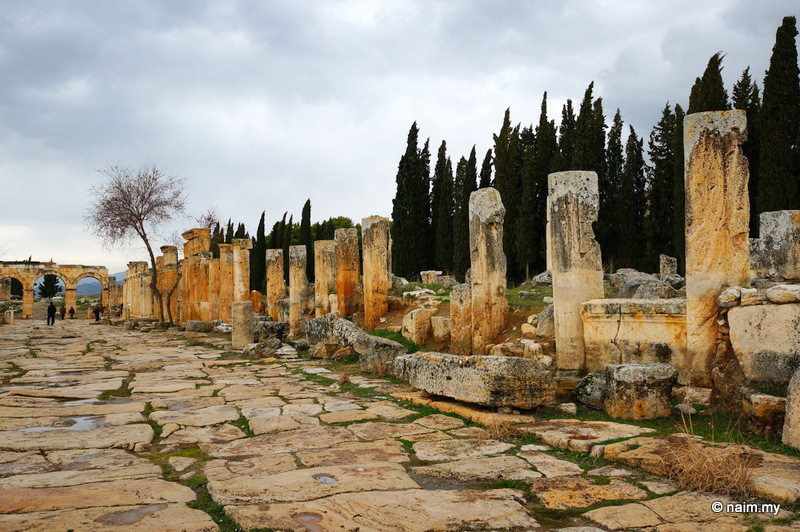 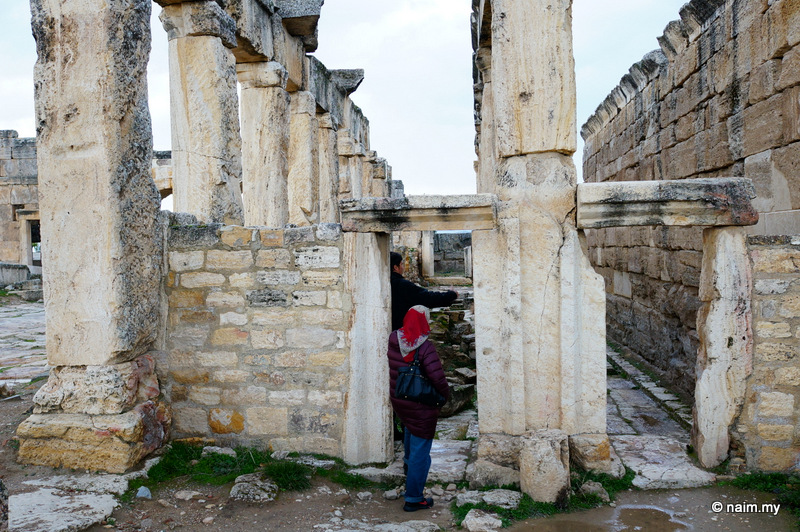 Of course back then there were toilet seats with holes and running water — it must have been a respectable and comfortable establishment. 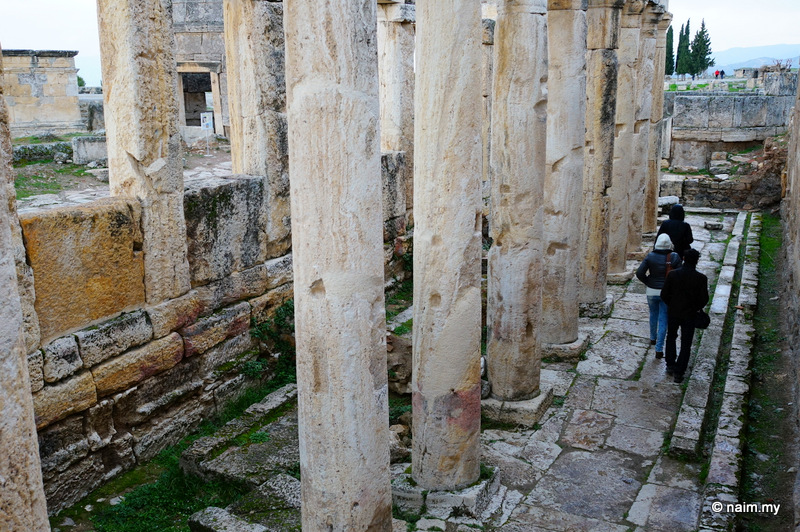 Imagining life as a Roman, after easing myself in luxurious setting, I would step out of the latrine to cross busy Frontinus Street, and to enter a shopping area via its stately porticos. 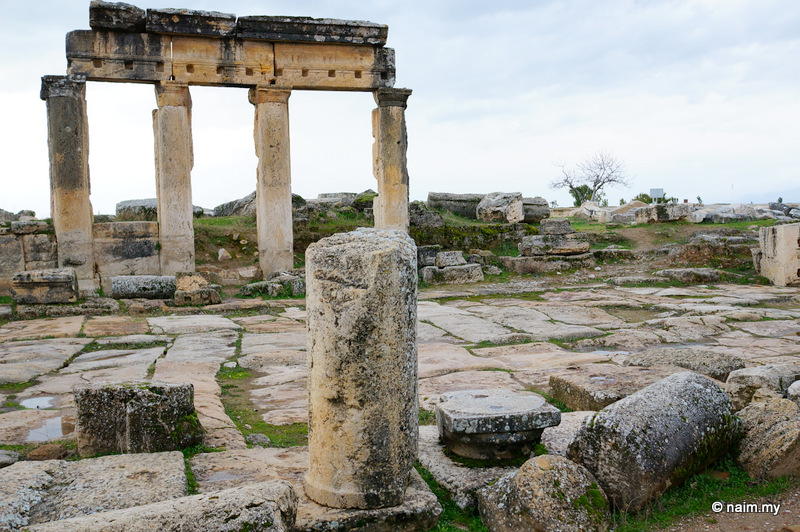 Looking lonesome, a Corinthian column, Greek from before Jesus’s time, I think. 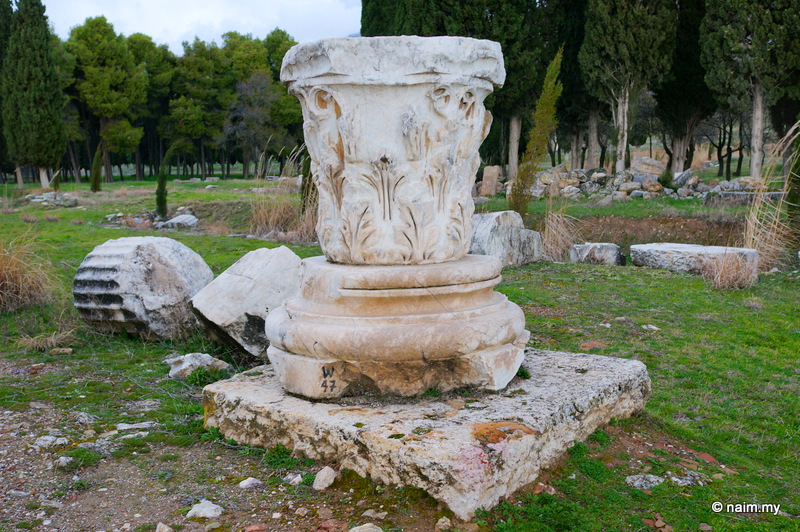 Out of the latrine, back on Frontinus Street and another gate — Domitian Gate. This is probably the border of metro Hierapolis of Phrygia. 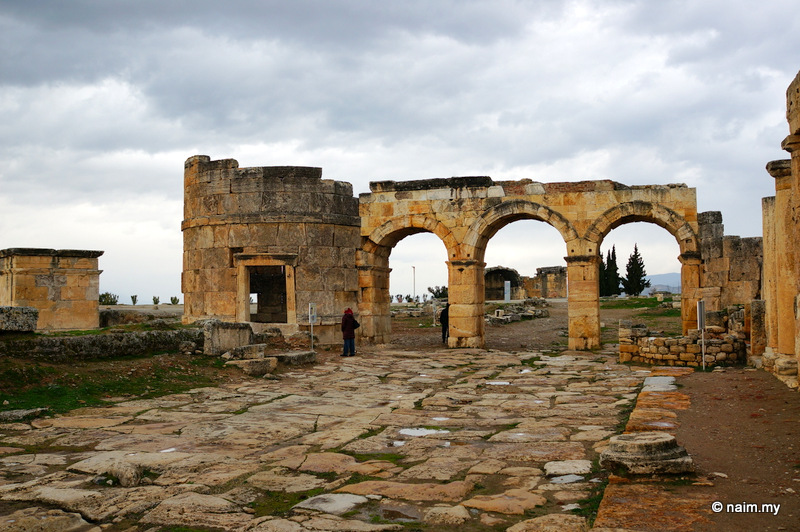 Past Domitian Gate and another busy signage to guide present-day visitors. 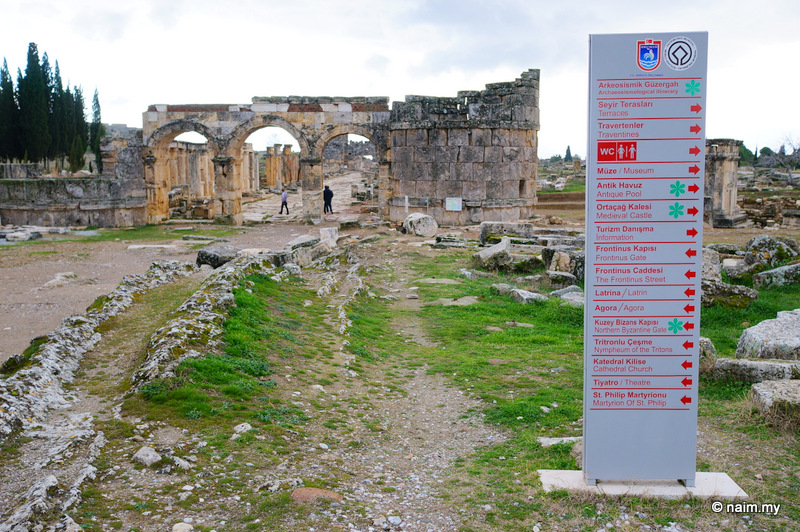 Just outside Domitian Gate and Hierapolis proper, the Basilica Bath — initially a 3rd c. bath complex to cleanse and purify people entering the city of Heirapolis, later converted into a church. Even in the old days, the Greeks and Romans were very particular about the hygiene of their cities. 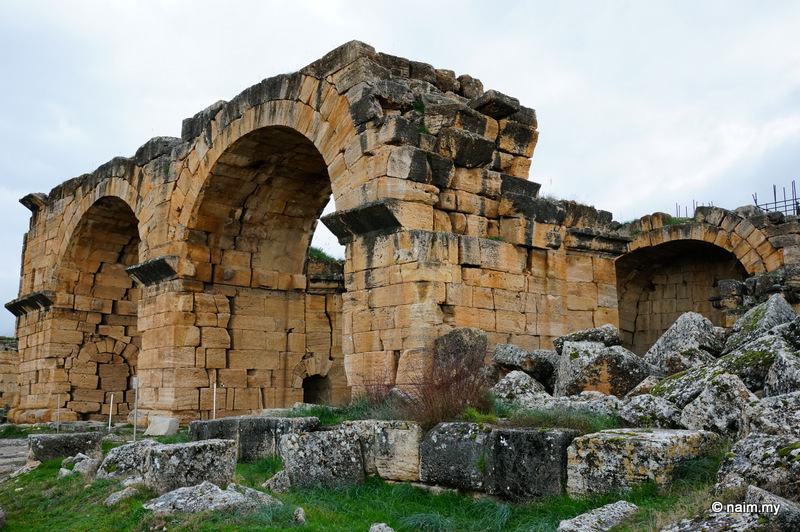 Beyond the Basilica Bath, an intriguing area of any major Roman city – the necropolis or ‘City of the Dead’.  Hierapolis has two large ones, and we are in the Northern Necropolis. It’s full of sarcophagi, made of limestone or marble. They are simply stone boxes to put dead bodies in, normally above the ground. It’s quite a surreal sight! 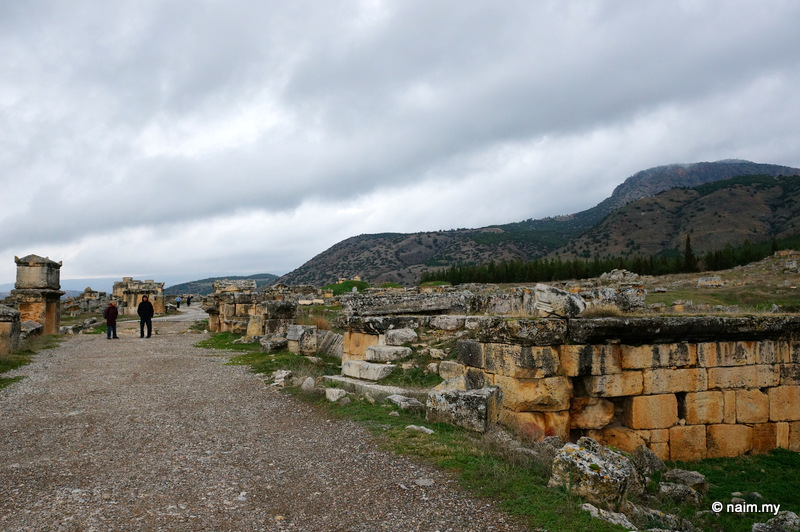 Sarcophagi litter the landscape, but now in ruins, thanks to grave robbers, and earthquakes. 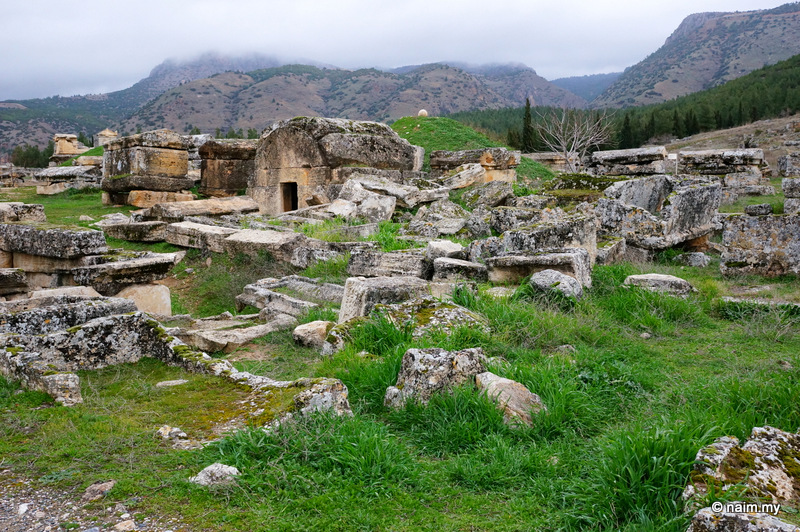 In Hierapolis, a Roman is not buried in death, but placed in a sarcophagus. Some of the dead’s possessions were placed together with the body, for use in the afterlife I guess. 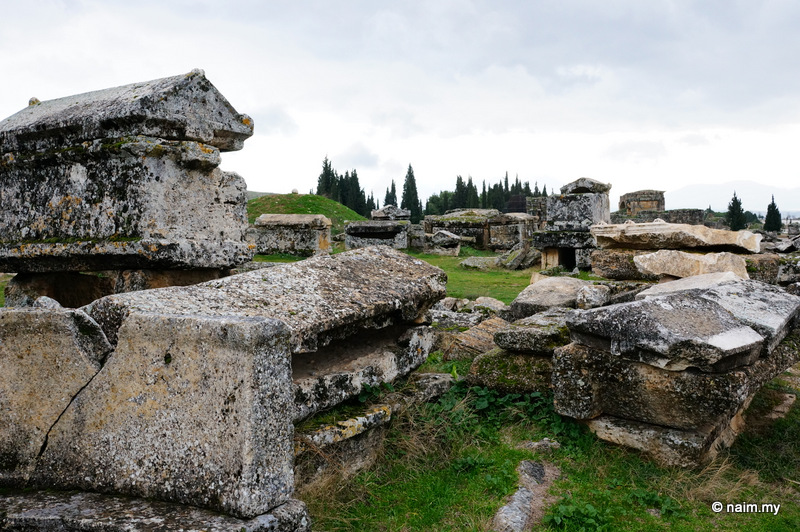 And thus robbers and thieves were greatly attracted. 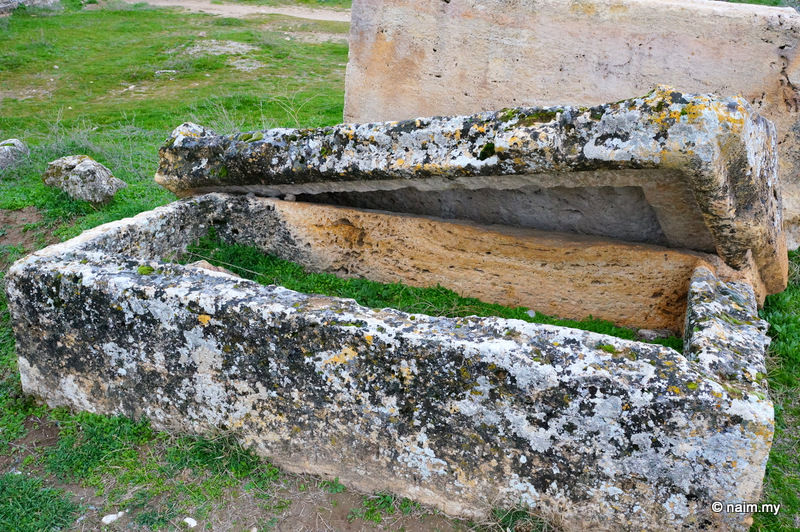 All the sarcophagi were broken into and desecrated — the contents all gone, even the remains of the dead. 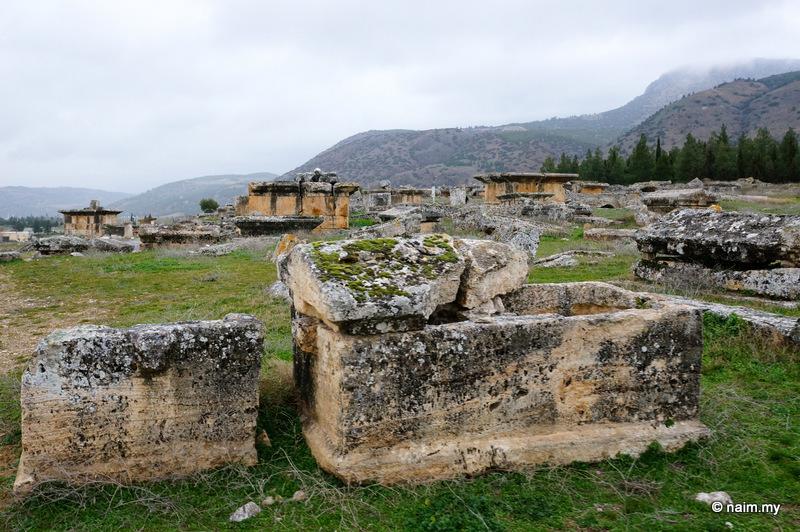 Important or wealthy citizens would have elaborate crypts or vaults for their sarcophagi. Even then, the odour of rotting corpse would permeate the air, so some scented plant or substance were put inside the sarcophagi to counter the stink. 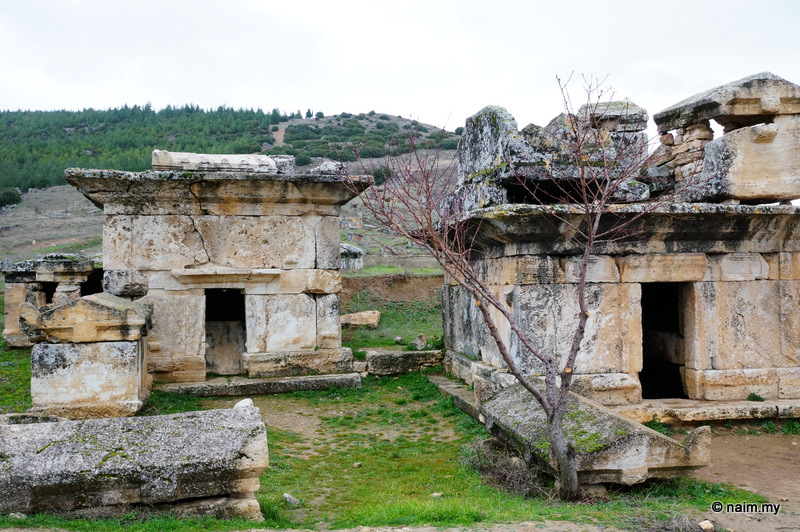 This must belong to a very important family, with the sarcophagi of subordinates placed atop the crypts. 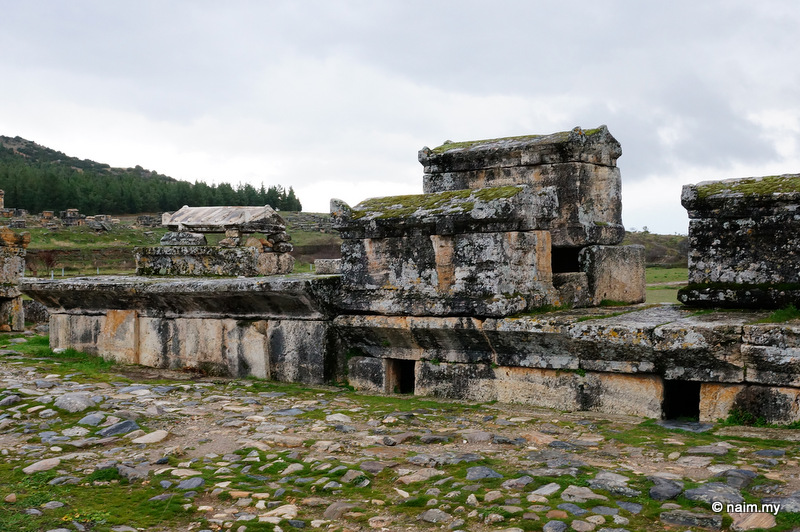 At last we arrive at the end of Frontinus Street in Northern Necropolis. There’s a car park some distance behind me, it’s very cold and drizzling, so we make a dash to our waiting vehicle there. 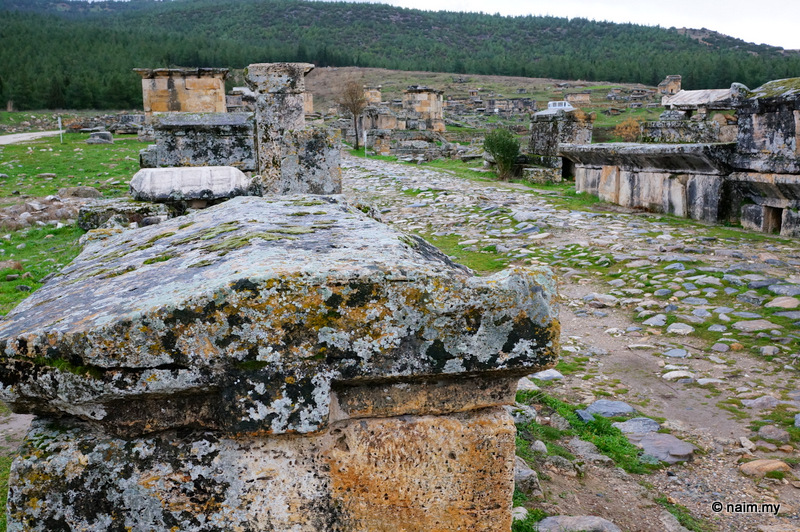 Now you can imagine how a visitor arrives at Hierapolis from the north. First he has to pass the huge cemetery, then cleanse himself at the bath before passing the Domitian Gate. There’s a latrine just after the gate in case he needs to ease himself. Then he enters Hierapolis proper via the Northern Gate. Such is a typical Greco-Roman city of 2000 years ago. Very advance indeed.