Some 50km south of Izmir lies the ancient Greco-Roman city of Ephesus (Efes), said to be the finest Roman ruins in the Mediterranean region, even better than those in Rome.  It’s very close to the famous Aegean seaside resort town of Kusadasi. 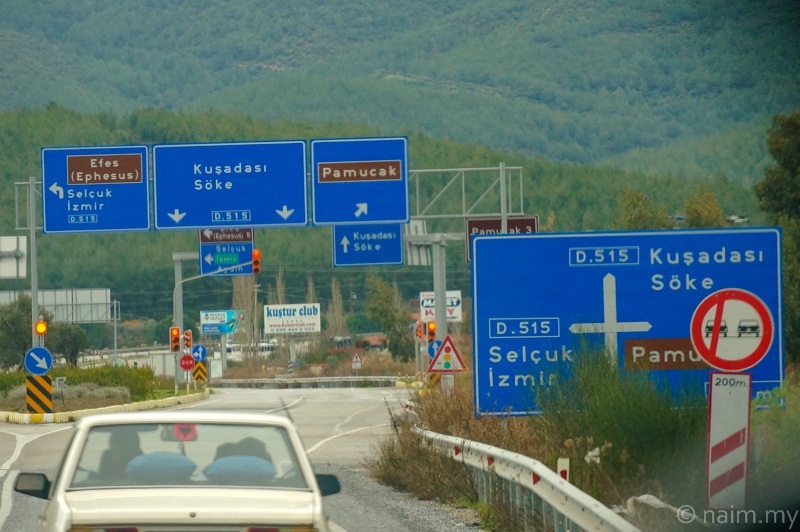 Like yesterday, Mehmet the Guide (right) and Muhammet the Driver (left) pick us up at the hotel, together with three Korean-Americans who have just arrived at Izmir Airport from Istanbul. From there, a brief stopover at Selcuk to collect a couple more people and soon we are on our way to Ephesus. 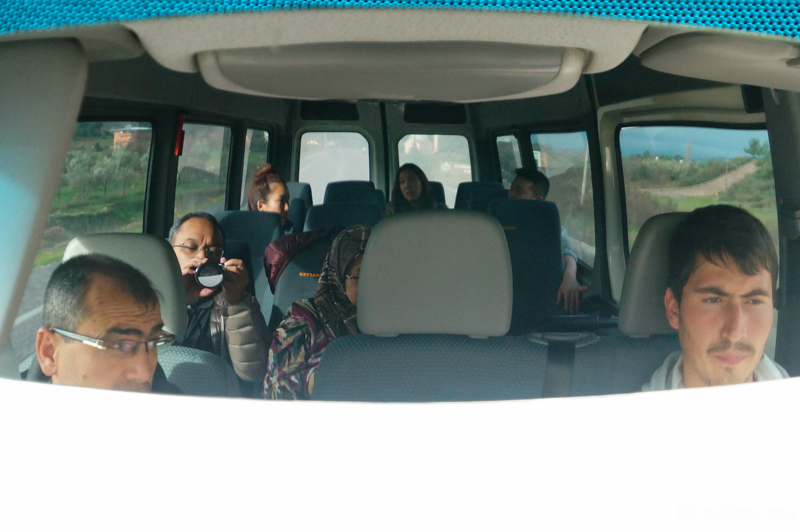 It’s drizzling as Mehmet does his best to give us an overview of this large Roman city, which was also a key port in the Mediterranean region. Ephesus was founded as an ancient colony way back in the 10th c. BC by the Ionians, one of the four original ancient Greek tribes. At its peak it had 250,000 inhabitants in the 1st c. BC, a very large number for a period 2,000 years ago. Alexander the Great was here in 4th c. BC, while Mark Antony visited with Cleopatra in 41 BC, and I arrive in 2013 AD. 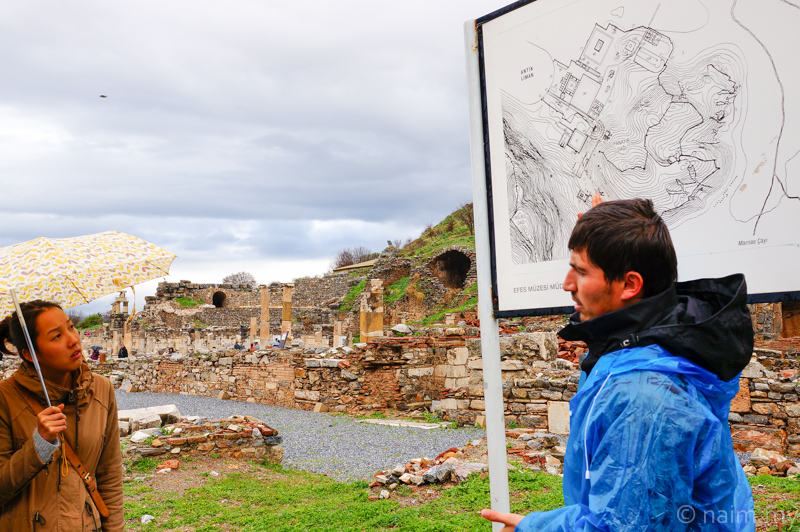 For orientation, please refer to the following graphic — we start at the Second Entrance, extreme right, and walk from (28) all the way to (1) and exit.

This is a rendition of Ephesus in its hey-days — what a grand place it must have been. Again our walk starts at extreme right, go all the way to the left, then go up past the amphitheatre, towards the harbour (no more there now) and exit. Ephesus was ravaged by earthquakes and pestilence — the Seljuks (forerunner of the Ottomans) finally abandoned it in the 14th c. when the harbour was silted up.

We begin to explore the ruins in earnest, but I detect a distraction. 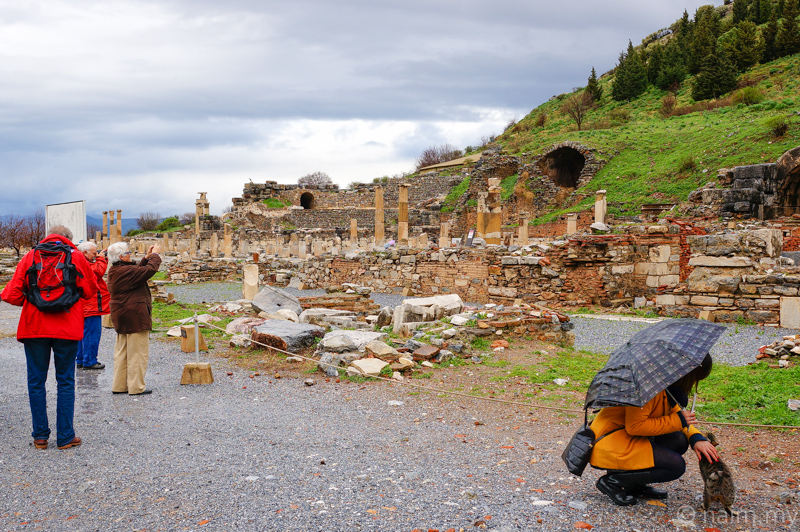 Yes, free-ranging independent cats, mostly cuddly and friendly, but looking healthy and well-fed. I shall call them Cats of Ephesus. 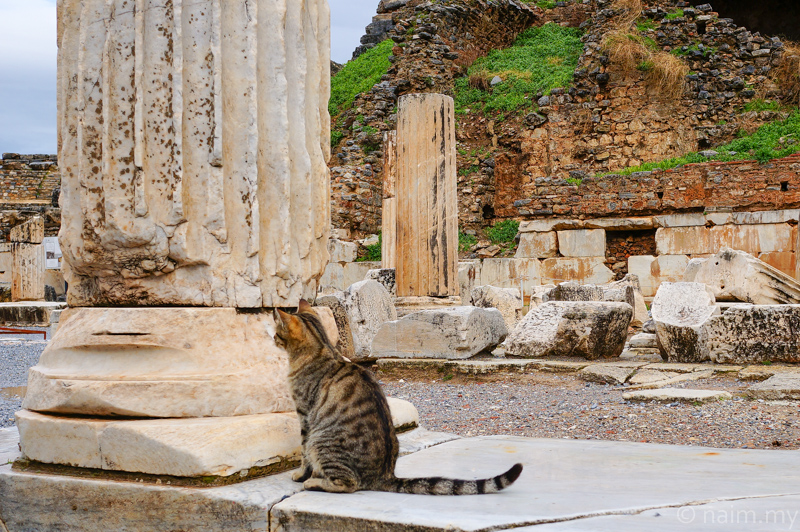 Imagine if you will, some 2,000 years ago, a big city to the right, with promenades and porticos and walkways and arches and pillars, while to the left, houses of the common people stacked up the hill-slope all the way to the top, where a protection wall stood. 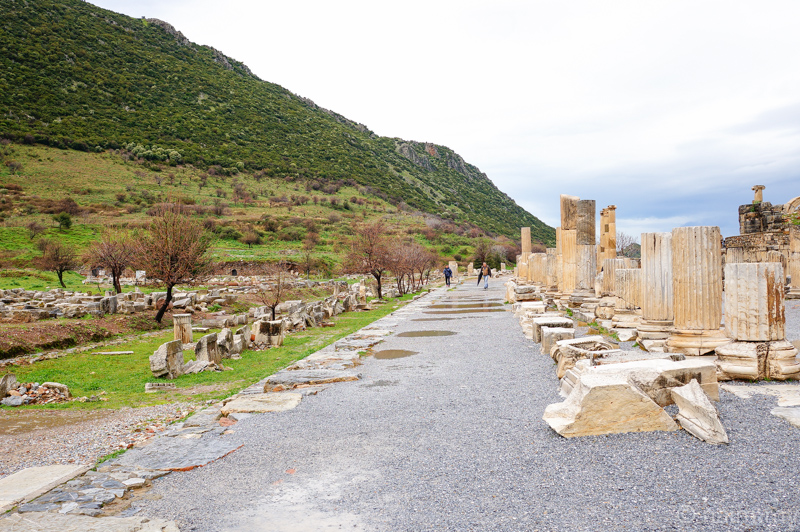 Marble pillars of a colonnade line this outer path, and to the right, the wall of a building from the Greek period. It’s a common theme with these ruins — founded by the Greeks (or their predecessors), to be taken over by the Romans, Byzantines and finally the Ottomans. 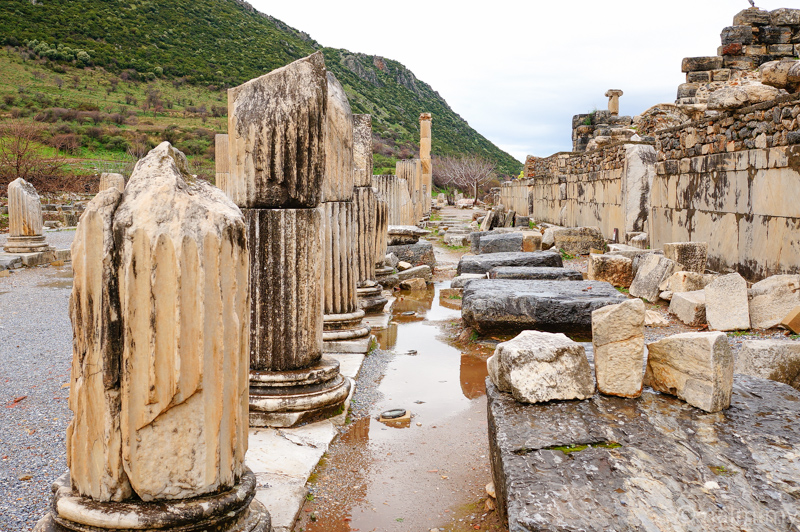 While Hierapolis owed its existence to the therapeutic spas of the Cotton Castle, Ephesus came into existence because of a splendid natural harbour at the Aegean Coast, which was also the end-point of the Silk Road from China.  This is Bath of Varius, built 2nd c. AD, with cold, warm and hot water supply. 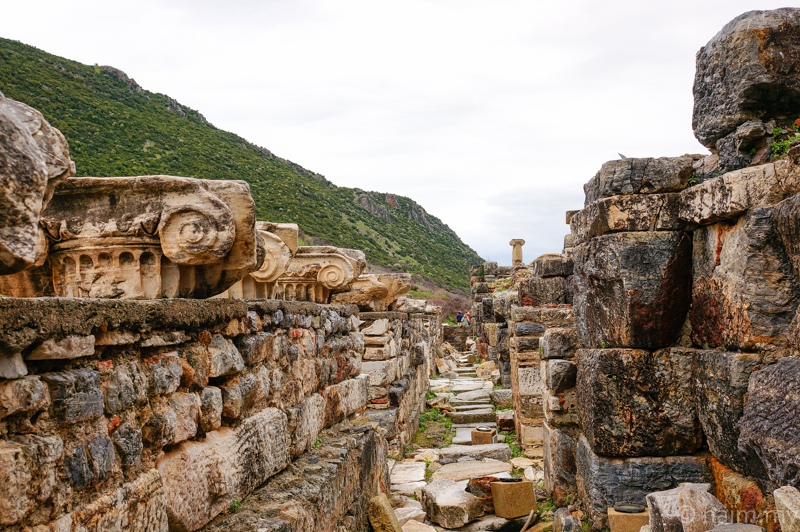 This theatre is Odeion, the meeting place for the city council and politicians. 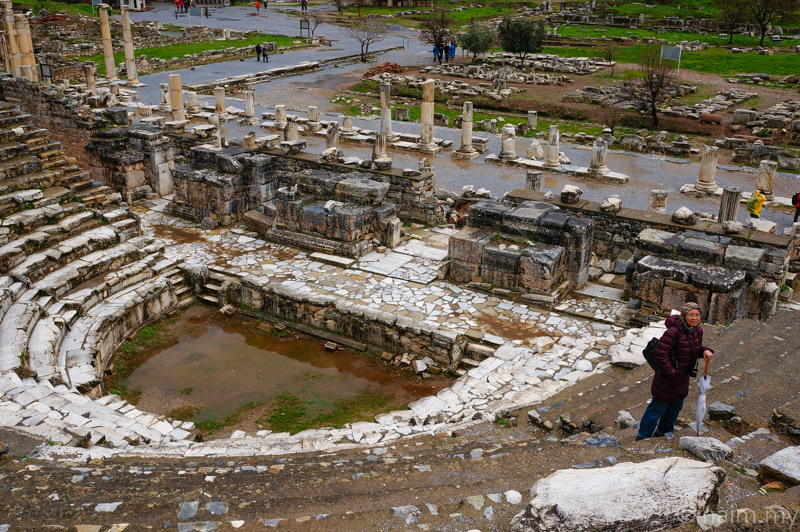 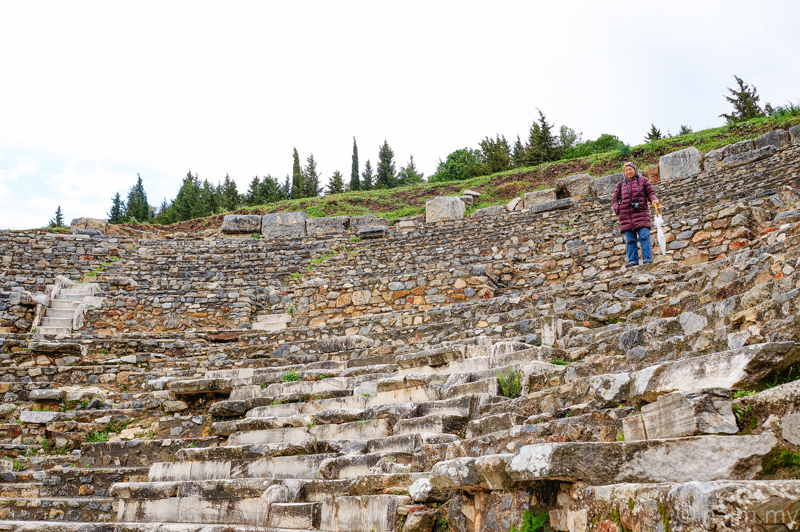 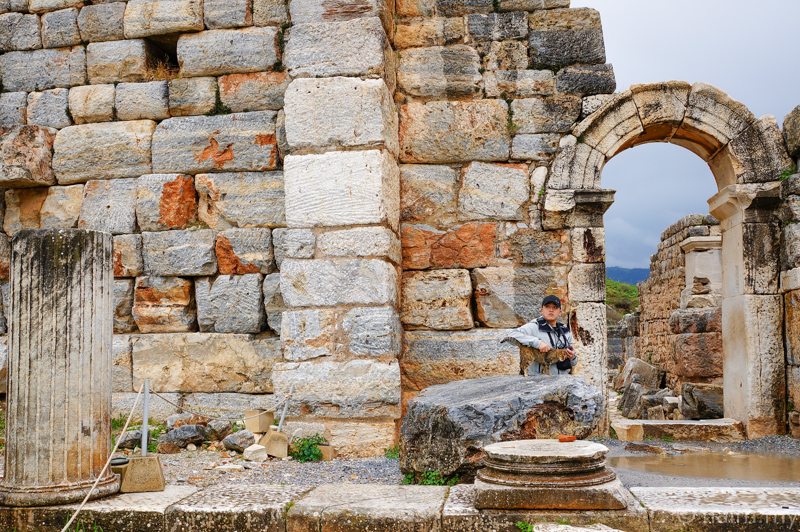 Ionic and Corinthian columns, from the Greek period. 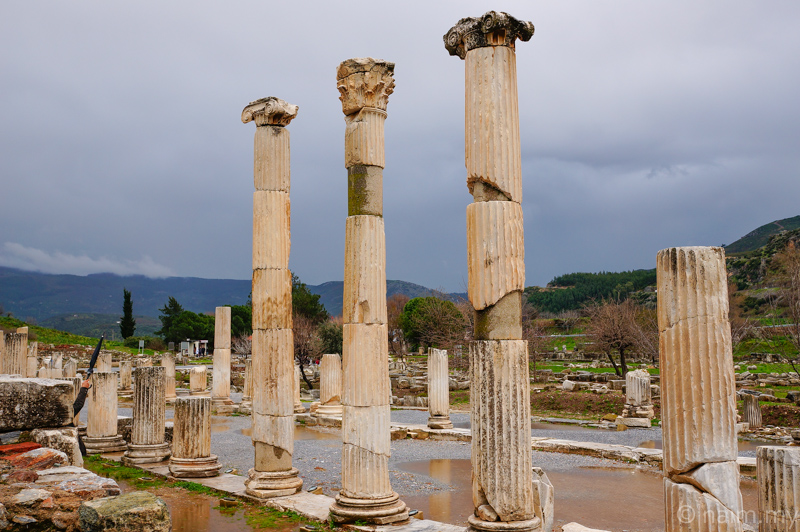 Truly amazing, this living museum, as we walk down the path, observing and visualising how things were some 2,000 years ago. 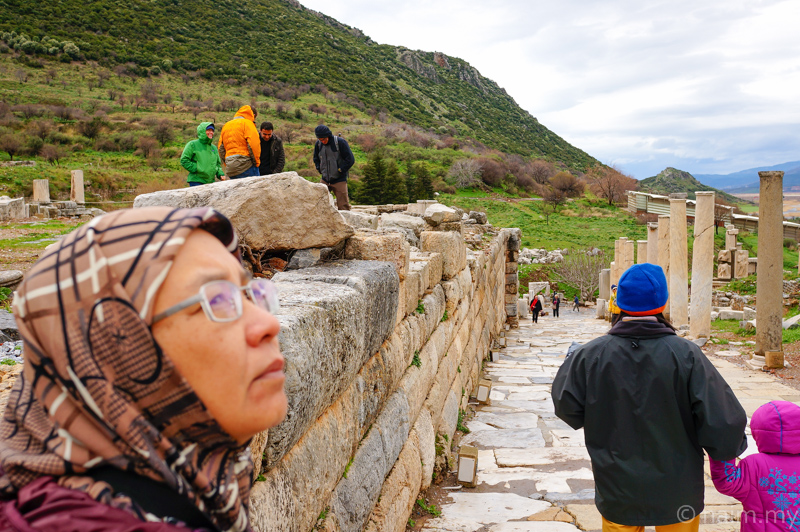 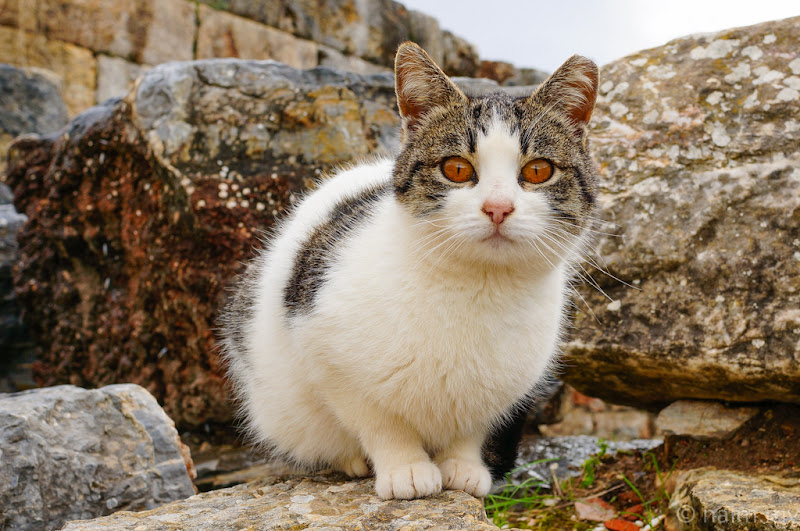 This is the original Hermes — Olympian god in Greek religion and mythology, son of Zeus and the Pleiade Maia. In Roman mythology he is known as Mercury … and yes, a planet is named after him. Note his staff and winged sandals. 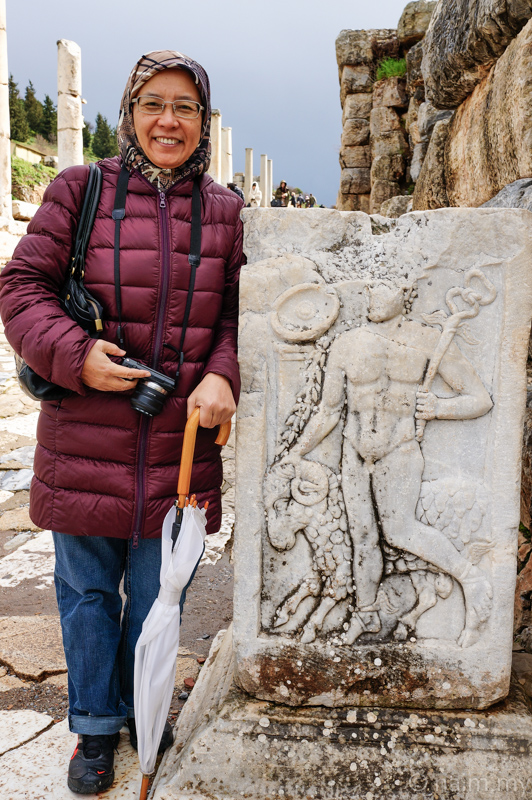 Another engraving of Hermes, minus the winged sandals. 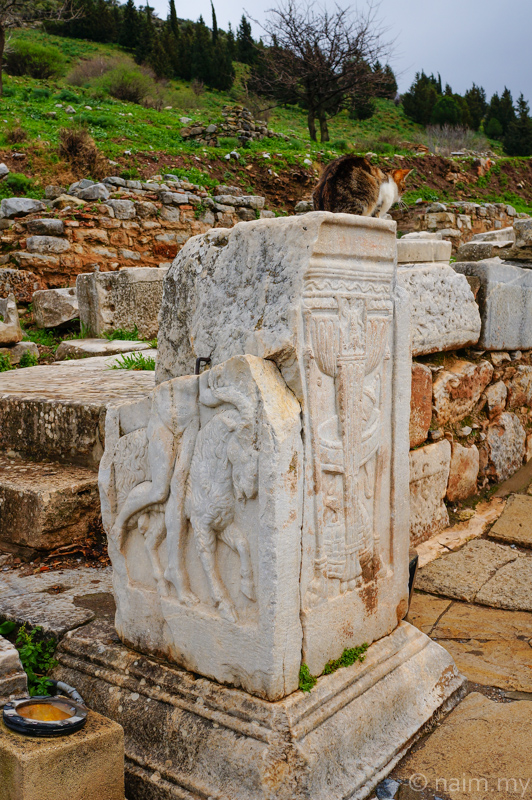 Nearby, a fellow VIP — Nike, the Roman Goddess of Victory — left hand holds the laurel wreath, a symbol of victory, right hand a stalk of wheat, and she’s flying … and that’s why we have shoes called ‘Nike’. 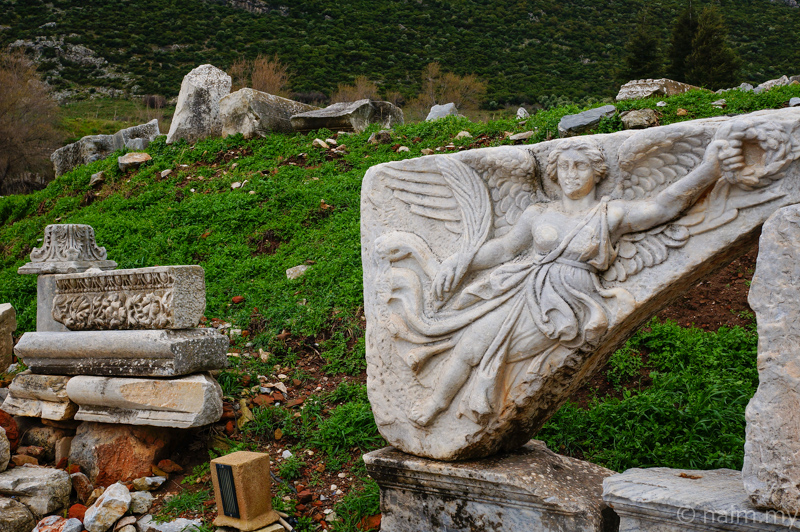 Next to Nike, Monument of Memmius, built during Augustus’s reign in 1st c. AD, to commemorate a Roman commander’s major battle victory in 87 BC. 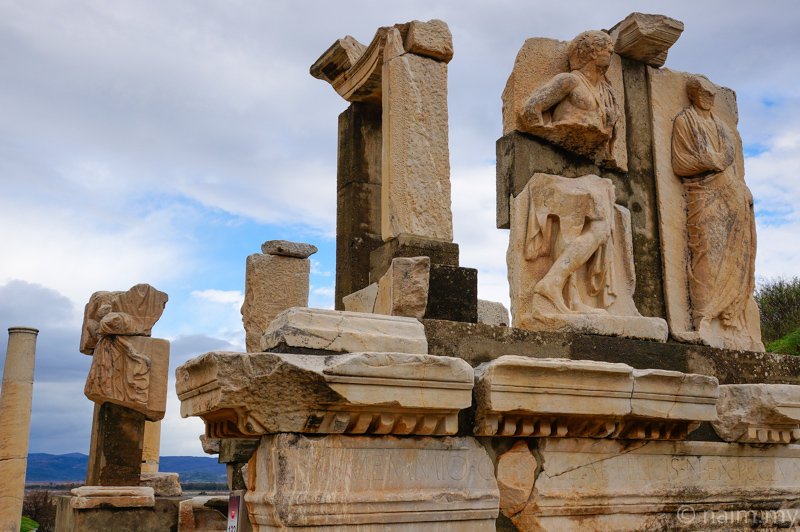 This area is Domitian Square, with Temple of Domitian to the right, and Fountain of Pollio to the left. 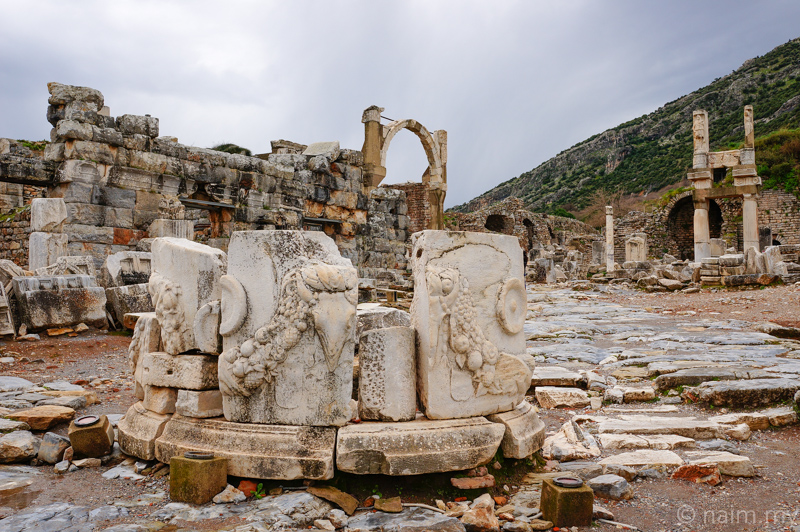 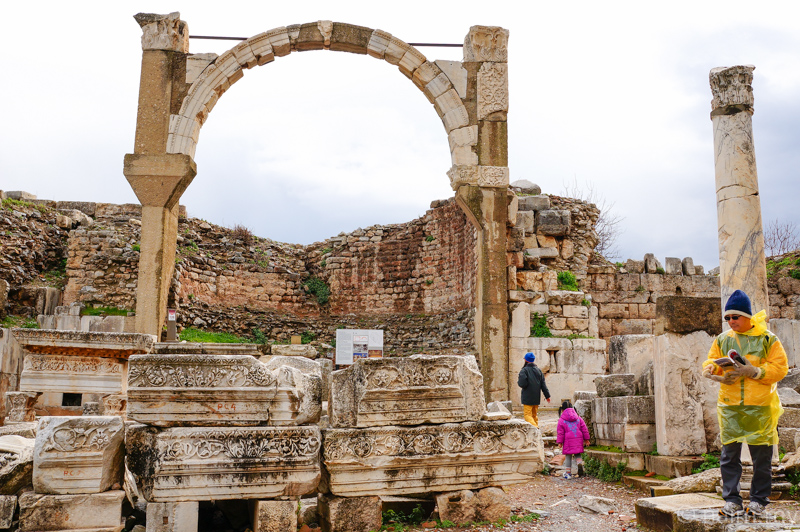 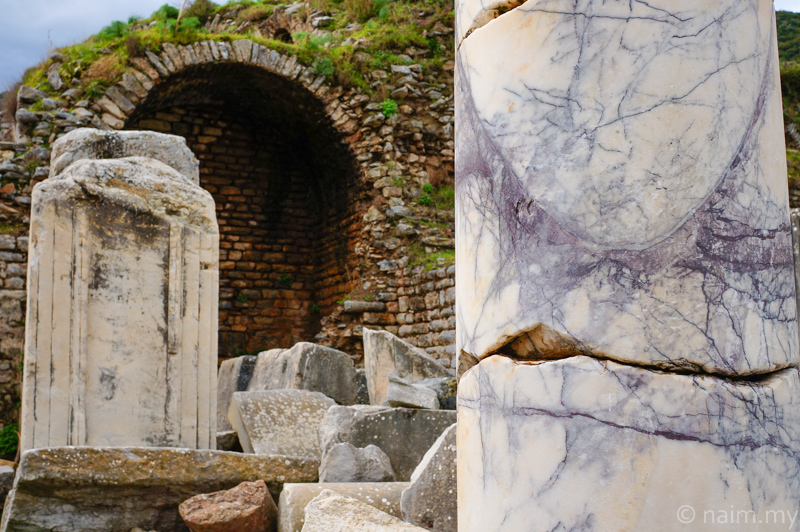 Temple of Domitian, in honour of Emperor Domitian, who ruled 81-96 AD. 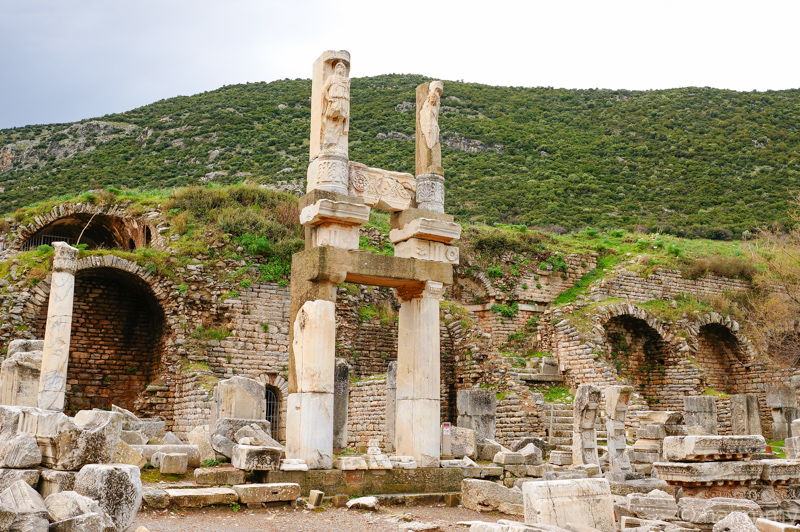 Another view of Domitian Square, full of rubble. Still a lot of work to reconstruct this part of Ephesus. It is said up to now only 15% of the city has been excavated and reconstructed. 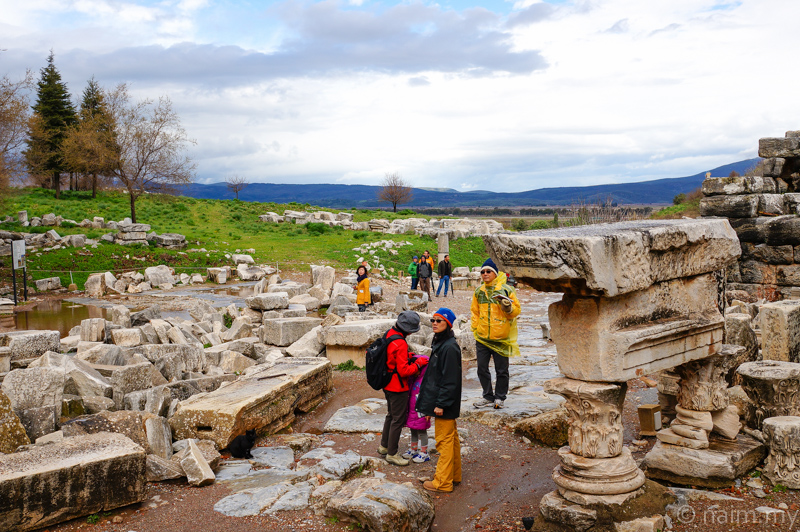 Domitian Square done, we pass by Hercules Gate, which marks the start of Curetes Street. One can see Hercules on the left column — it’s him alright because he’s holding the skin of a fearsome lion. In Greek mythology this lion had been terrorising Nemea, but nobody could kill it due to its thick, tough skin. Hercules pinned it to the ground, and thrusted his arm into the lion’s throat, thus choking it to death. Always my hero, Hercules! 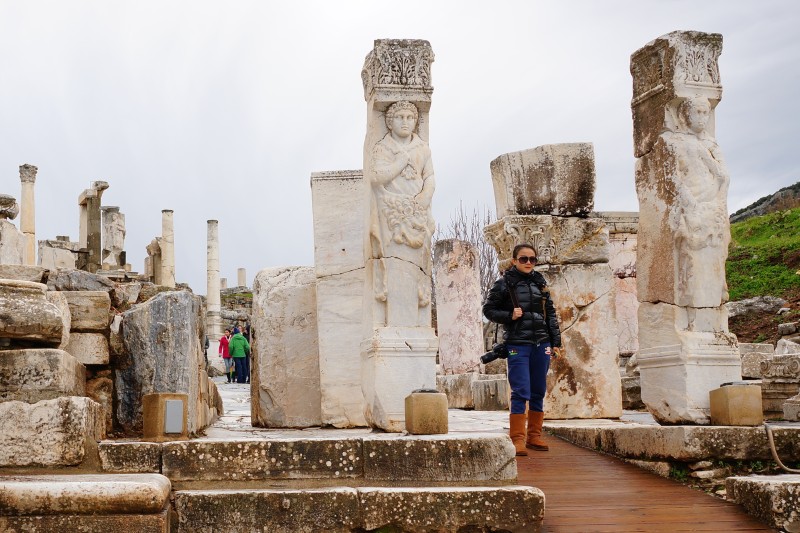 Curetes Street goes all the way downhill, from Hercules Gate to Celsus Library. The marble surface is gouged out to form little holes — to provide grip to the Roman’s footwear on a wet day like today’s. This is one of the three streets of Ephesus, and was lined with shops, temples, monuments, public amenities and houses of rich citizens. 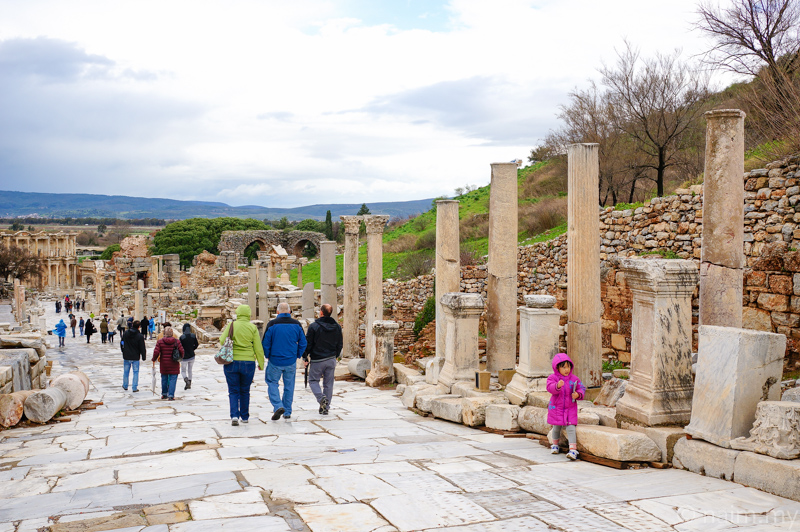 An ancient grafitti, most probably. 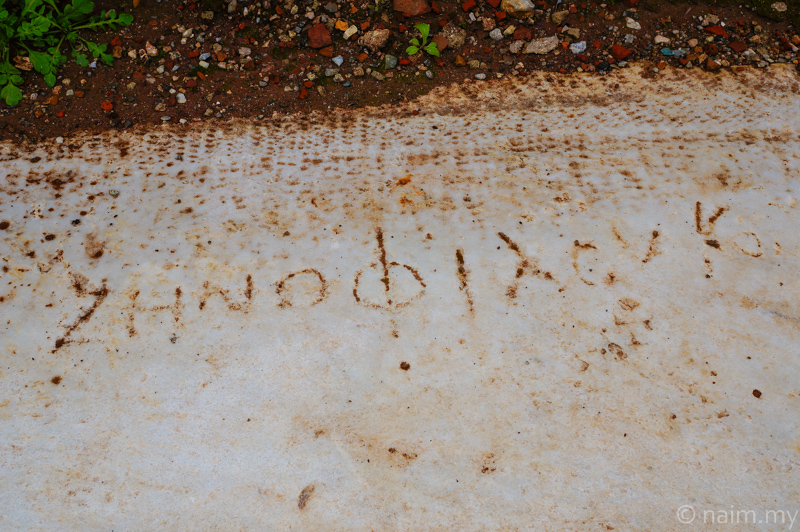 Statues of important leaders line the street. Interesting that whenever any leader was ousted or gone, they lopped off the head, to be replaced by a bust of the new guy — sort of recycling the statue. 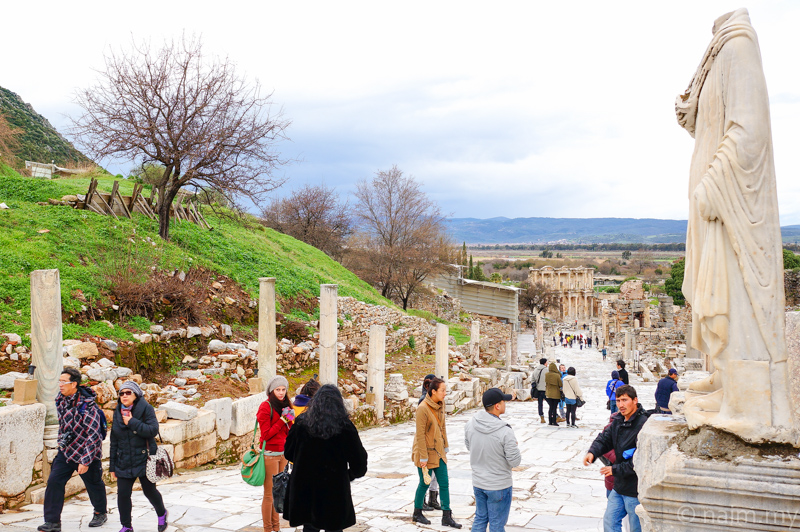 What a grand view it would have been in the old days — these are pillars for covered collonades lining both sides of the open-air Curetes Street. 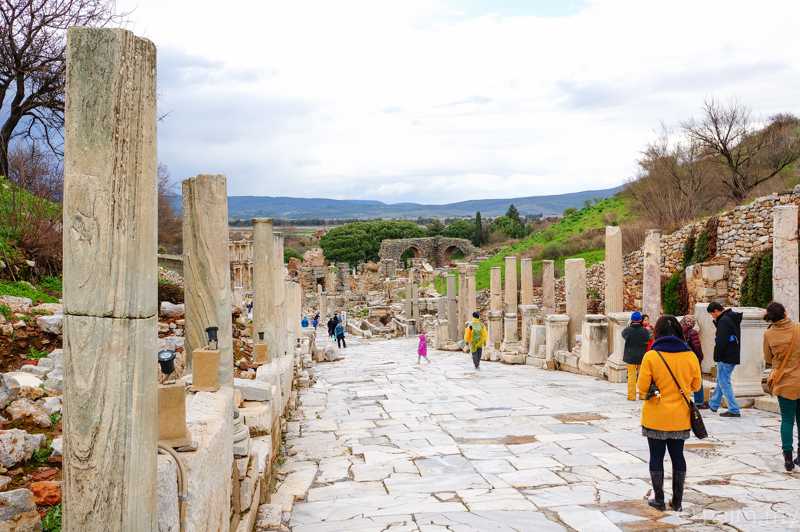