We are now strolling down Curetes Street (16 in the image below), towards the library (4), amphitheatre (2) and exit.

The view of Curetes Street as we walk down to the Library of Celsus. This street was lined with beautiful colonnades, memorials, statues, temples and houses of wealthy citizens. 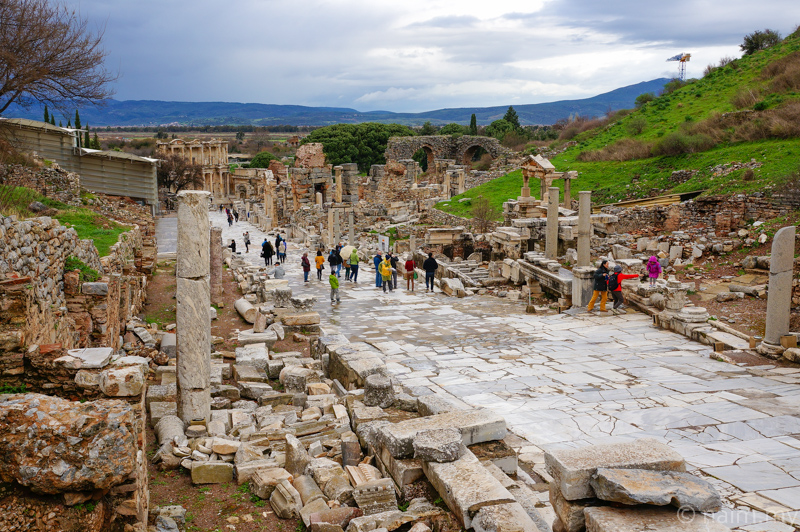 Looks Greek to me! Remnants of tablets, porticos and memorials litter the periphery of Curetes. 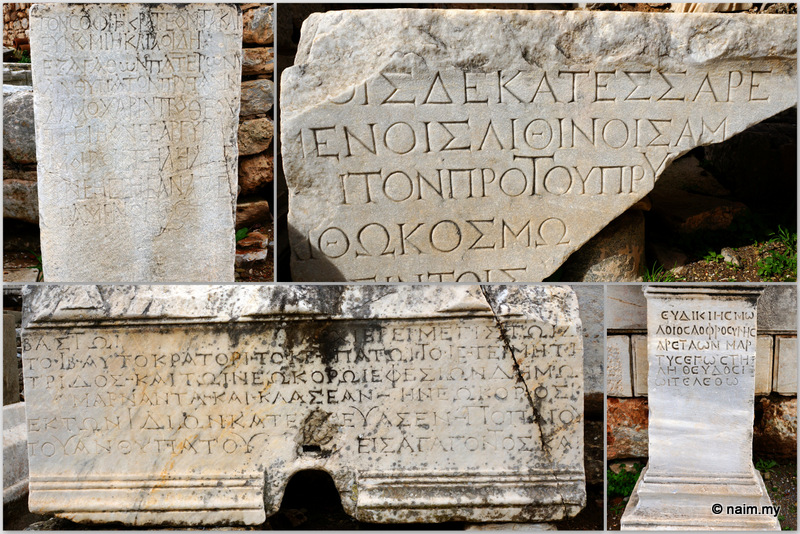 Terrace houses of the rich, from before Christ time … with beautiful mosaic walkway right outside their gates. 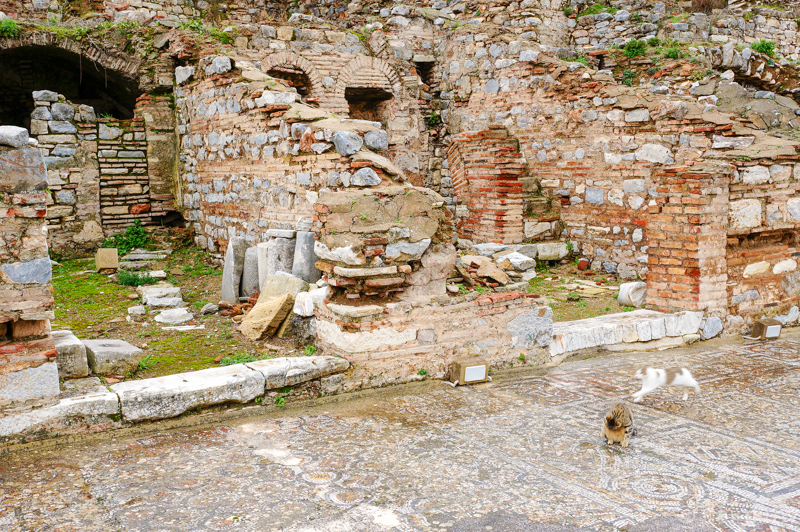 I am admiring this elaborate walk-path mosaic art, when suddenly Cats of Ephesus appear from behind pillars and rocks, and start walking towards me while meowing. Sorry guys, too many for tummy rubs. 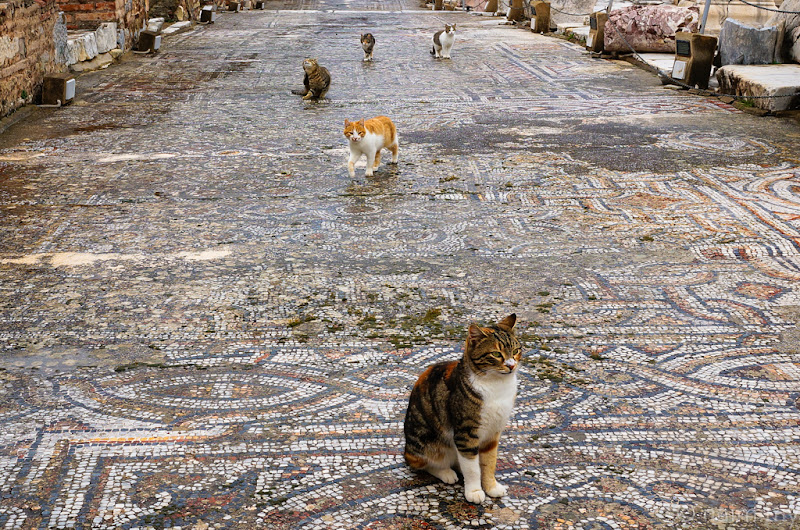 The various patterns of the 2,000-year-old mosaics in front of the rich people’s houses. 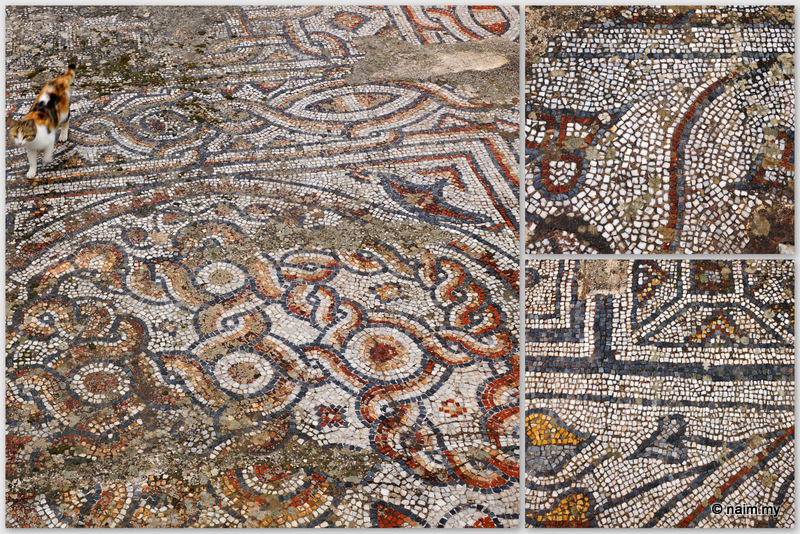 Fountain of Trajan, an elaborate monument built in 104 AD for Emperor Trajan. Still under restoration. This would be a popular spot — the Brothels, from 1st c. AD. It has two floors — downstairs for entrances, reception, waiting area and cleansing facility, upstairs for the private rooms. A statue of Priapus — Greek and Roman god for fertility and male virility — with an oversized phallus was unearthed here. How apt. 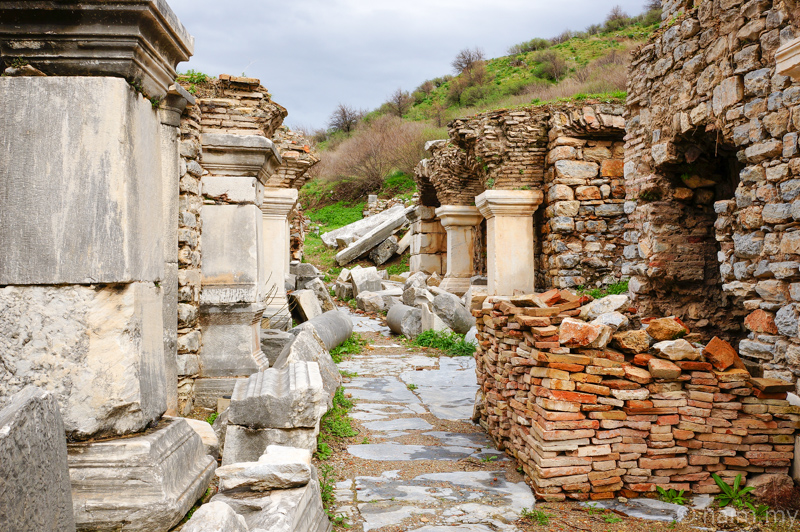 Interestingly the public latrines are located between the brothels and Curetes Street, so relieve yourself first before sex, right? Sitting toilets, a Roman invention perhaps, and communal as well. I am sure they had comfy toilet seats too, but looks a bit cramped as I try sitting on one of them. From 1st c. AD. 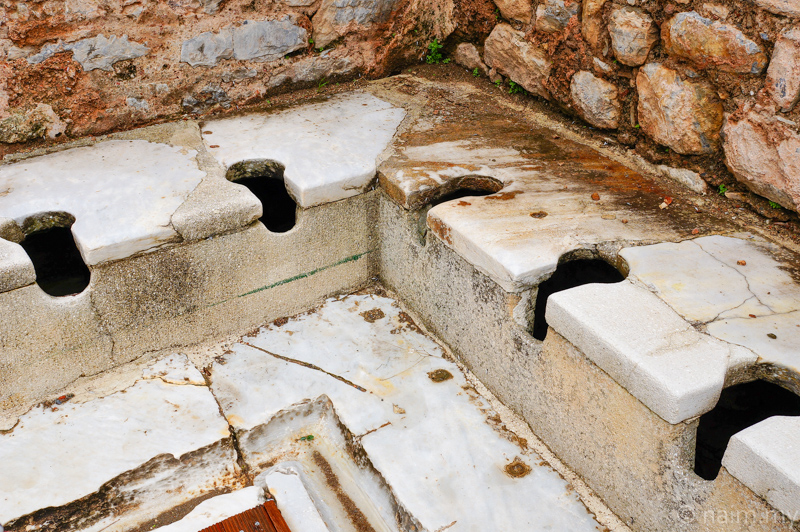 From the latrines, one can have a great view of the library, but I guess in the old days, you can’t see anything because there’d be walls and buildings everywhere. 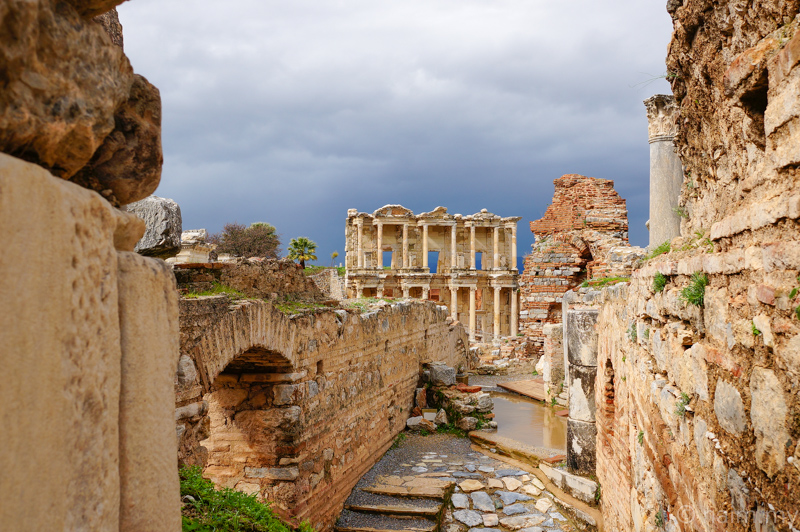 The majestic Temple of Hadrian, one of the best-preserved structures in Ephesus. Built 138 AD, in honour of Hadrian’s visit in 128 AD. It has Corinthian columns and an image of Medusa, which is intriguing. 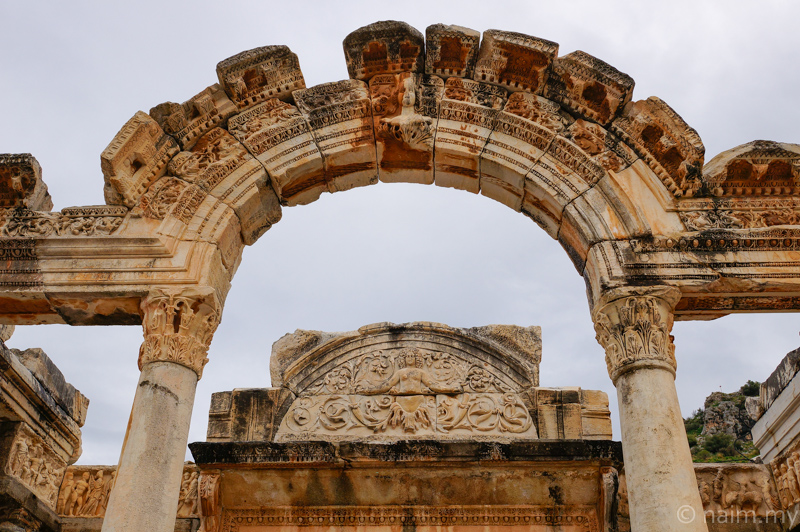 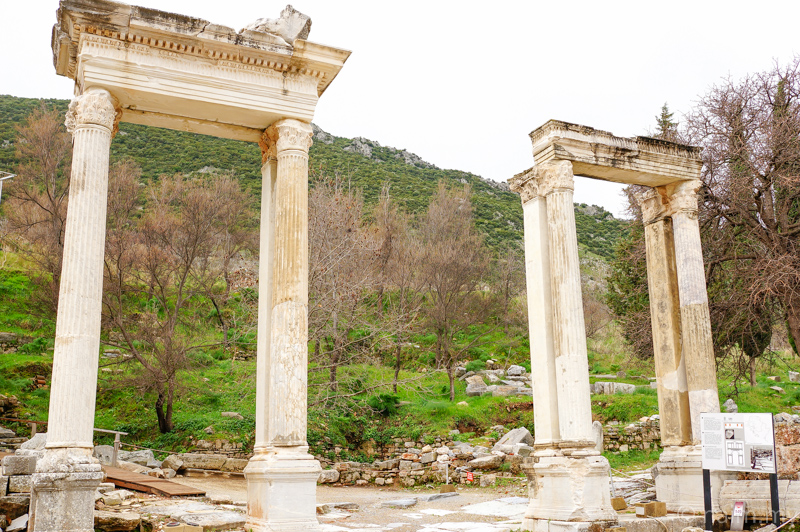 At the end of Curetes Street, the famous 2-storey Library of Celsus, built early 2nd c. AD, for Celsus the governor of Roman Asia (Ephesus was the capital). This was one of the great ancient libraries with more than 12,000 scrolls, behind Alexandra and Pergamum. 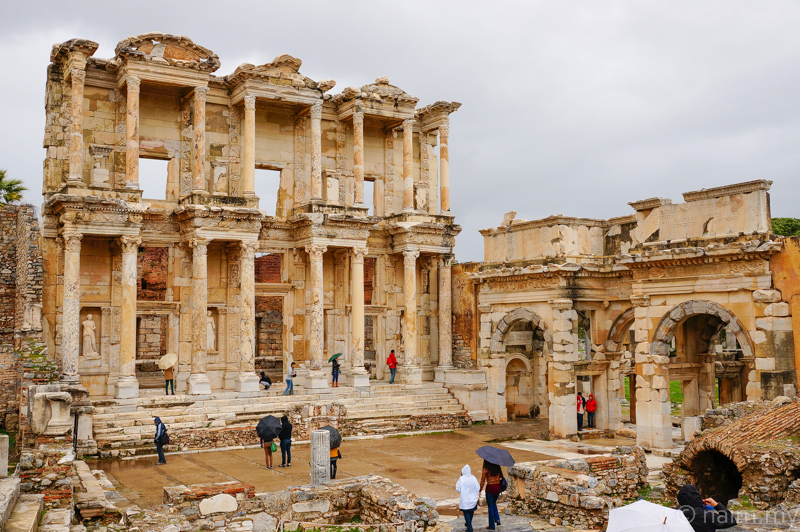 The entrance to the library is adorned with four statues at the top of the stairs, representing Wisdom (Sophia), Knowledge (Episteme), Intelligence (Ennoia) and Valor (Arete). Photo below shows Sophia, Arete and Episteme. 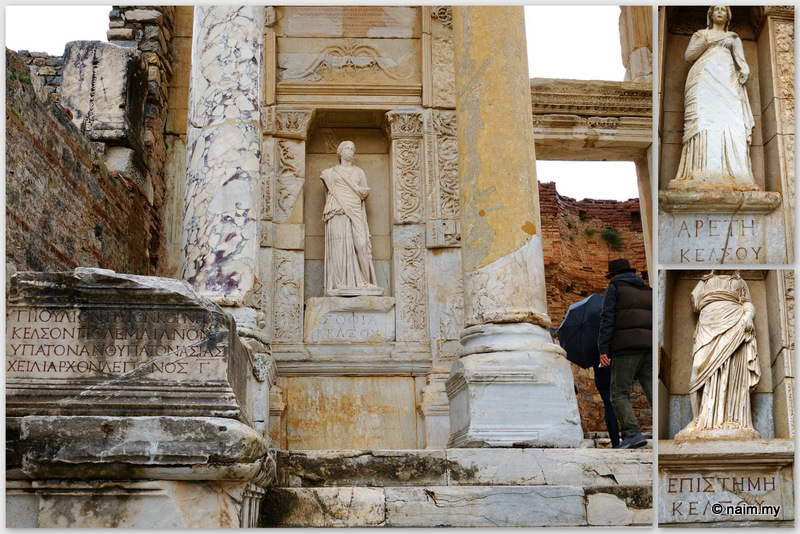 The Gate of Mazeus to the right of the library is richly decorated, with inscriptions praising Emperor Augustus. A great place to stay dry on a rainy day like today’s. 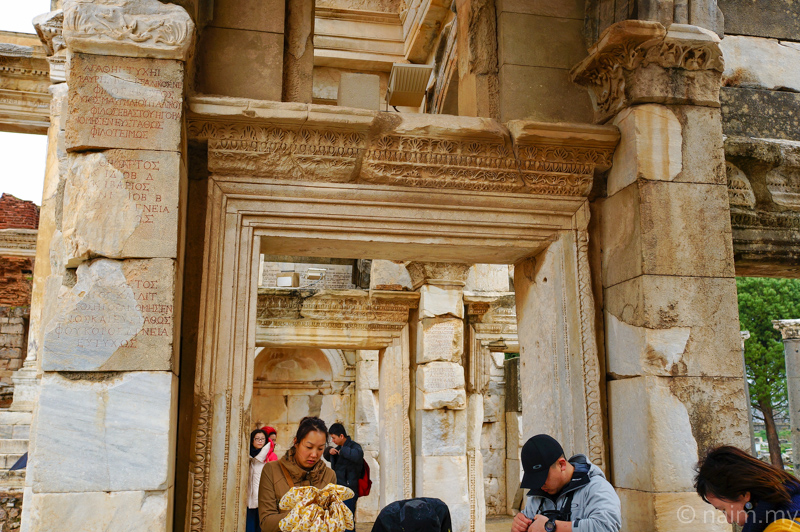 Ephesus’s Library of Celcus was the third richest after Alexandra and Pergamum. In the 3rd c. it was burnt by the attacking Goths although another theory says it was burnt during an earthquake. 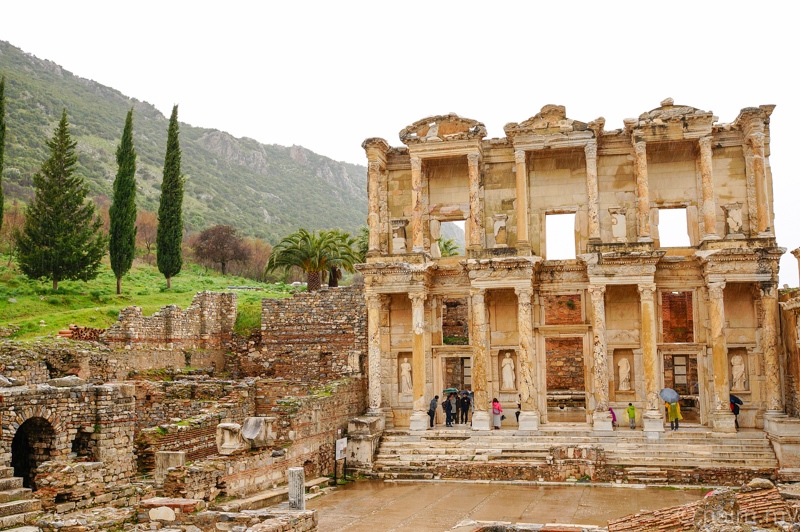 Past the library we turn into Marble Street, from 1st c. AD. The facade of the library can be seen and in the foregound, the site of the commercial agora (market square). The harbour is just to the right of here, so shipped goods can be easily brought to this agora. 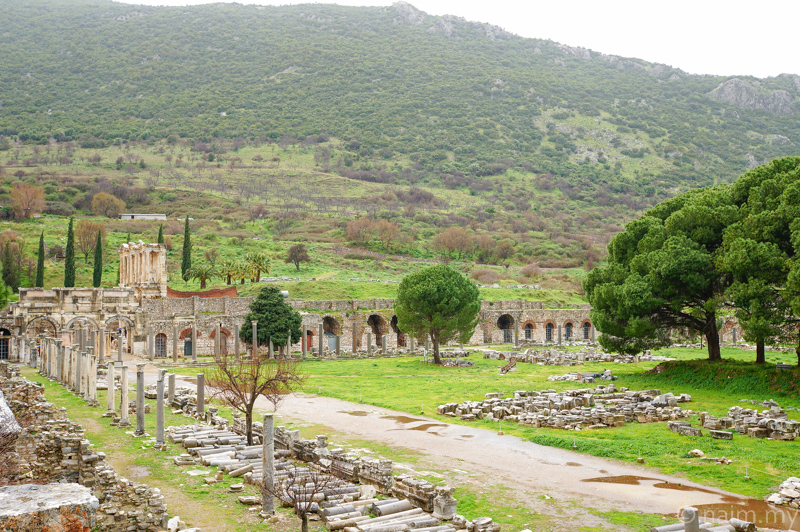 Also along Marble Street, the Great Theatre stands as the most magnificent structure in Ephesus. Built by the Greeks in the 3rd c. BC, it was enlarged by the Romans. It could hold 25,000 people, and since Roman standards dictated that any city’s theatre should accommodate 10% of the population, we can assume 250,000 people lived in Ephesus at that time. A site for gruesome gladiatorial combats and animal fights, among others. At the entrance of the Great Theatre, I look down Harbour Street. There used to be a harbour at the end of this road, but siltation had shifted the Aegean coastline some 5km away. Ephesus gained importance due to this key ancient harbour, which was also the end-point of the Silk Road from China. 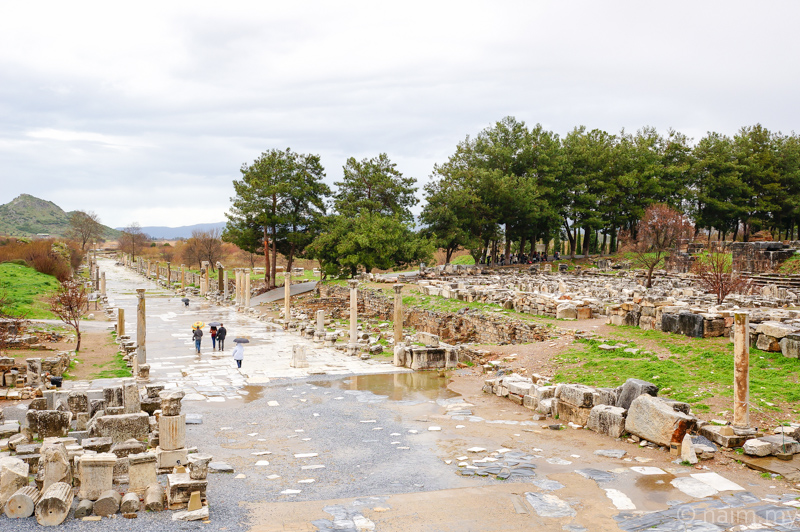 Walking along Harbour Street towards the ‘harbour’ I look back at the Great Theatre. What a grand sight it must have been to a visitor who sailed into Ephesus, and was walking up the road to downtown Ephesus on the right. 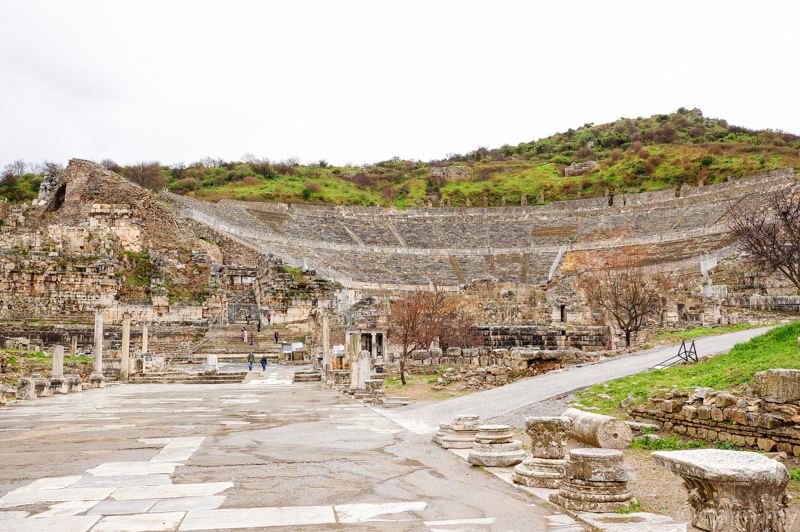 I take the turn for exit and I spot some sarcophagi. There must be a necropolis nearby, maybe not as grand as Hierapolis’s. 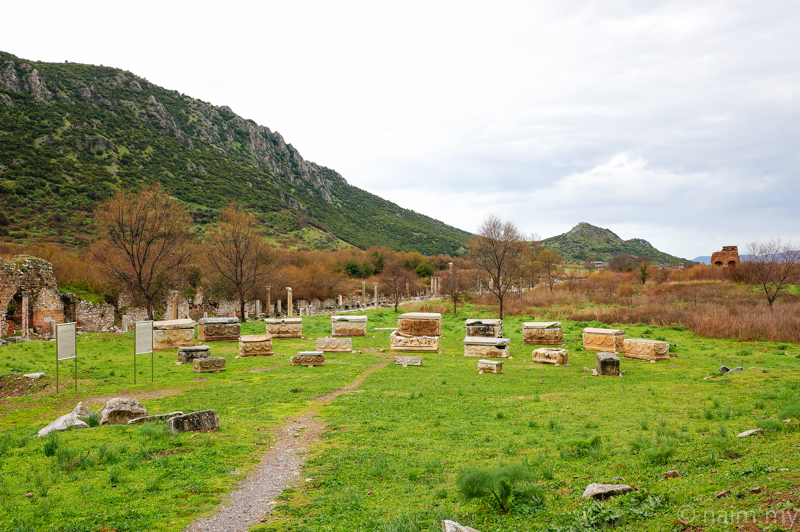 There’s also a collection of Roman milestones nearby — real milestones fixed along roads to indicate distances from, say, Constantinople or Ephesus. 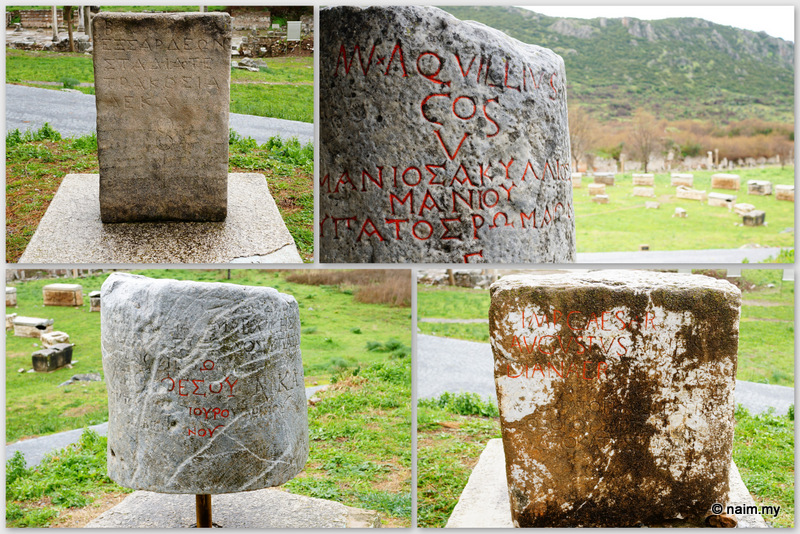 Out of Ephesus City, and the usual stuff. 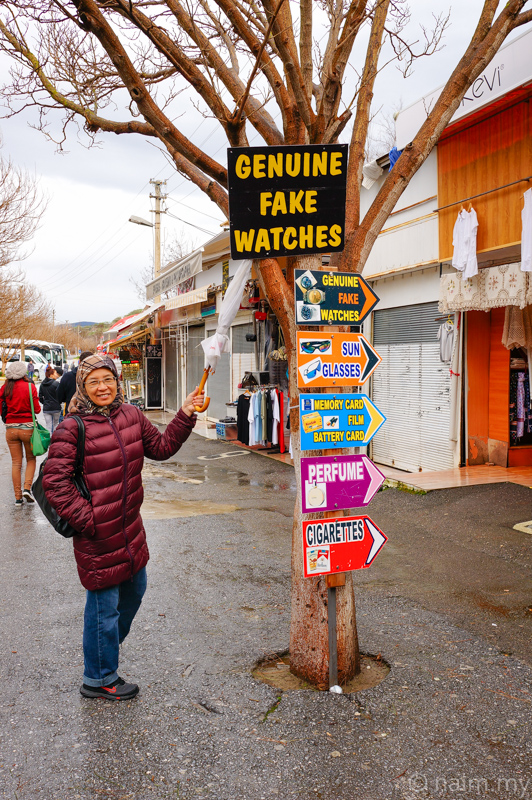 Distinctive yellow cabs are standard in Turkey — the cars in good conditions, the drivers okay but could be daring, the fares reasonable. 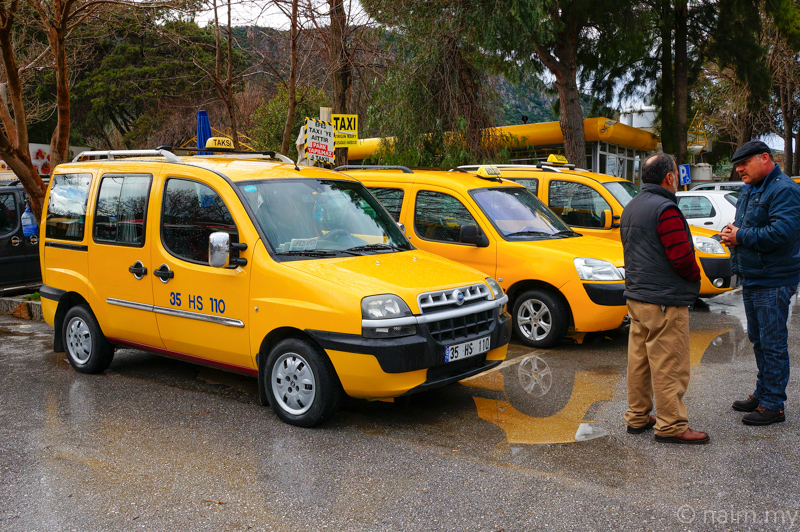 We leave Ephesus’s access road, and something strikes me — The Seven Sleepers? So this place is also where the cave of the Seven Sleepers is, as told in the Qur’an (Surah Al-Kahfi – “The Cave” – verses 18:07 to 18:26), and related by Christian and Jewish sources. Apparently the story says that when the sleepers woke up they went to Ephesus to buy food. Unfortunately the cave is not in our itineray so we have to give it a miss, heavy-heartedly. 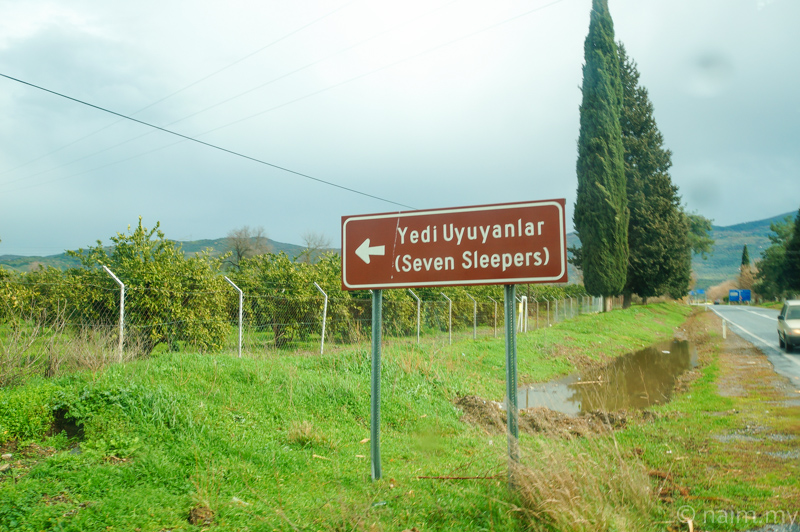 We eagerly look forward to lunch, esp. after spending the whole morning walking around Ephesus, sometimes in the cold rain. 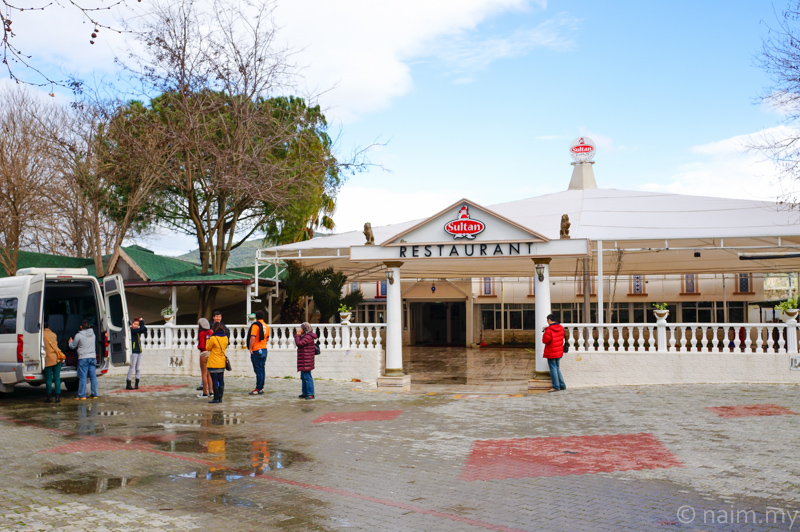 Mehmet explains the menu, but we are still somewhat clueless. 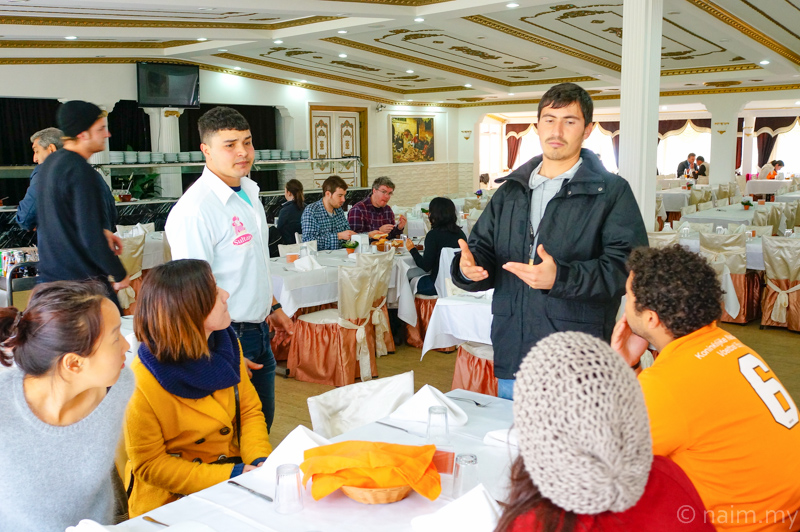 From the restaurant’s window, very nice pasture and the town of Selcuk. 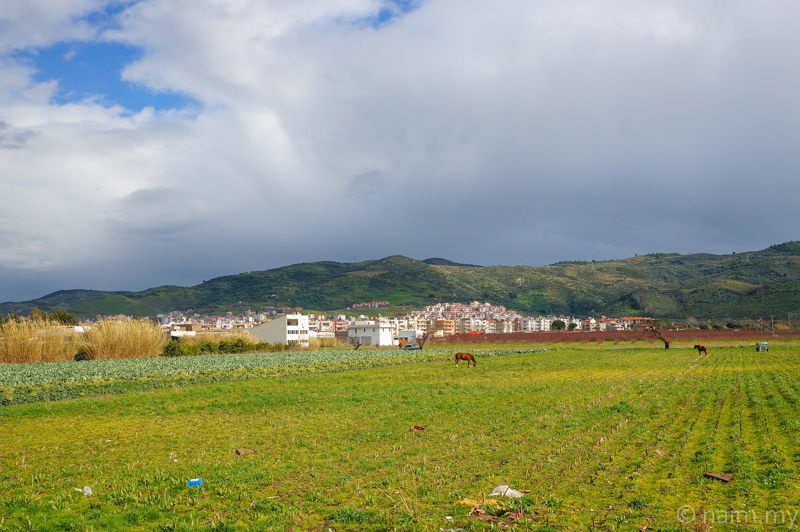 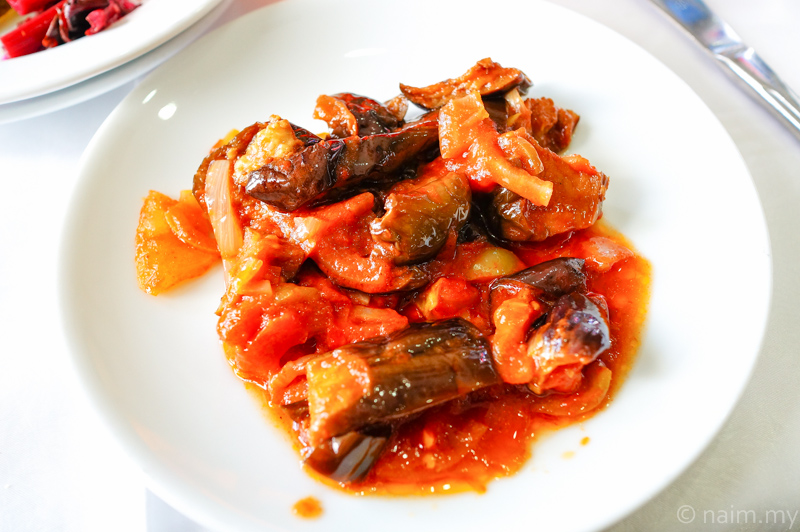 … and chicken kebab. Tasty and filling. 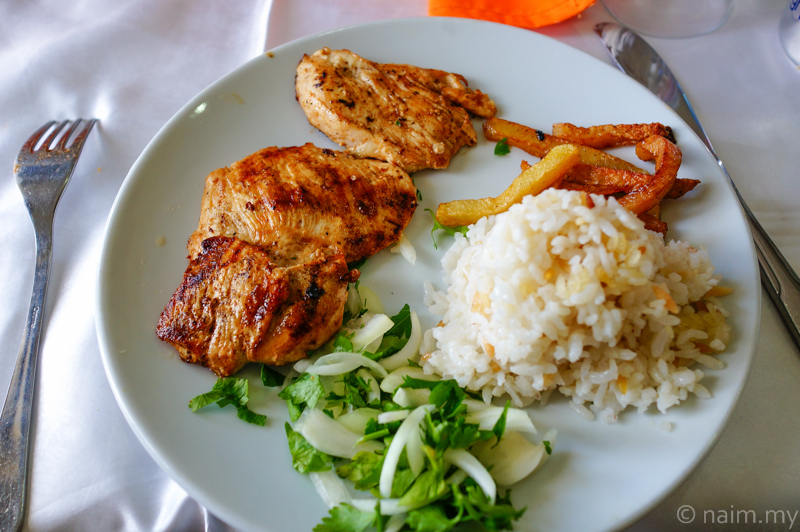 Returning to our van for the rest of the day’s programme, and I just hope the weather would hold. 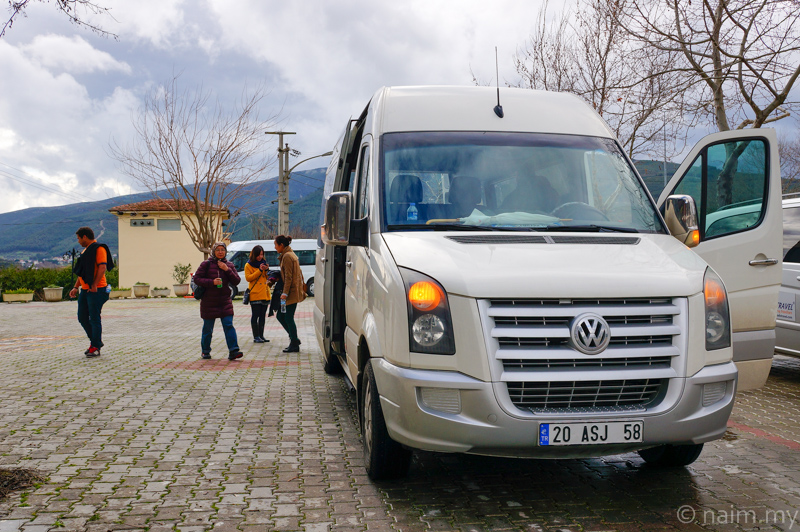