Ephesus has a significant place in Christianity. According to traditions, when Jesus was at the stake, he placed his mother in John’s care (see Gospel of St John, Chapter 19, verses 26-27). So when Jesus died, John took Mary away from Jerusalem to the safety of a wooded hill overlooking Ephesus, some 1,000km away as the crow flies. 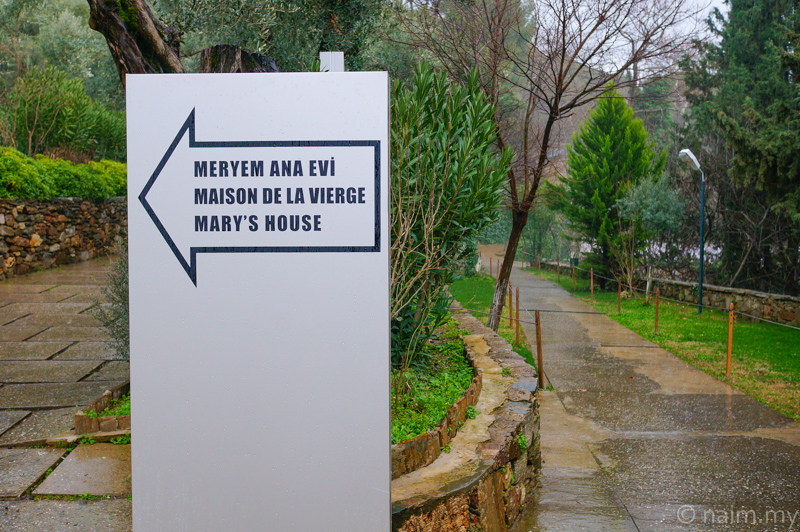 It’s now a shrine, a place of worship as declared in late 19th c., and Pope Paul VI visited it in the 60s. In the 80s, Pope John Paul II came and declared this Shrine of Virgin Mary a place of pilgrimage. And Muslims visit it too, since Maryam is the mother of Isa, a major prophet. 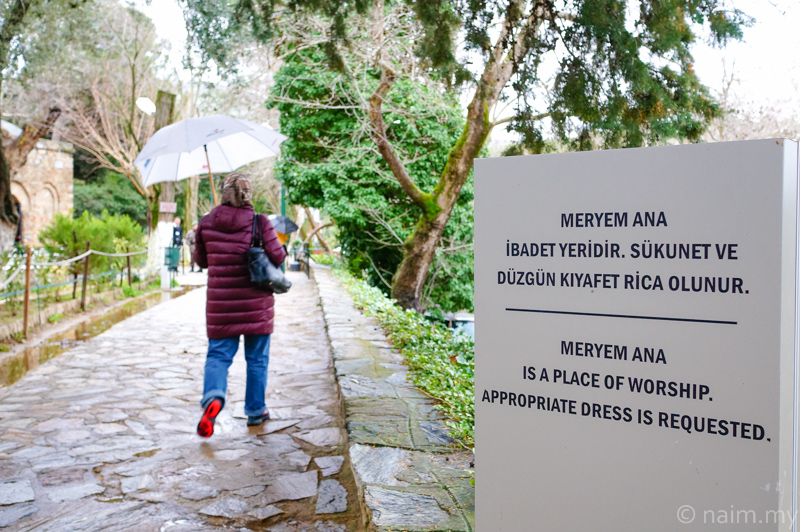 It’s a delightful wooded area Mary’s House is in, atop a hill 420m high, several km away from the entrance to Ephesus City. I suppose the Romans in Ephesus at that time were unaware that Mary was living in the forest atop a hill overlooking the harbour. Either that or they couldn’t be bothered about what’s happening in faraway Jerusalem. 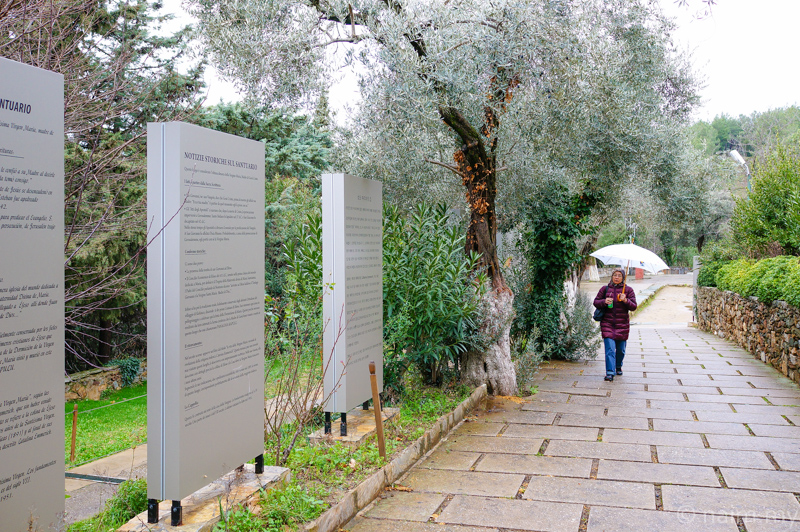 Multilingual plaques with notes arguing the authenticity of this site are placed along the access path — this is the English version. 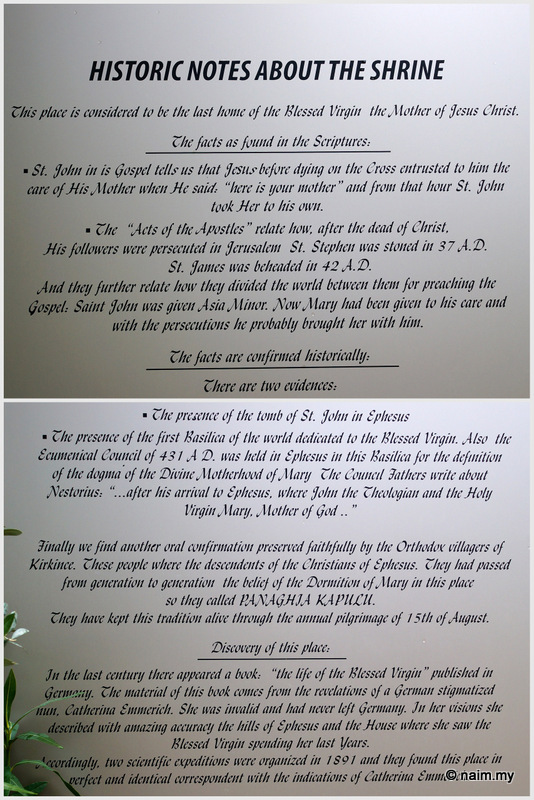 As we near the house itself, a statue of Mary welcomes us. It’s drizzling, so we hurriedly move forward. 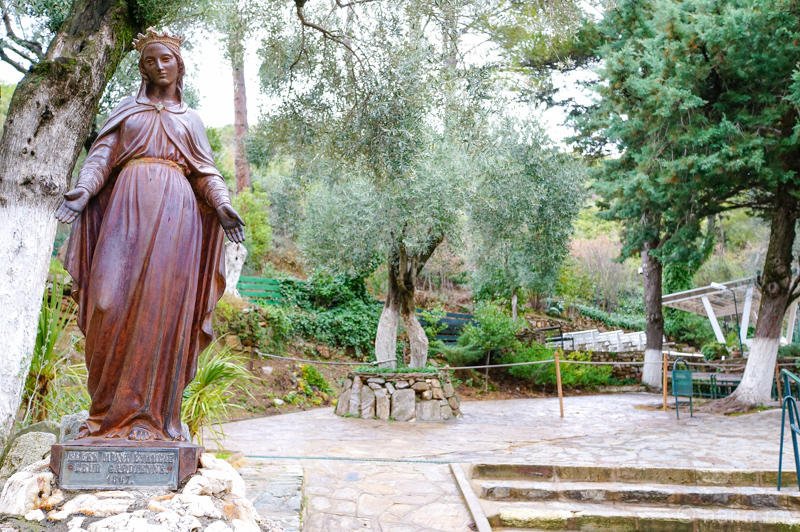 This is the sacred site. Sure it’s reconstructed, but the lower part of the building is believed to be the original 1st c. construction. 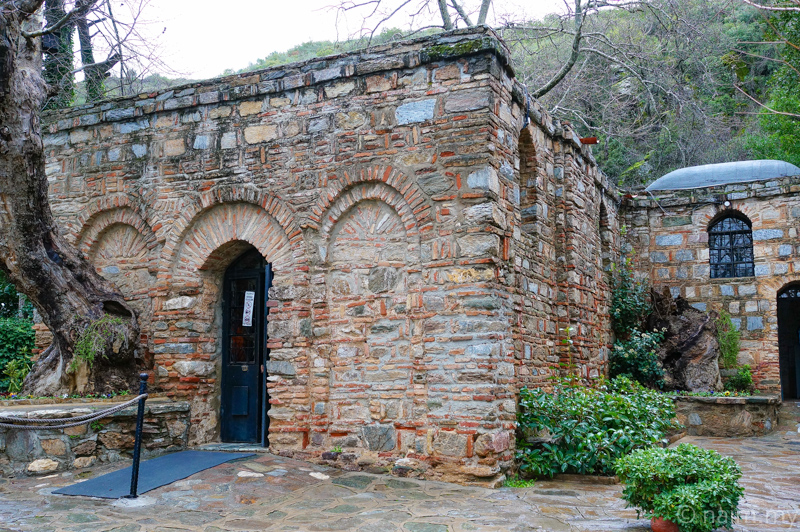 The main part of the building to the left is more like a chapel now, with an altar. The room to the right was most likely the site of Mary’s bedroom. 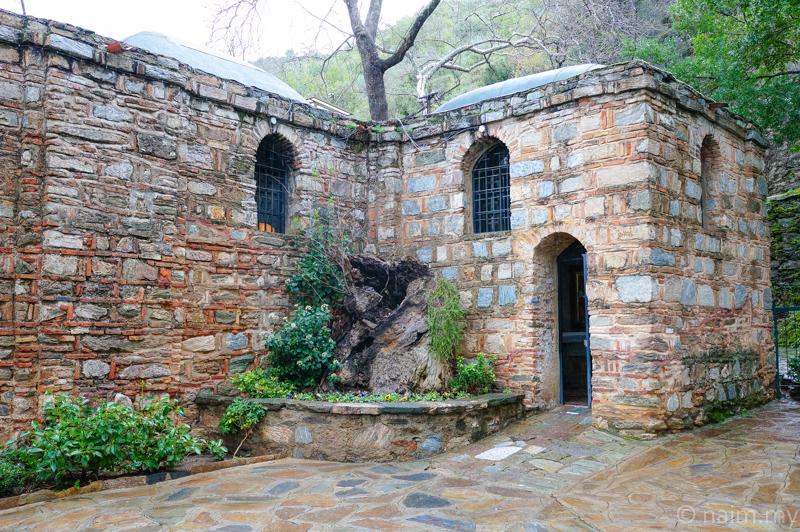 No photography is allowed inside Mary’s House, so we have to make do with exterior shots. The lowest part of the wall here is believed to be from the original house built in the 1st c. AD. 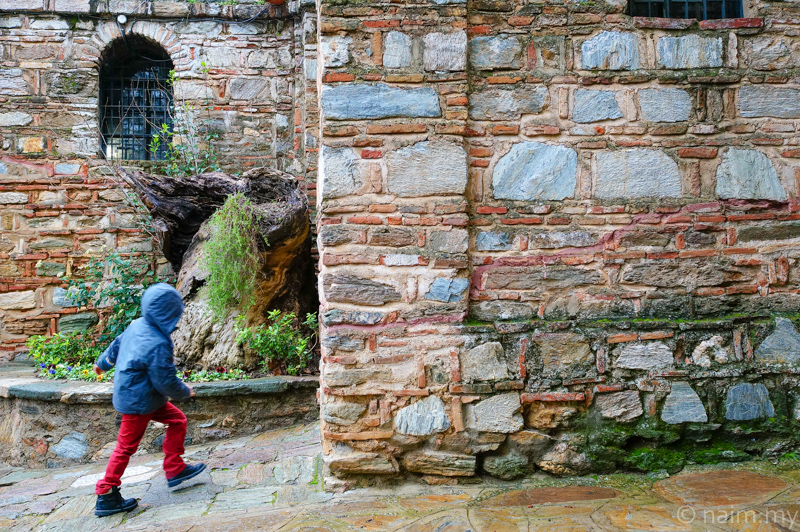 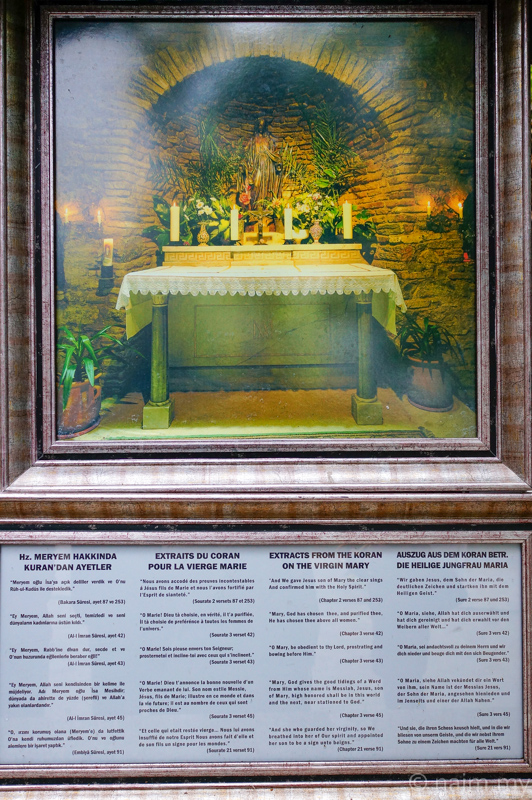 Below the poster, extracts from the Qur’an on Maryam ‘alaihis-salaam (upon her be peace). 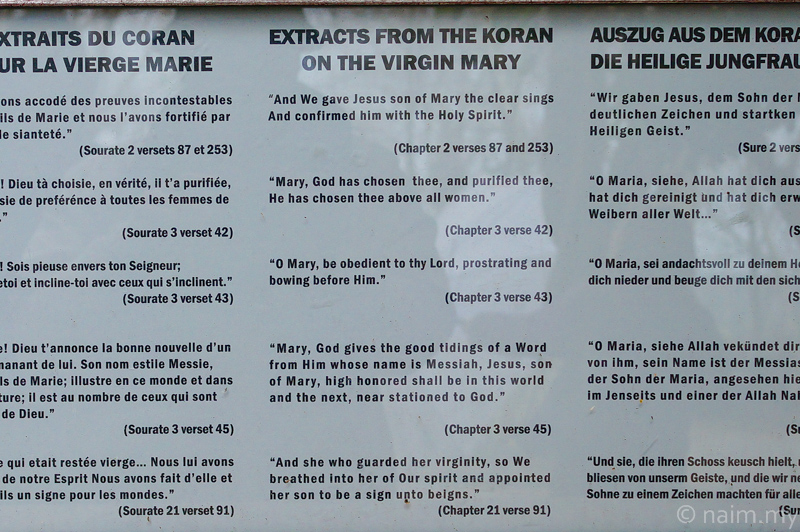 We have to leave and as we walk along the wall of the house’s compound, it is full of prayer tags made of clothes. There’s still argument as to whether Mary was really here or not. Her tomb is nowhere to be found, and some say she ascended into heaven the way Isa (Jesus) did. In any case, to me it is simple: if you firmly believe that this is really Mary’s House, then it is indeed Mary’s House.  That’s what faith is all about. So what do I think after this visit? Well, my faith is a private matter. 😉 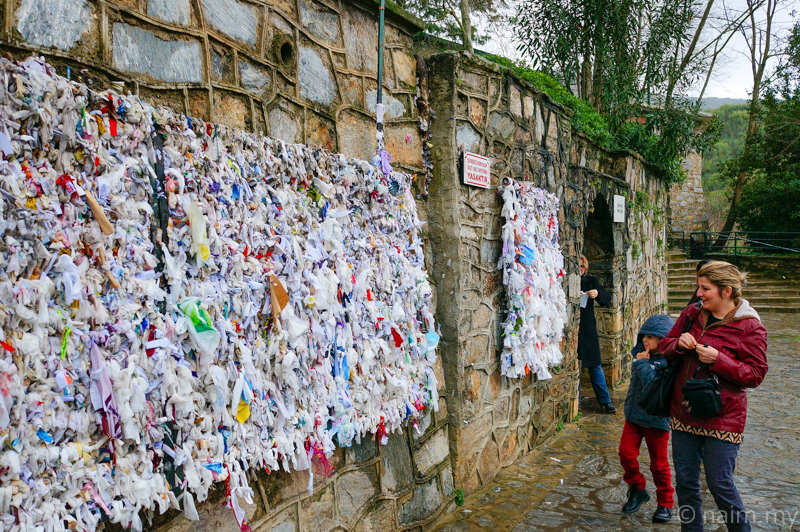 We return to the valley and drive past Ephesus to go to a hill in Selcuk where St John’s Basilica is located. A basilica is basically a large and important church, and Emperor Justinian built this one in the 6th century atop what was believed to be John’s tomb. Remember, John brought Mary here, to safety from Jerusalem. 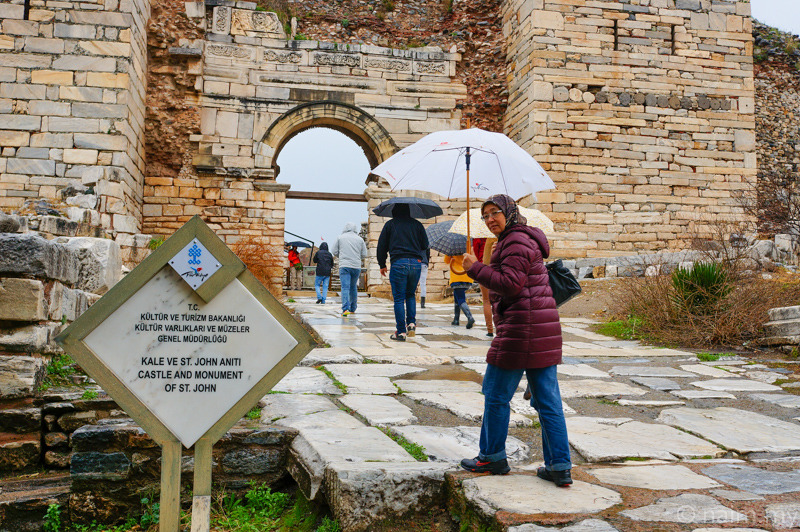 What remains of the basilica are pillars and stones of the walls. With the decline of Ephesus as a harbour, the basilica lost its importance and was converted into a mosque by the conquering Seljuks in the 14th c. Soon after, a major earthquake made the building unuseable. In the background atop the hill, one can see the 14th c. Seljuk Fortress. 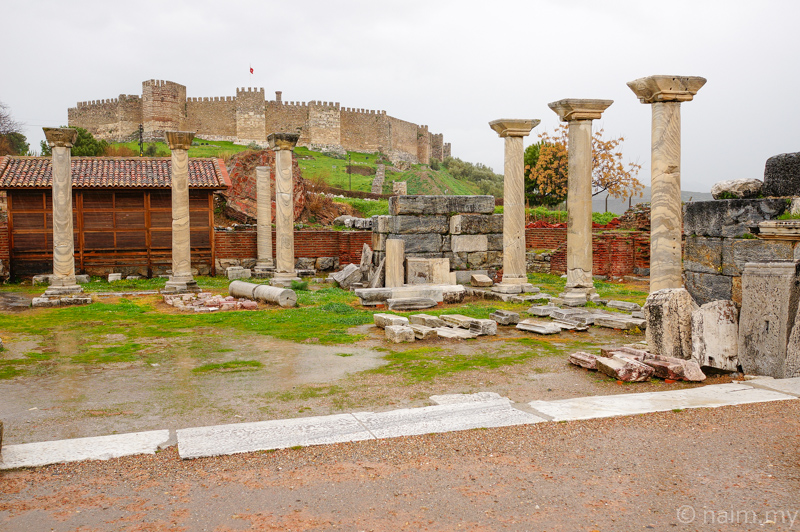 I am facing west, looking at the central aisle of the basilica, whose building is shaped like a cross — the cruciform. I am standing at the ‘crossing’, the junction where the four arms of a cross meet. 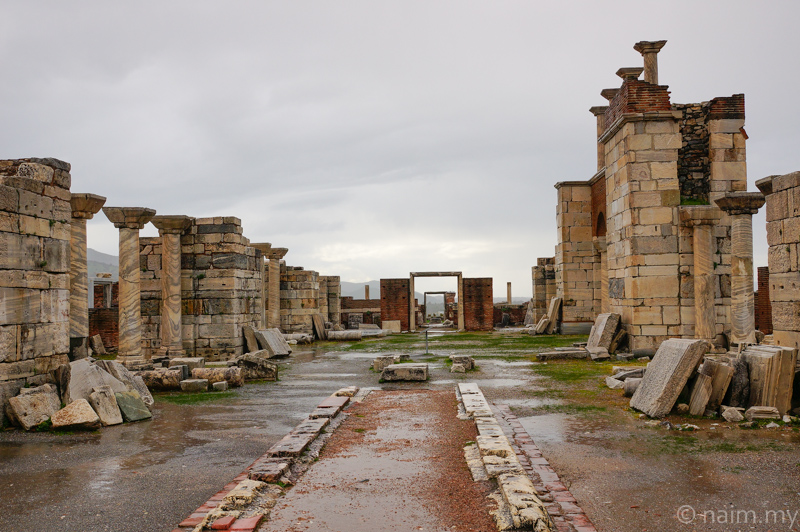 Behind me, facing east, is the altar. 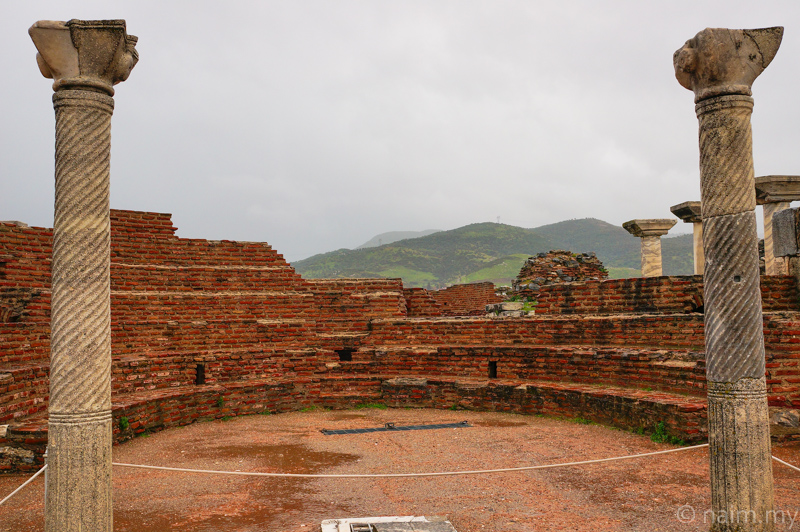 And just before the altar, encased in marble is St John’s tomb, but his body is missing — nobody knows where it is, just like Mary’s. 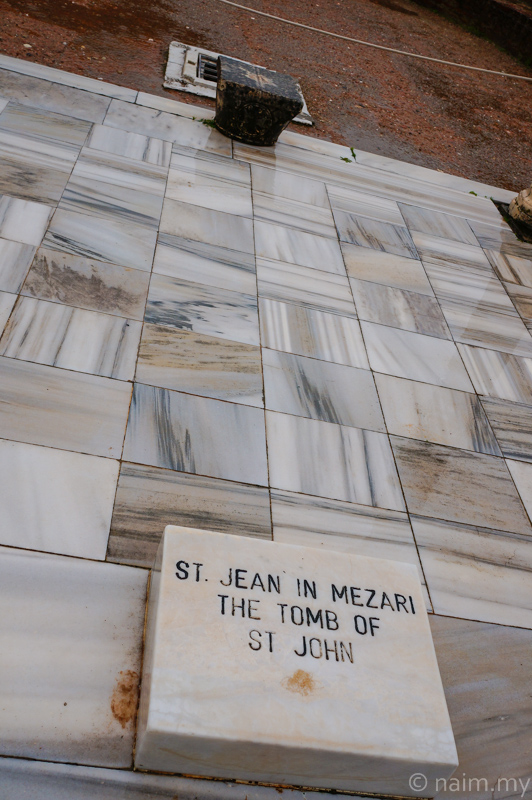 Just outside the basilica’s compound, down the hill, is a very old mosque. Built in the 14th c., Isa Bey Mosque is a very significant mosque of that Seljuk era. 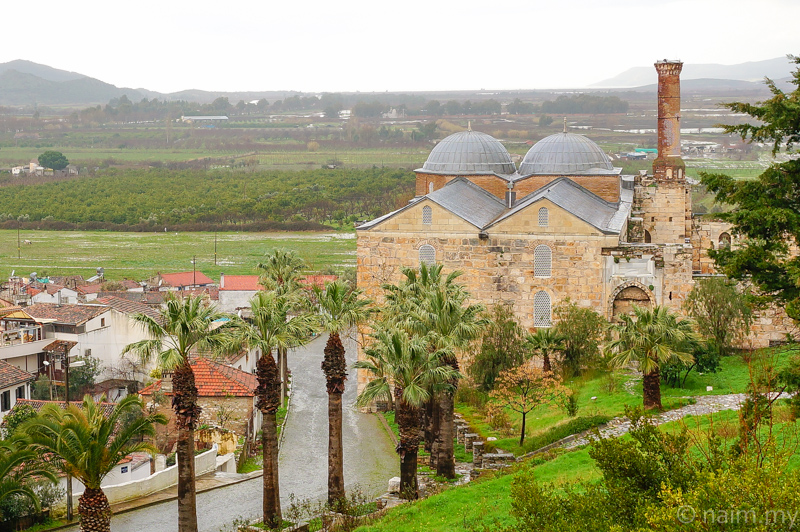 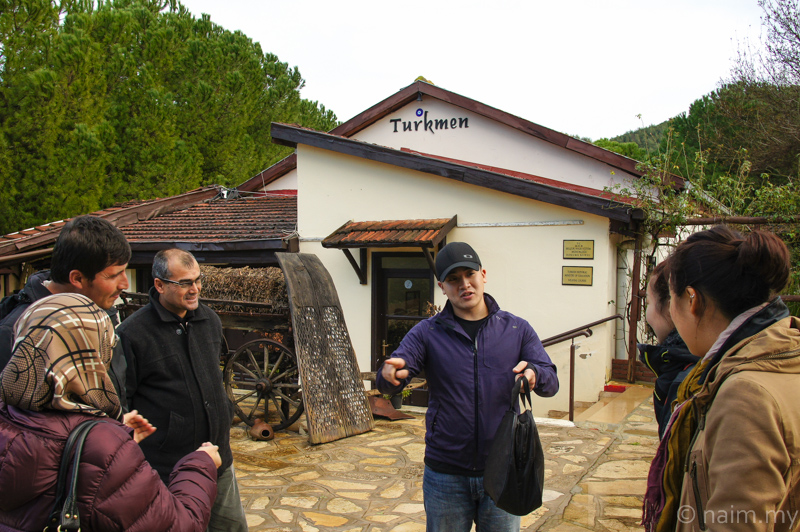 As usual it starts with the pure silk  from worms they breed themselves. We have seen this countless times from our visits to other countries, but since Turkish carpets are so well-known, we drag ourselves through the presentation. 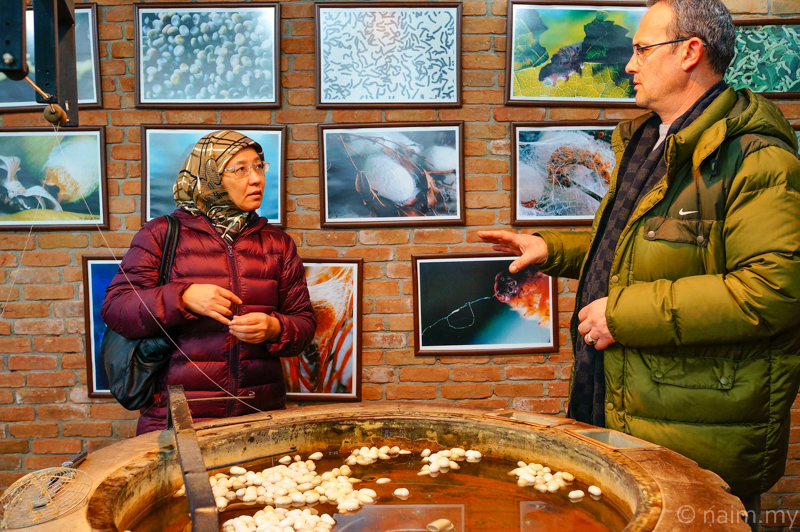 Weaving area — they talk about single knots, double knots, whatever, but carpet weaving is a very slow and tedious process, only for the foolhardy. 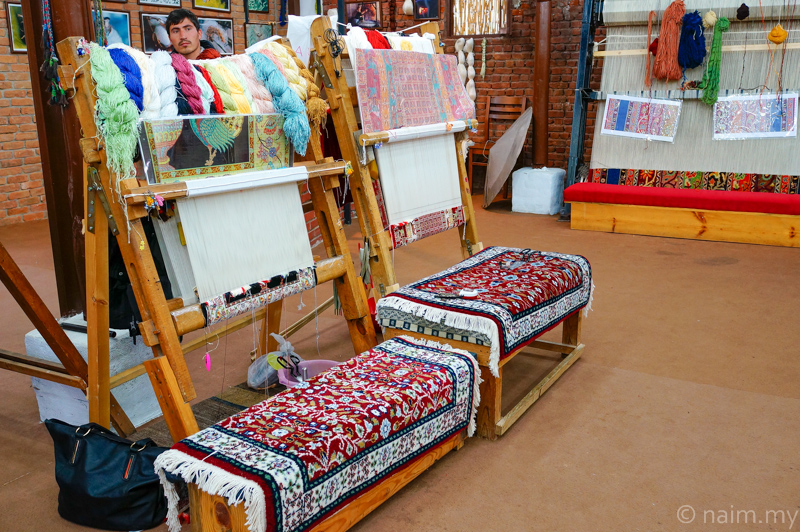 In video we talk about standard definition (SD) and high definition (HD) — the same things happen in carpet-weaving. HD ones take much longer and cost much, much more than SD ones — many thousands of USD it could fetch. 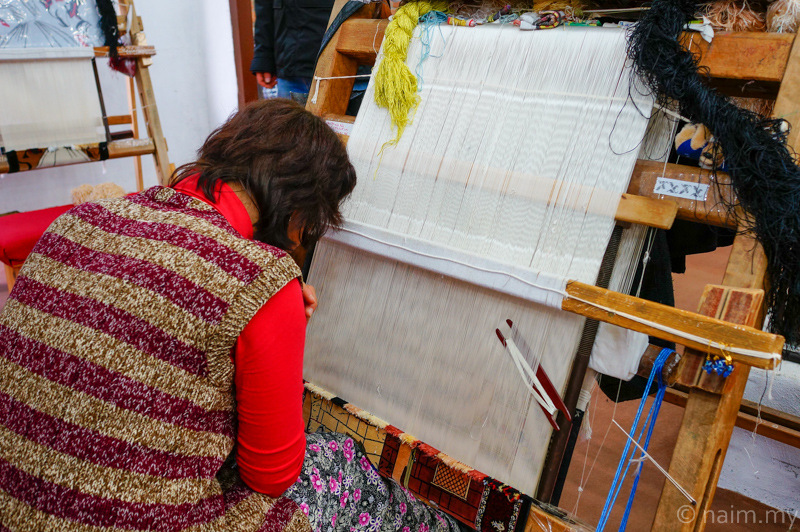 Ah well, posing with Mehmet and Muhammet for posterity. Mehmet has been a great guide, knowledgeable, friendly and funny too. Muhammet is a good driver as well, better than most Turks on the road. And no, we haven’t bought any carpet — I tell them, show me a flying one and I’d probably bite! 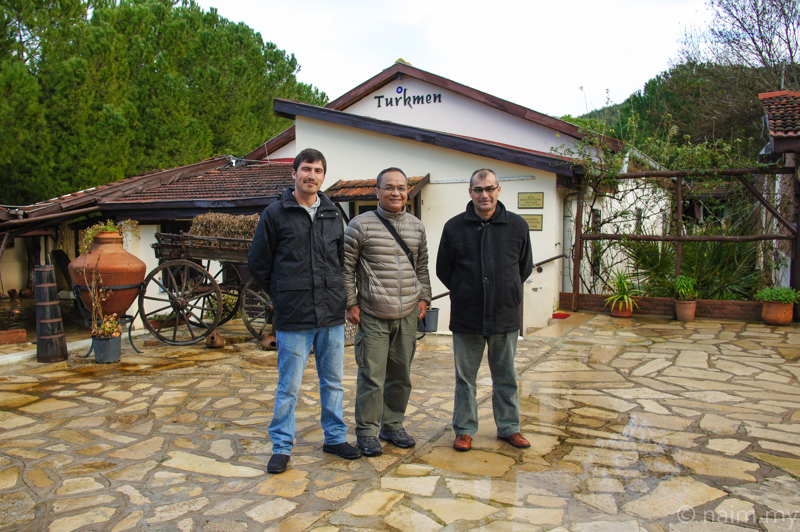 We drop off some people at the Aegean seaside resort of Kusadasi. This is a famous place for summer holiday-makers. 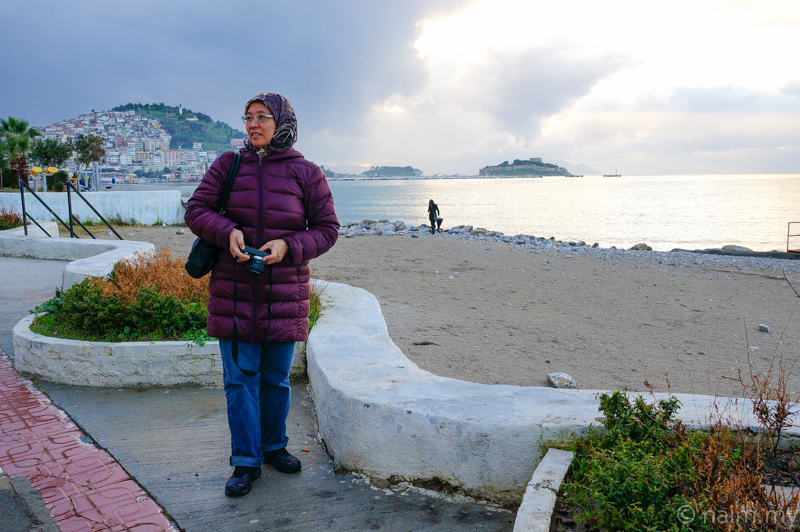 It’s quite a modern and picturesque place. Very nice and pleasant. 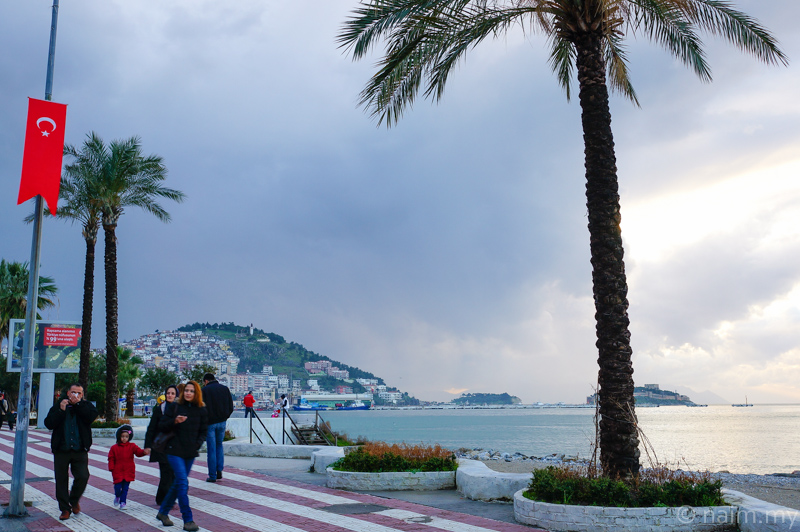 Not to mention romantic as well. 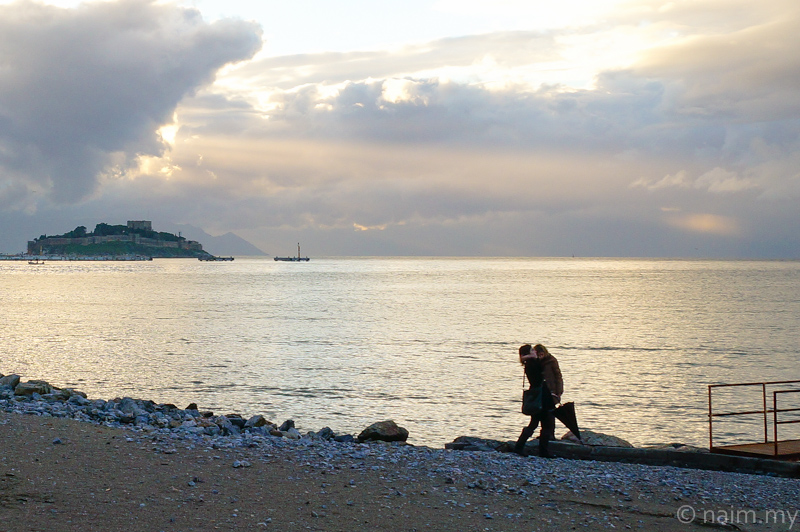 We take the scenic coastal road to return to Izmir airport where our hotel is — early tomorrow morning we are flying to Kayseri (in Cappadocia) via Istanbul. As the sun sets over the Aegean Sea, we say good-bye to this fantastic part of historic Turkey, and to Mehmet and Muhammet. 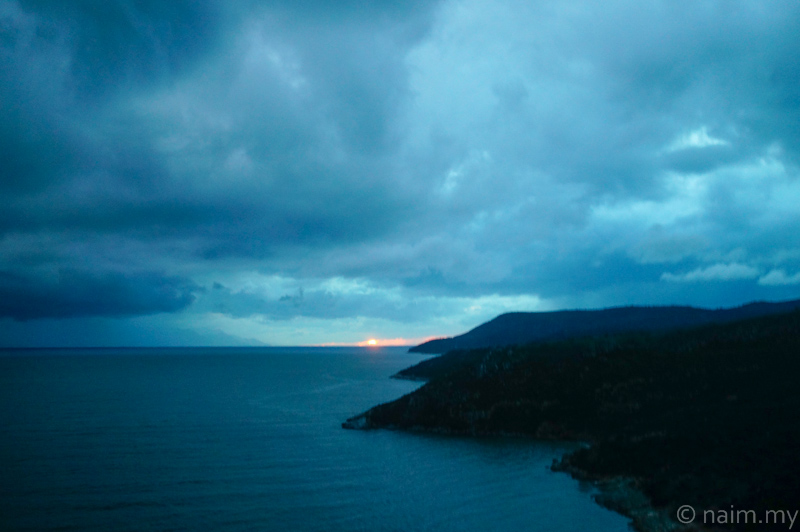 2 thoughts on “Virgin Mary and St John in Ephesus”