Second day in Cappadocia and we have a packed programme today — full day tour, then off to Urgup bus station to catch the 6.30pm coach to Ankara, the capital of Turkey.  We should be in our Ankara hotel by midnight, but first thing’s first, climb up the staircase for breakfast. 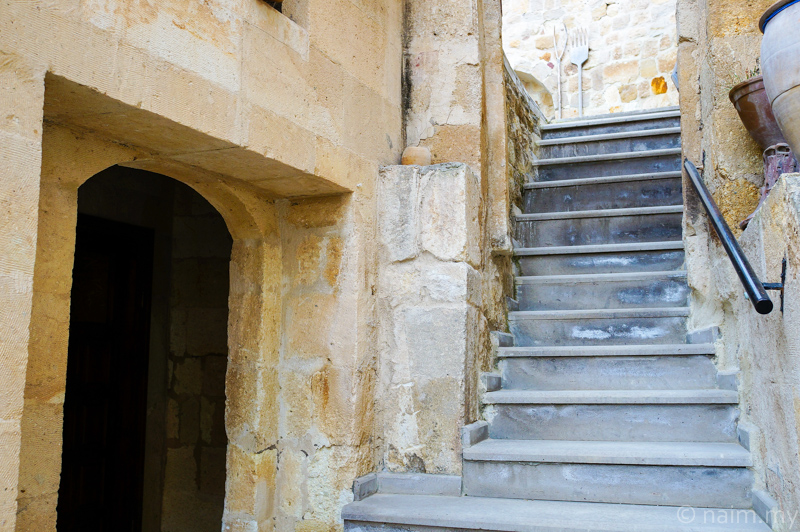 Just outside the dining room, there’s an entrance to another floor of cave-rooms.  The facade is done very well, you wouldn’t know there are caves behind it. 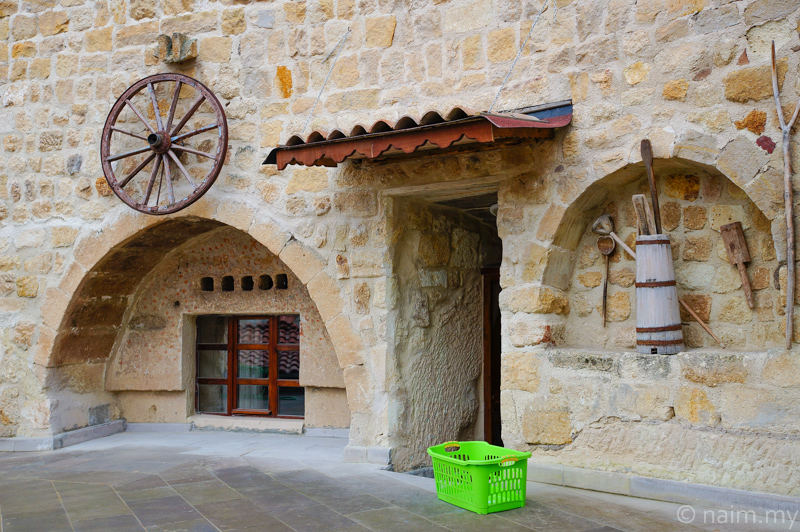 The dining room has a very nice vista of this Urgup valley, with countless cave homes and hotels on the other side. 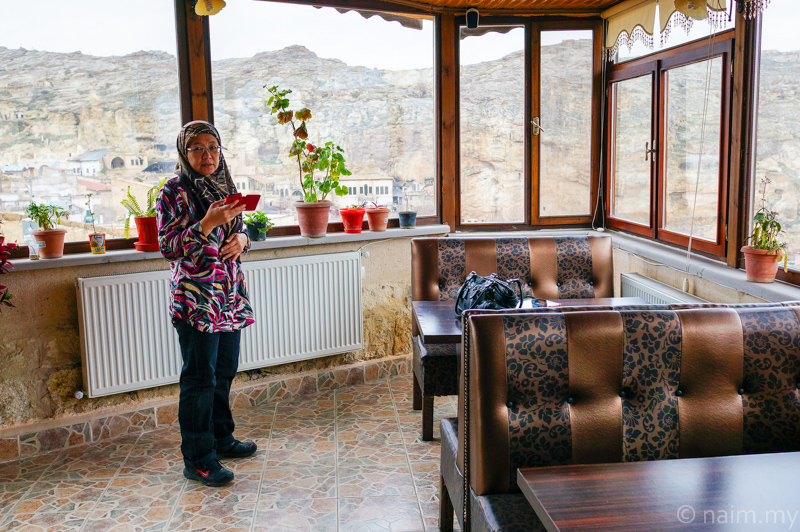 The weather does not look kind today — freezing cold but no snow. We are okay as long as it does not rain. Breakfast, and I love olives, cheese, and cherry juice. 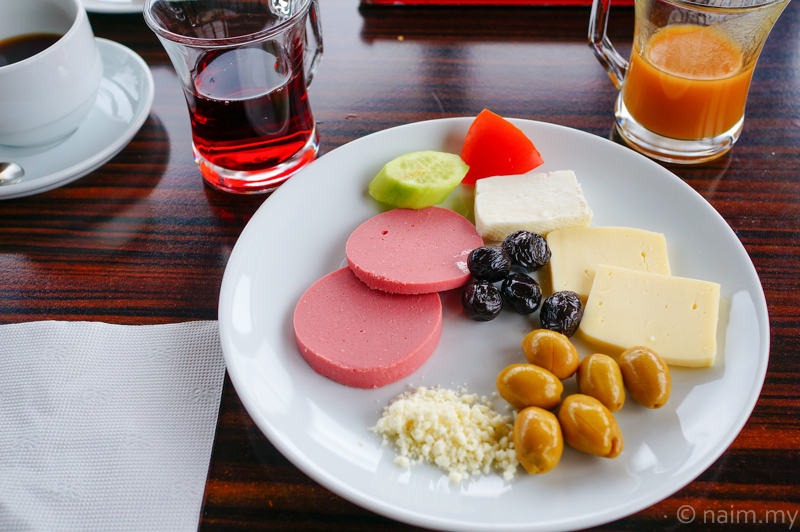 With the man himself, Ibrahim. A very nice guy indeed, he hails from Erzurum, another ancient city located in eastern Turkey, about 700km away by road. 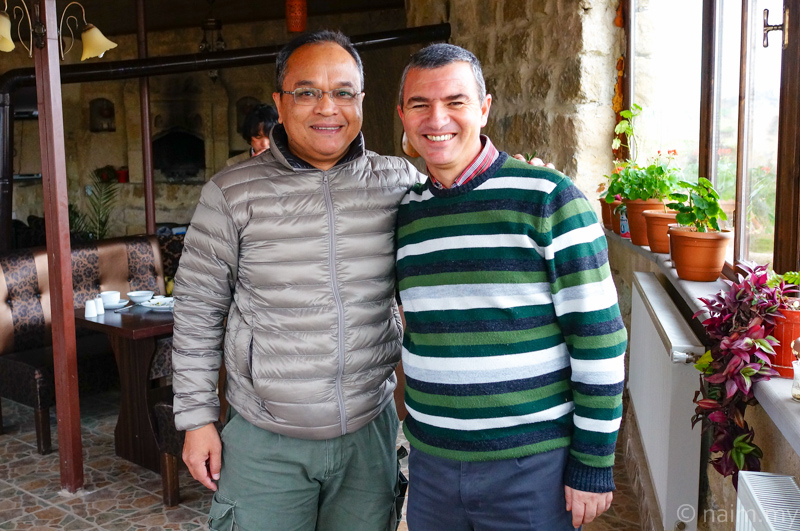 Ibrahim is expanding his hotel, by building more cave-rooms into the tufa hill. So I do a tour of this interesting ancient technology. 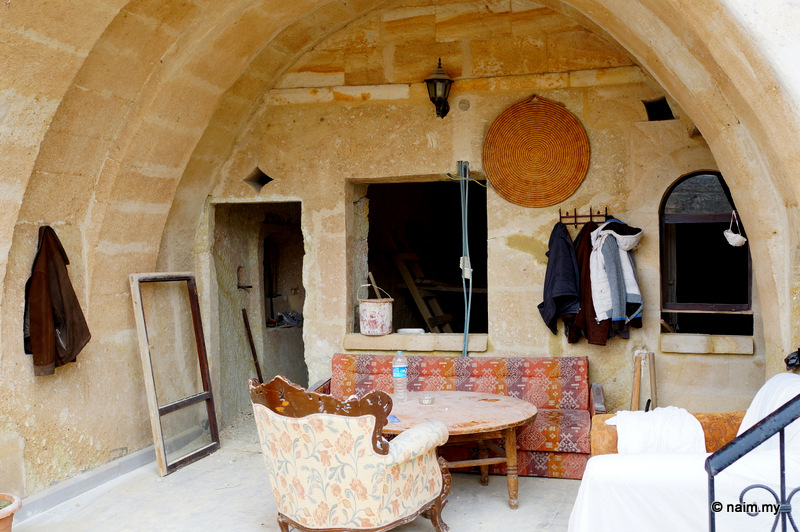 Skilled builders at work, all sculpted by hand. Note the chandelier nook. 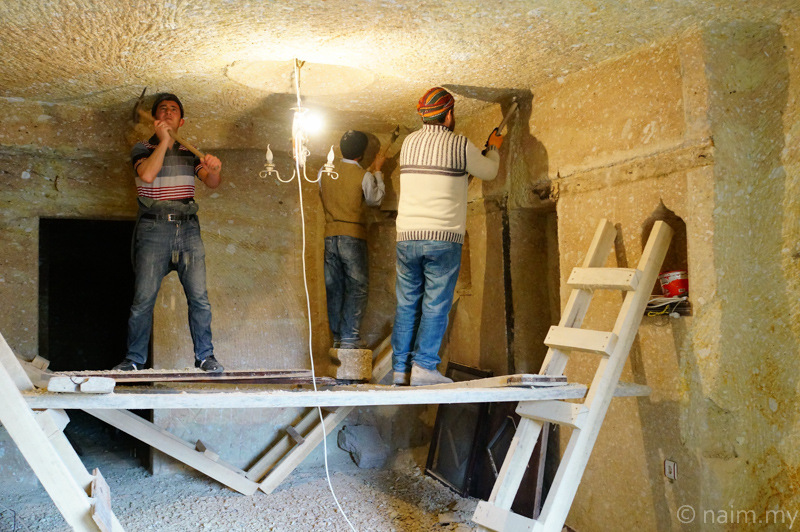 This guy is the master builder — he oversees everything. Cave-building is a skill handed down for generations for thousands of years in Cappadocia. 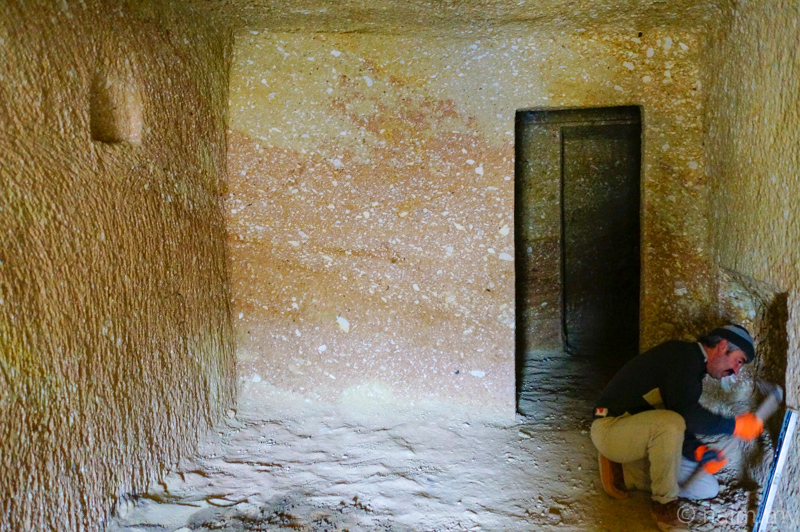 Debris is quickly removed. Ibrahim tells that it’s tough to get permission to add more rooms, with so many conditions to satisfy. I guess the authorities are being mindful of the UNESCO World Heritage Status conditions. 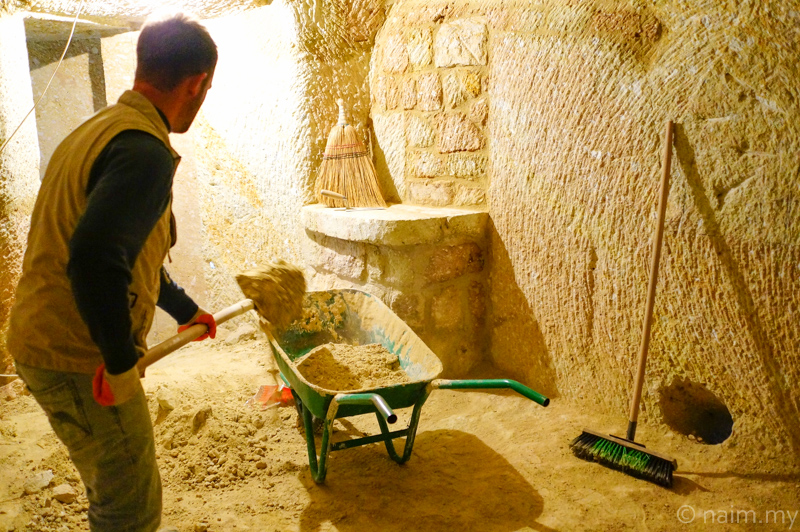 Ibrahim is quite proud of his Tripadvisor credential. Anybody going to Cappadocia, do google ‘Dedeli Konak Cave Hotel’ — it’s a nice place to stay, excellent location, great breakfast, and genial Ibrahim is your host. 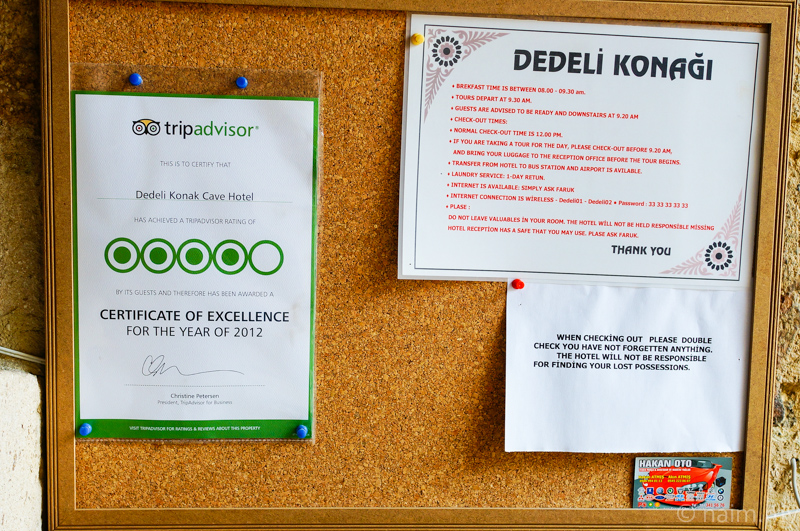 After breakfast and saying good-bye to Ibrahim, we check out after just a night’s stay, which is a big pity. Would love to have stayed longer. 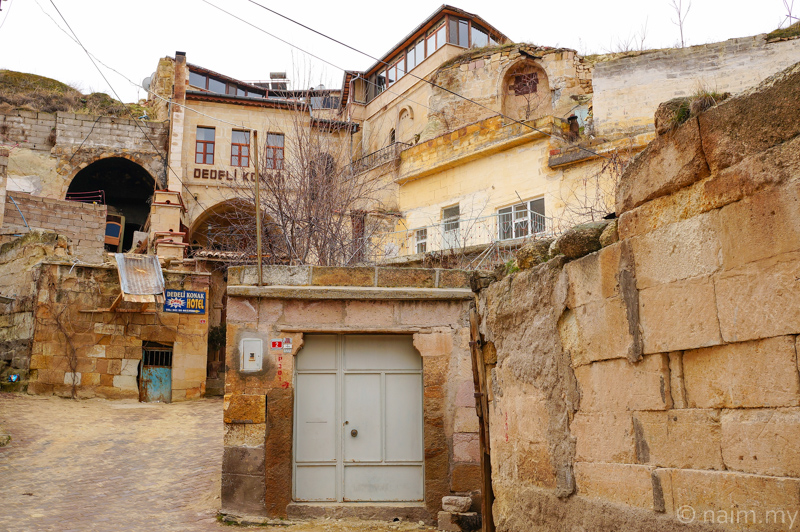 A short walk away, our van is waiting. Our cave hotel is inside that tufa hill to the right. I feel like a hobbit staying there, but very good experience indeed. 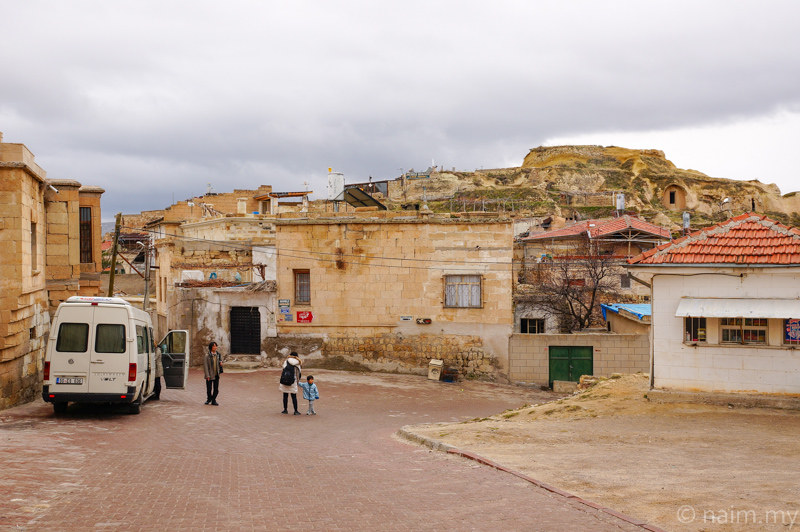 We drive off, but stop for a look-out soon after. Two layers of rocks, the top one harder, so it stays up there while the bottom layer is eroded. 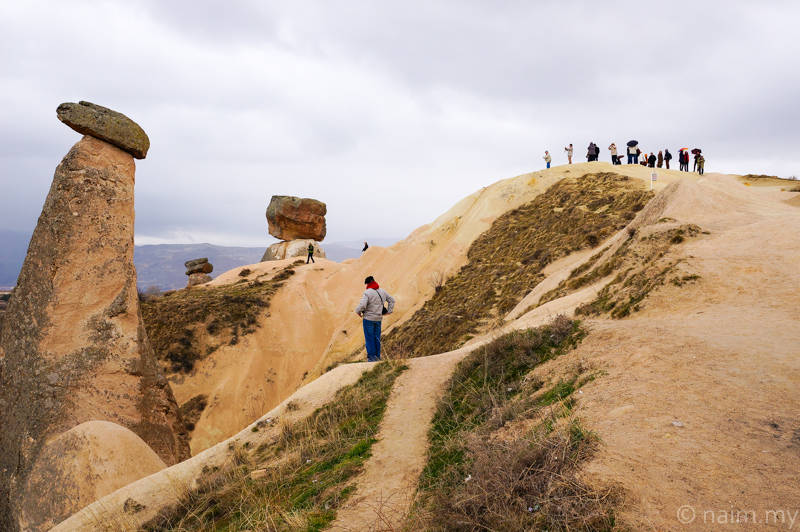 Back to the Valley of the Pigeons, but at the other end of it, compared to yesterday’s sunset location. Imagine this whole place being covered with volcanic ashes of various components millions of years ago. Then gradual erosion removed the softer ones, leaving the hardened tufa outcrops behind. The process is still ongoing — these hills would eventually be eroded too, but new ones would be exposed, and so on … 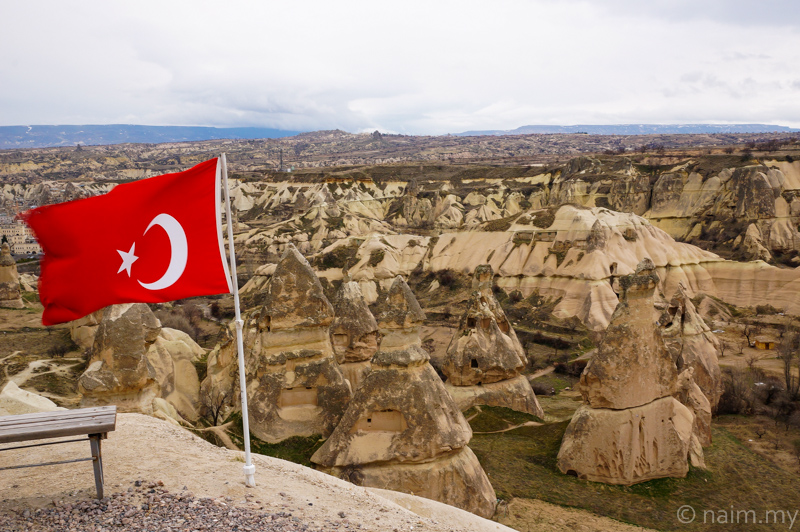 Down in the valley, some colourful farmhouses. More ancient cave dwellings along the valley. You never get tired spotting them. They look like huge termite-hills. 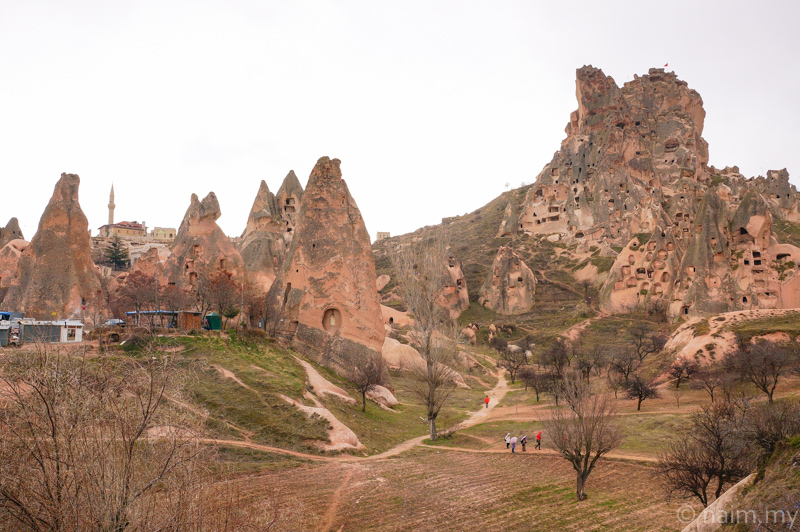 But this is the jewel in Cappadocia’s crown. 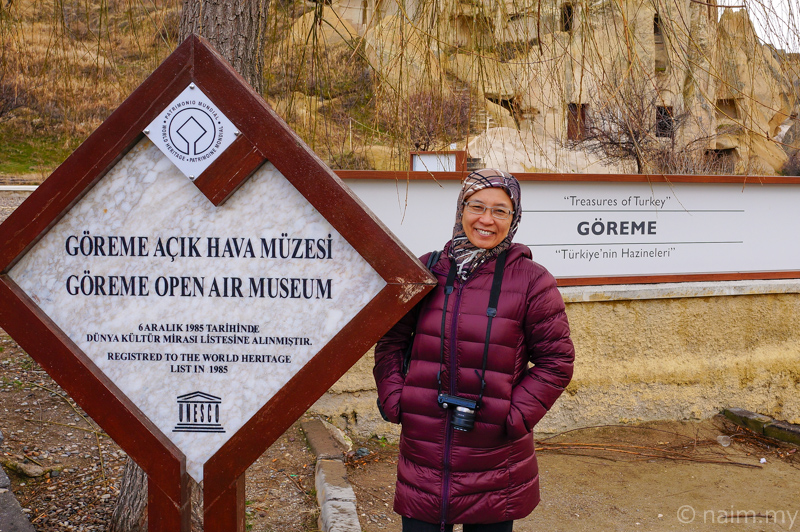 It seems that, about 1,500 years ago, this place was built as a complex of monasteries and churches and chapels, all in the service of God. These places of worship, cut into the tufa rocks, are richly decorated with frescoes, some with its original colours still intact. 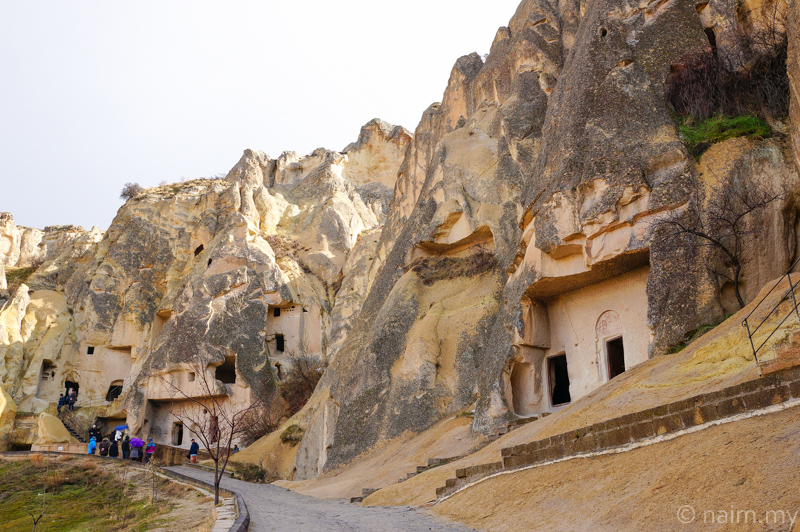 By the end of the 2nd c. AD, a large community of early Christians had formed in Cappadocia, with a bishop in Caesarea (now Kayseri). There are over 10 cave-churces here, the bulk from the 10th, 11th, 12th c. AD, all Eastern Orthodox. 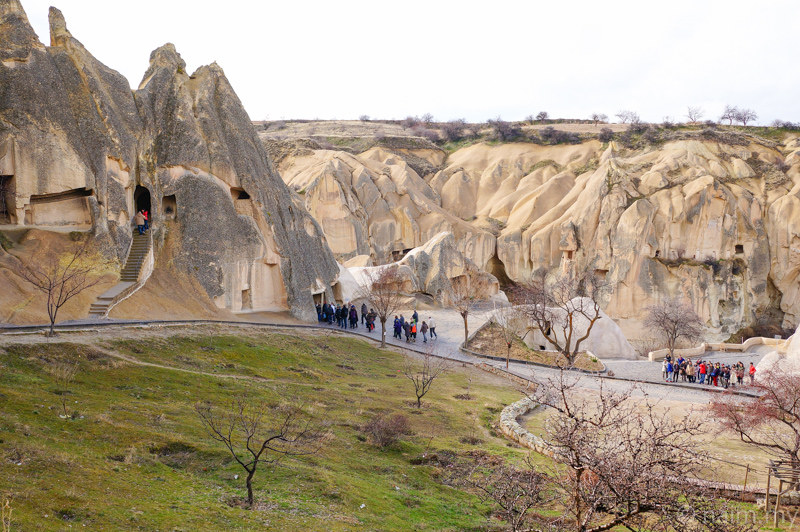 Construction, or cave-making more like it, was thought to have started in the 4th c. AD under the instruction of St Basil of Caesarea (now Kayseri). 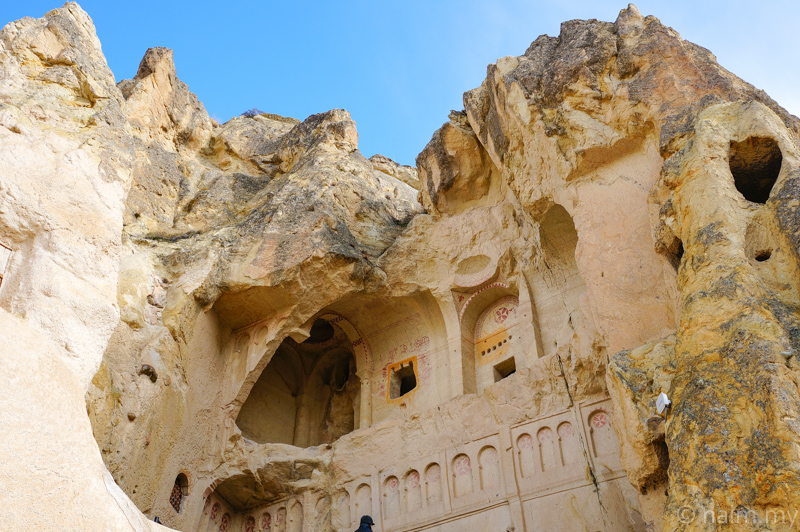 The complex is on high ground, and one can see right down into the plains below, littered with more tufa outcrops. The caves are also homes to monks and nuns. 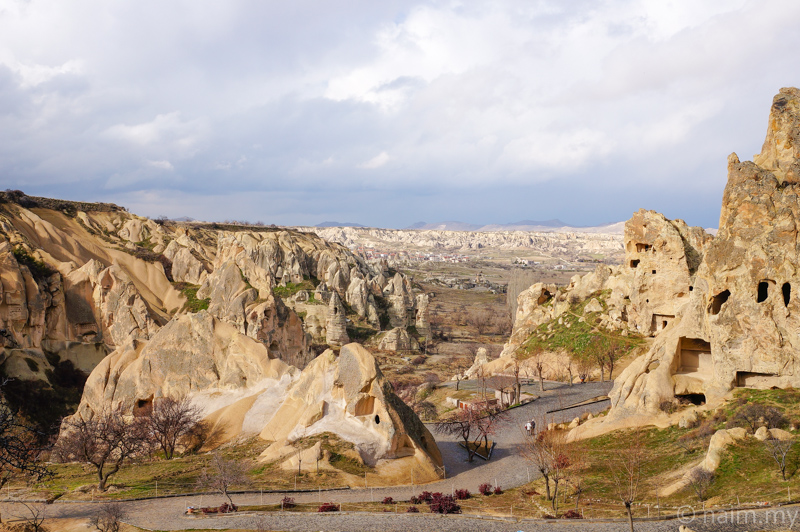 Let’s see some fabulous frescoes (paintings on the walls and ceilings), starting with the Dark Church (11th c.) — ‘dark’ because it lacks natural lighting. The busy frescoes here have a lot of stories to tell, from the New Testament. Fine example of 11th c. Byzantine art. 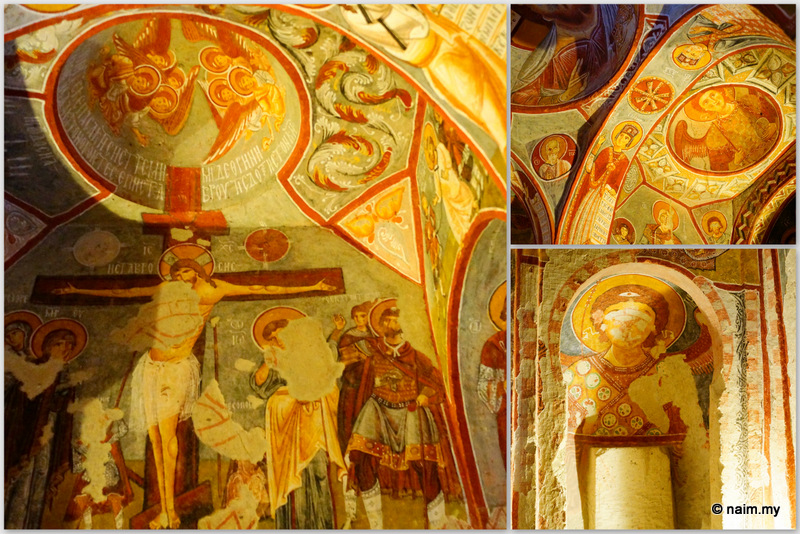 Frescoes at the Snake Church (11th c.), named as such because there’s a ‘snake’ (which is a dragon actually, see top left) being slain by St Theodore and St George. Also images of Emperor Constantine and his mother St Helena. Bottom left shows a old man with white hair and beard, but with a female body! This is St Onuphrius, who according legend, was originally a beautiful maiden. She was so very upset with an unfair marriage arranged by her parents that she prayed to God to become a man, which was fulfilled, and become a holy (wo)man. I love legends. 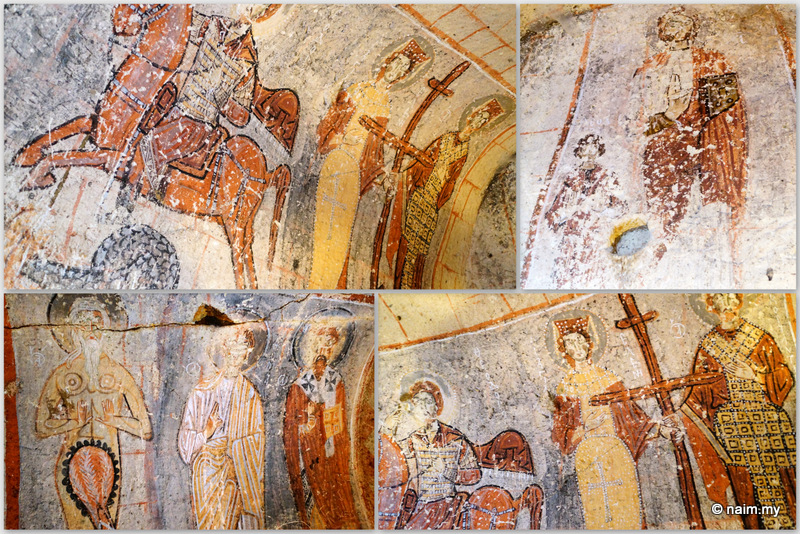 Frescoes at St Barbara Chapel show simple geometric patterns, no images of humans. This could be drawn after the 8th c. iconoclastic controversy, when the Eastern Orthodox Church forbade the depiction of humans, especially the faces. 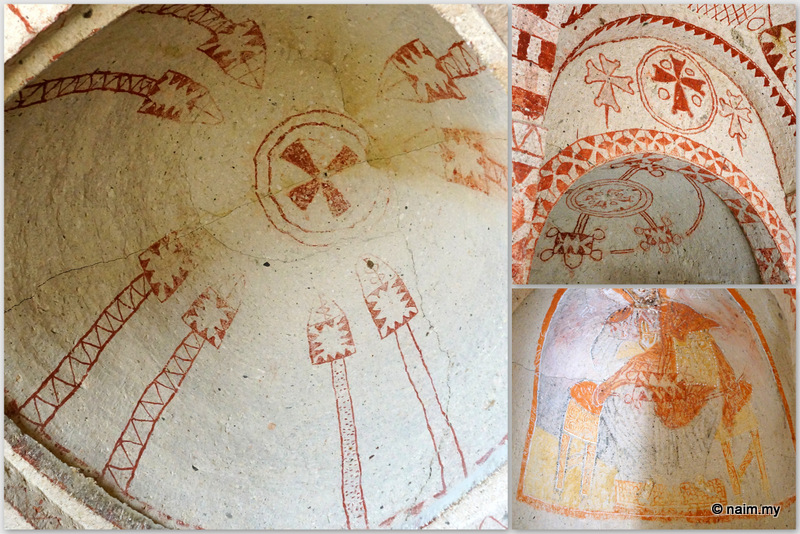 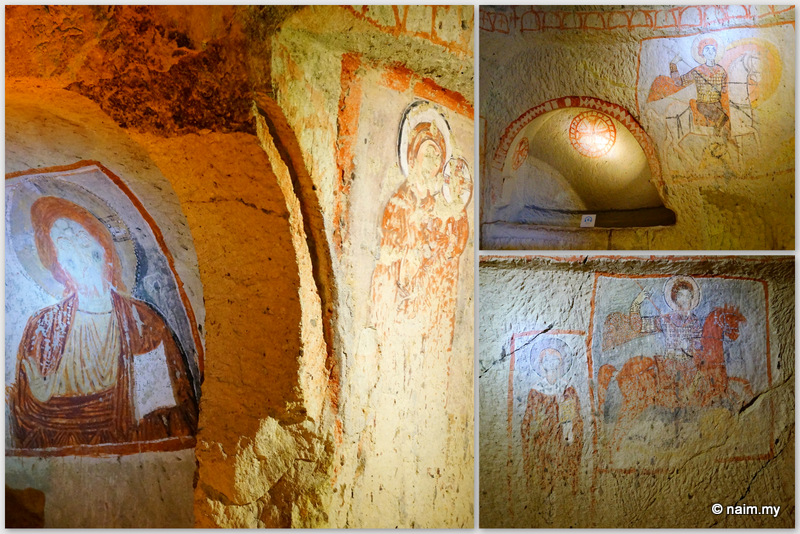 Also in St Basil Church, these rock trenches were actually for dead bodies. It seems that in early Eastern Orthodox, the corpse was placed here first before burial. 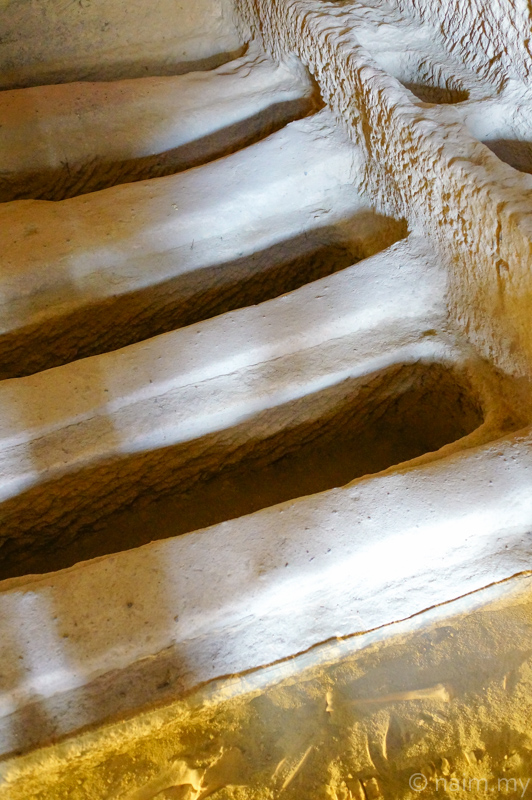 Christian symbols carved into the rocks outside the chapels. I can only discern the ancient Greek Cross (left) and the Maltese Cross (top right), while the 3rd one looks like a pre-Christian cross (from pagan times?). 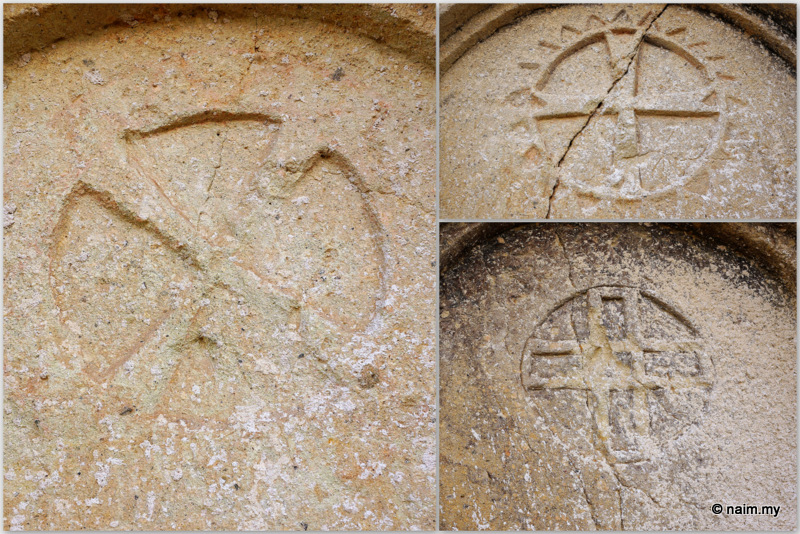 When you come here, chapel-hopping is the way.  It’s interesting that 1,500 years ago somebody even thought of a well-planned, open-air religious (cave) complex … as if they knew that this would become a major educational attraction of the future. Indeed that’s what it is now, thanks! 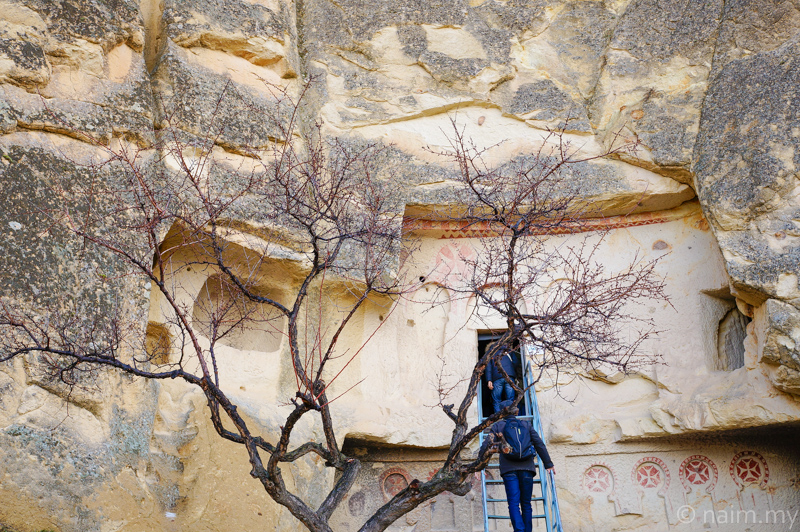