Dizzy with so much ancient Anatolian history in our heads, we make our way downhill, as we find our way back to the hotel in Ulus, the old quarter of central Ankara. 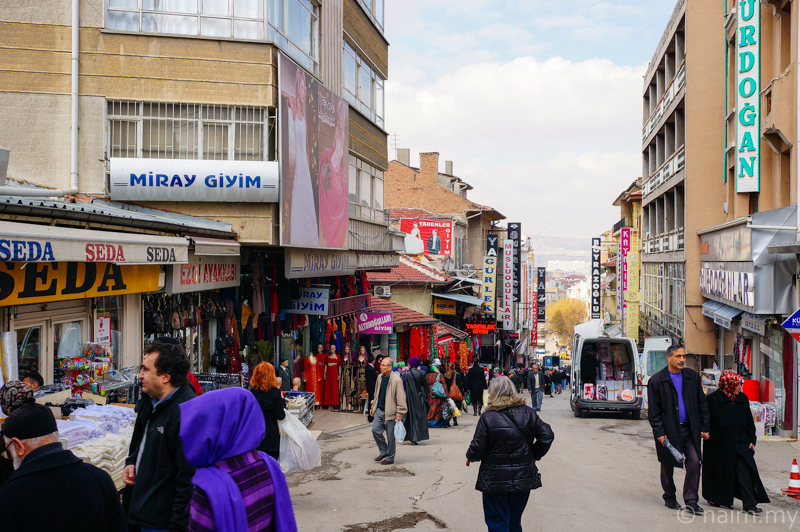 Passing by an old bazaar, we are clueless what these colourful things are. Yes, it’s Chinese New Year time now, but we are pretty sure these have nothing to do with it. 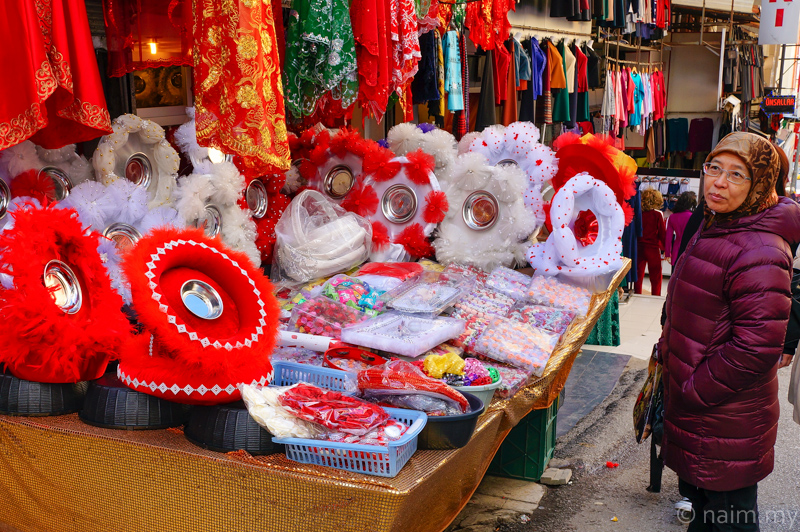 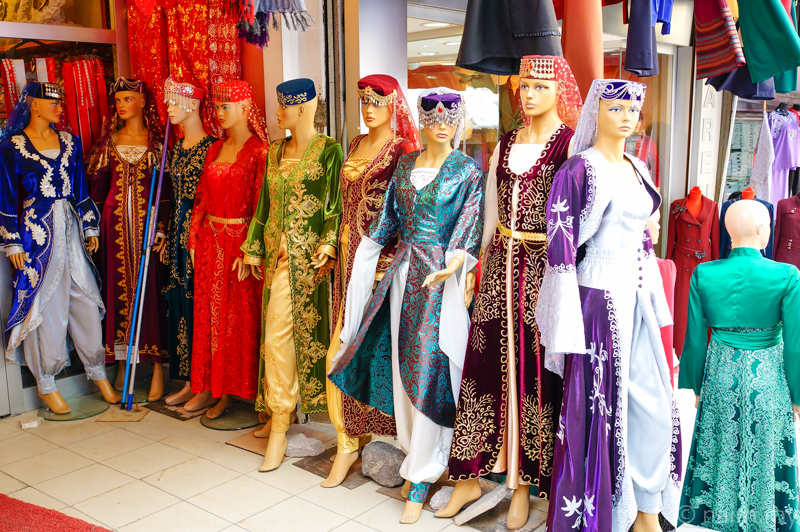 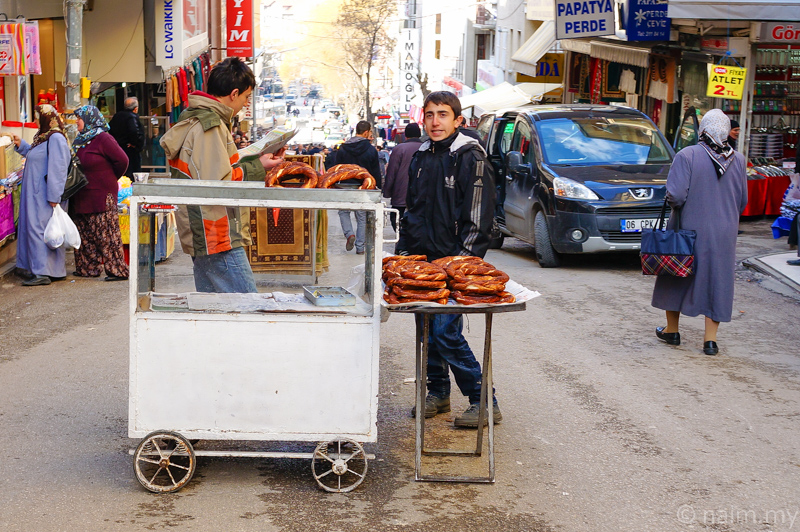 No simit for us, but a proper lunch at a Gaziantep restaurant down the hill. Gaziantep is a city in southern Turkey, close to the Syrian border, so I suppose  these dishes are traditional Gaziantep fare. The chicken and beef are very tender and taste fine, the spices a bit weak, but overall pretty good. 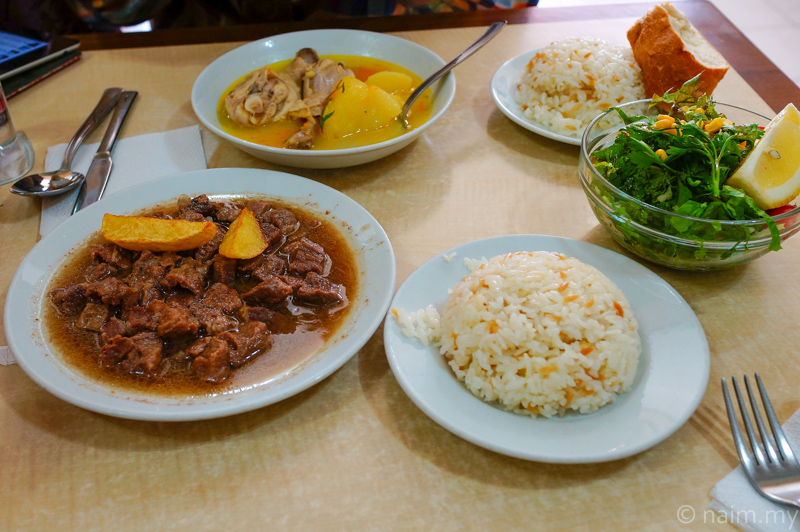 We have time before leaving for the airport, so we stroll westwards from our hotel. 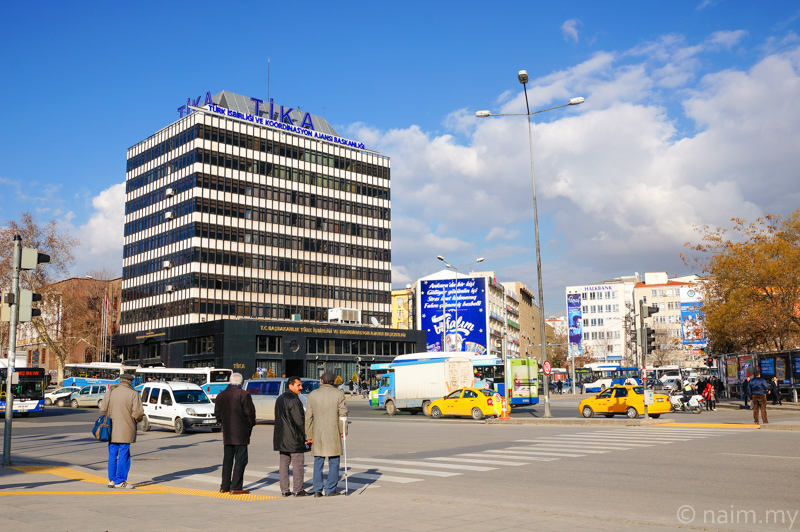 We come to Genclik Parki — the Youth Park. At 850m above sea level, this used to be a marsh. The park was opened in 1943, and is now right in the middle of Ankara. It’s freezing cold on a working day, so there’s now only the usual lunch-time office people loitering. 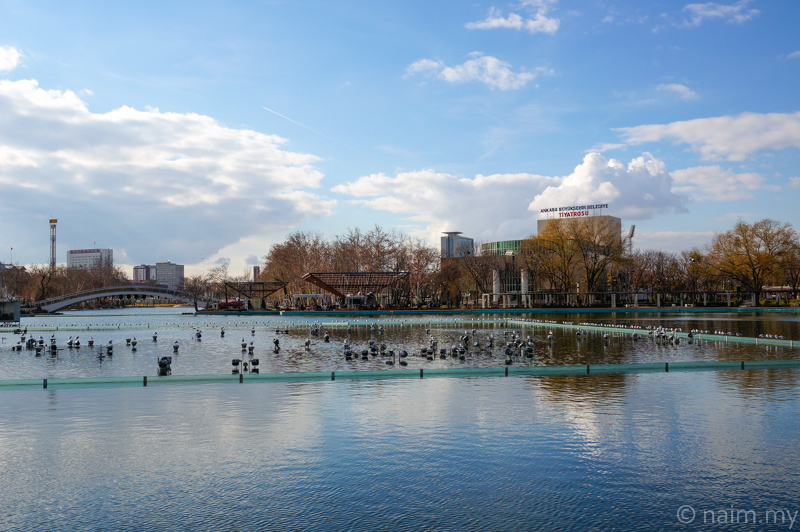 Quite a modern bustling city Ankara is, 2nd largest city in Turkey after Istanbul, it replaced Constantinople (old Istanbul) as capital of Turkey in 1923. Ataturk had used Ankara as his base in the War of Independence (1919-1923), against the World War I occupiers. 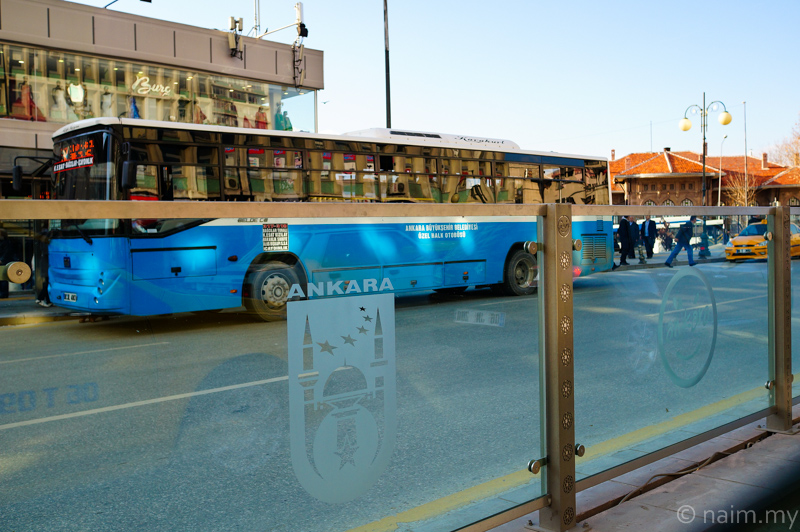 If not because of Ataturk, they’d be no modern Turkey now, as the Allies who beat the Ottomans in WW1 had planned to divide the conquered land among Greece, France, Italy, Armenia and UK. That’s why Ataturk is so much revered — they even built  a mausoleum for him here in Ankara. 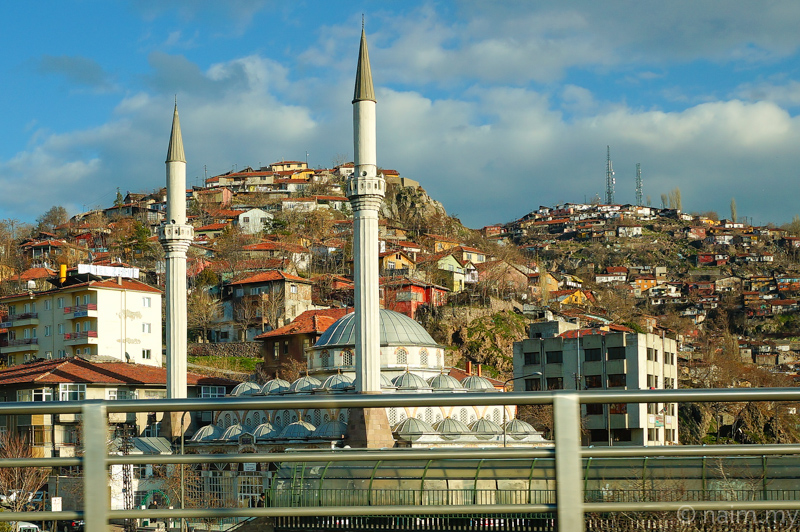 We head northeast towards the airport, located 30km from Ankara, as the landscape becomes desert-like. Mosques in Turkey show their pecking order with the number of minarets. The maximum is 6, as owned by the majestic Sultanahmet Mosque, aka the Blue Mosque, in Istanbul. 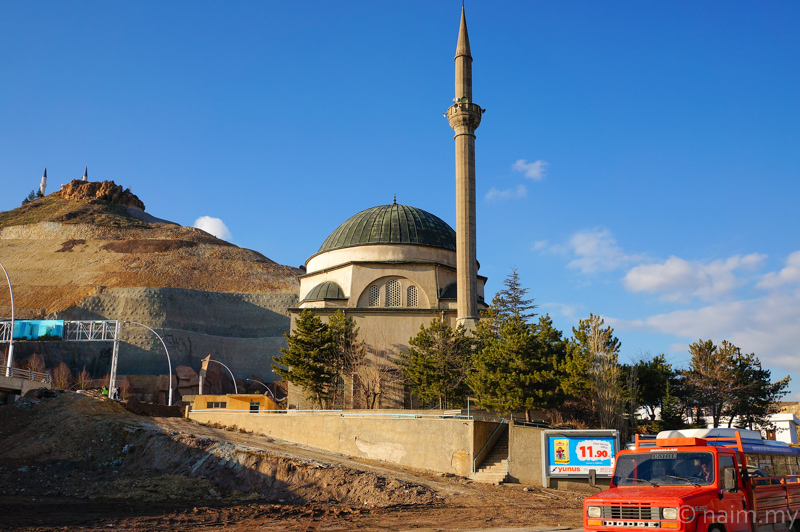 Another modern township along the expressway to the airport. Now metro Ankara has close to 5mil people, and many modern housing estates radiate from central Ankara in all directions. 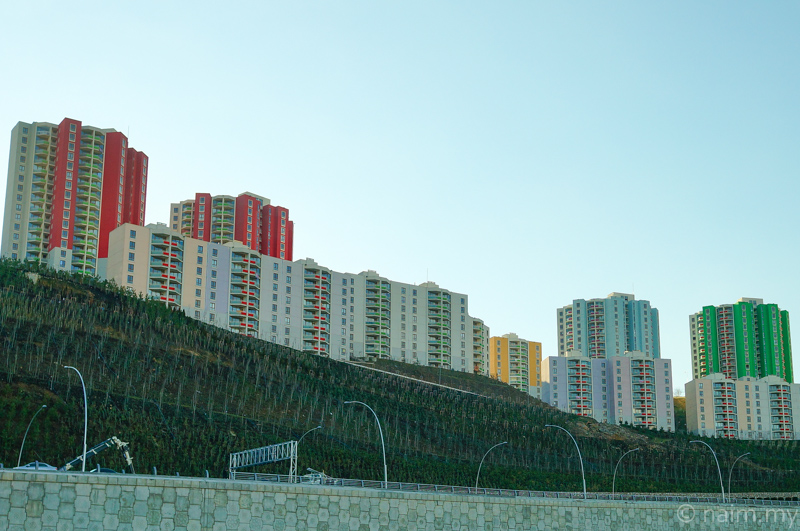 A piece of neo-classical Anatolian architecture I believe. 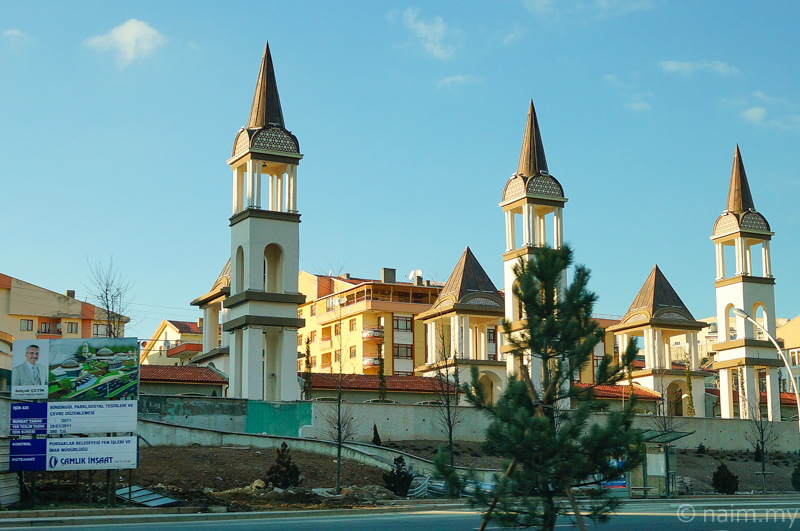 The airport finally — Ankara Esenboga International Airport ESB, in operations since 1955  — won an award for best airport in Europe in 2009. Interesting, since Ankara is actually in Asia. 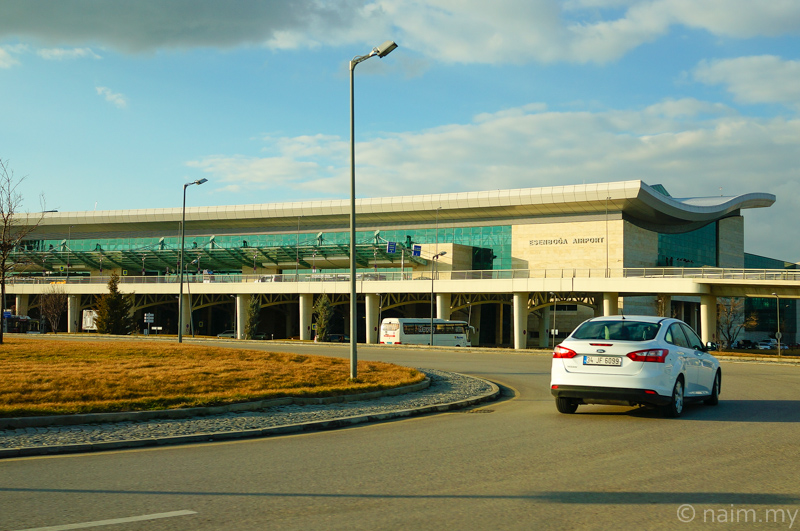 Impressive new terminal. Esenboga is the name of a village founded in early 15th c., when the Turkic army troops settled here. 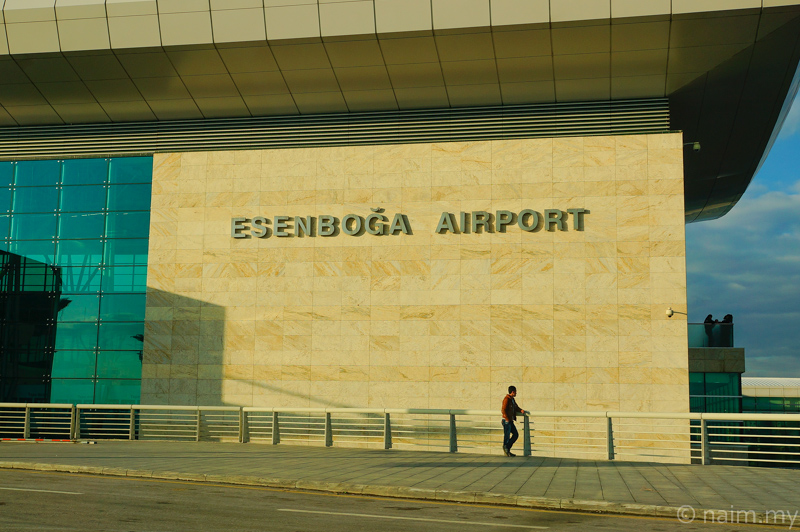 This new terminal was opened in 2006, to handle 10mil passengers per year. 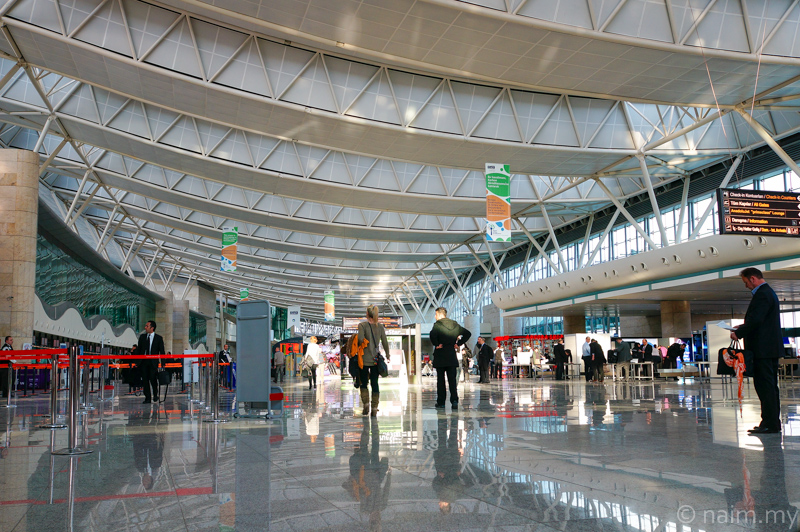 Here we go, our flight to the city of Sanliurfa (better known as just Urfa). 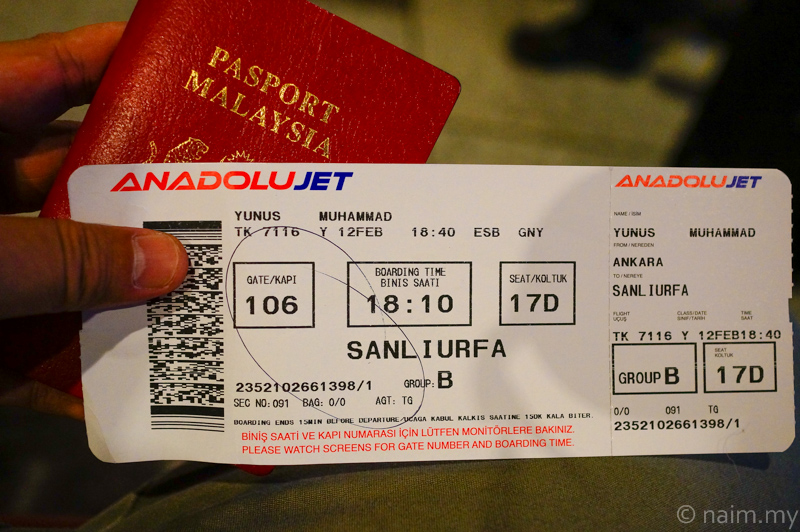 Urfa is located in southeastern Anatolia, close to the Syrian border, about 600km as the crow flies from Ankara. 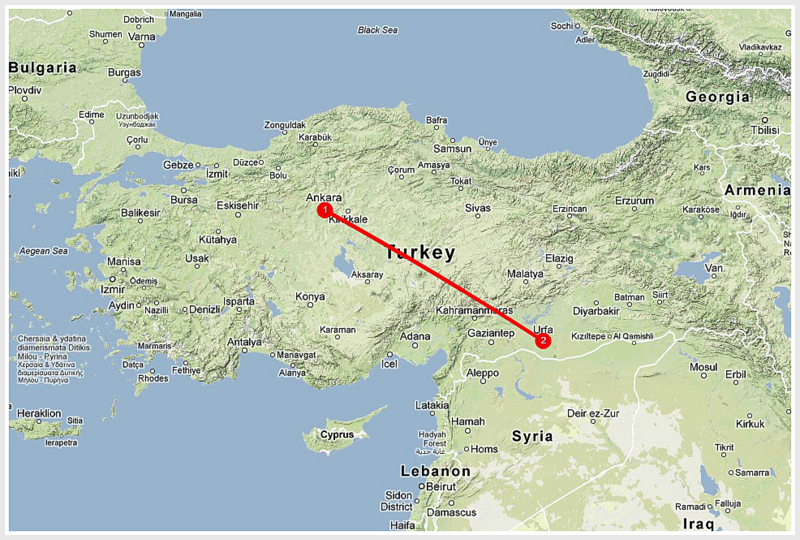 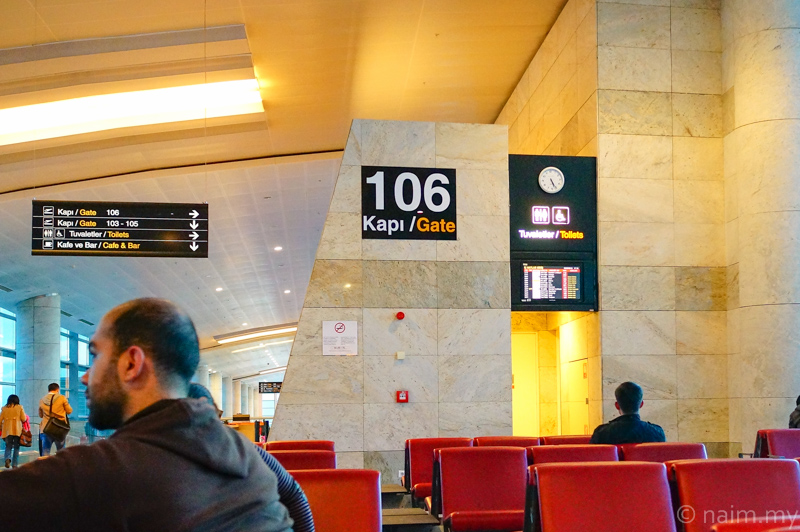 Winter time, the sun sets early and our 6.40pm departure would probably be in darkness. 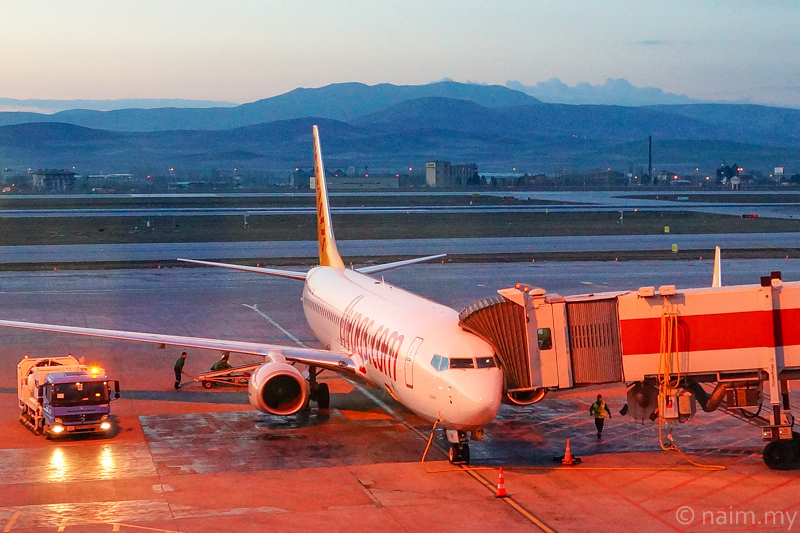 We land at Urfa Airport GNY at 8pm, and take a (pricey) cab to the old quarter of Urfa where our hotel is. View from our room balcony looks interesting, as I try to get my bearing. 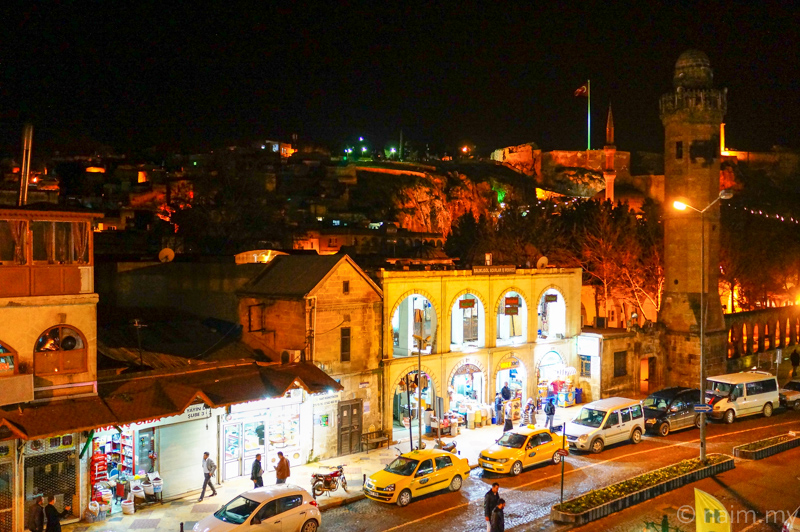 As usual dinner is foremost, so we scour the narrow street where our hotel is — a sweet shop we spot gives a good first impression of Urfa! 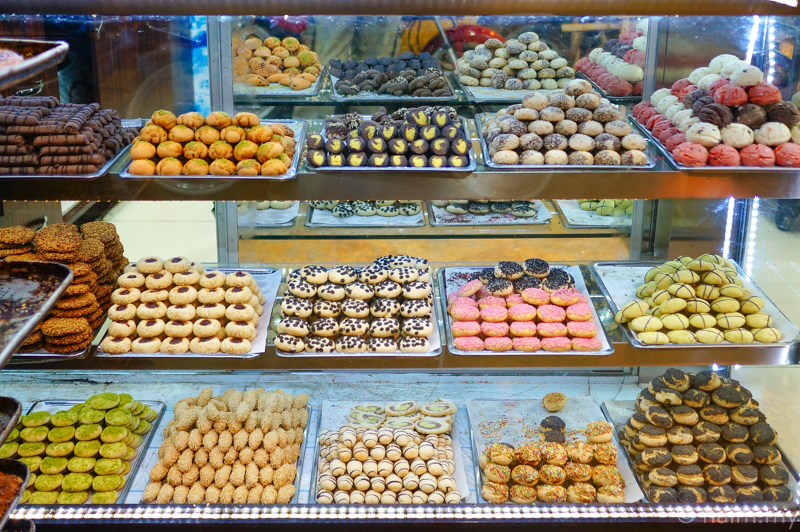 But these are what we are after — I hear the kebab in Urfa is arguably the best in the whole of Anatolia, and by extension, the whole world! There you go — chicken, beef, lamb, liver, plus other innards. 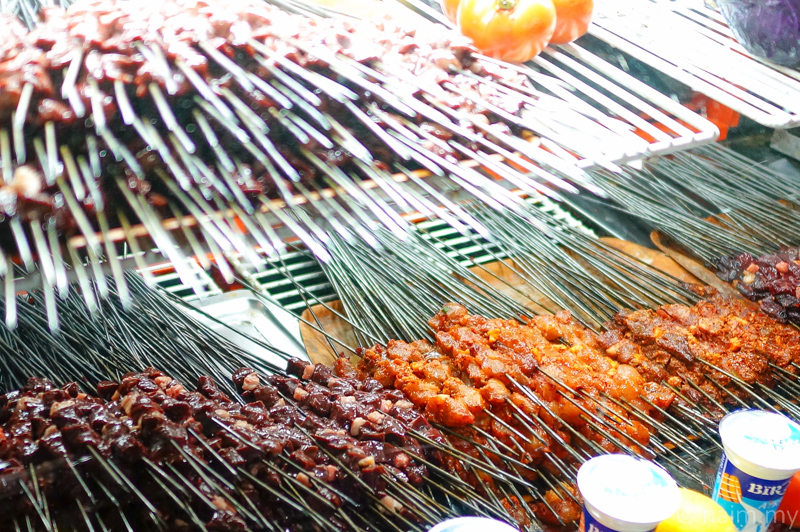 We try the alfresco style, but it is freezing cold, so we do not stay long out here. 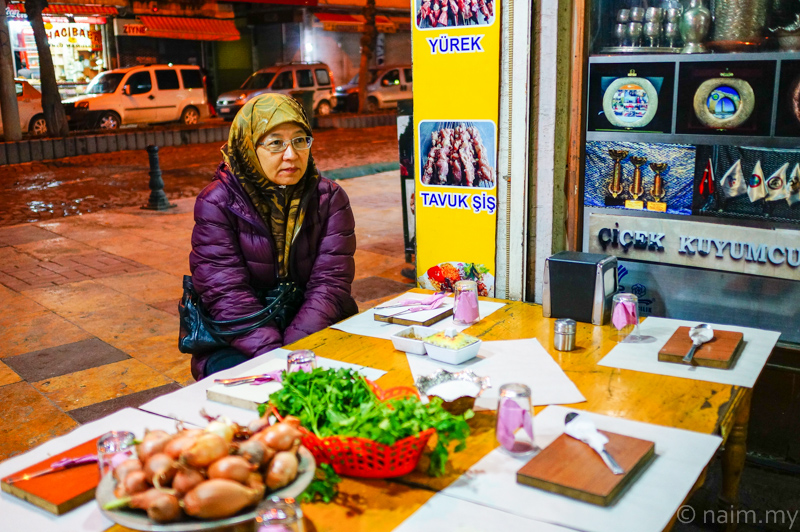 We soon move indoor where the wall-mounted heaters are at full blast. Let the kebab man work outside, the embers should keep him warm. Note the odd-shaped stool — at first we did not know how to use it, really! 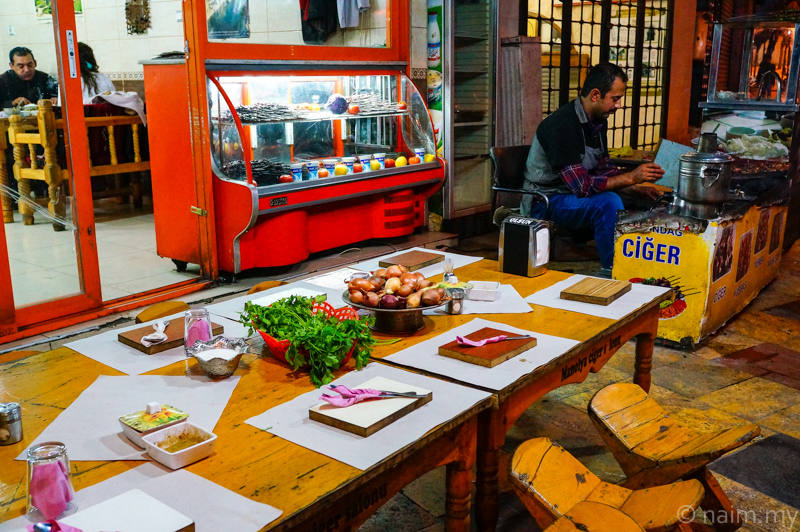 Chicken kebab for the ma’am … 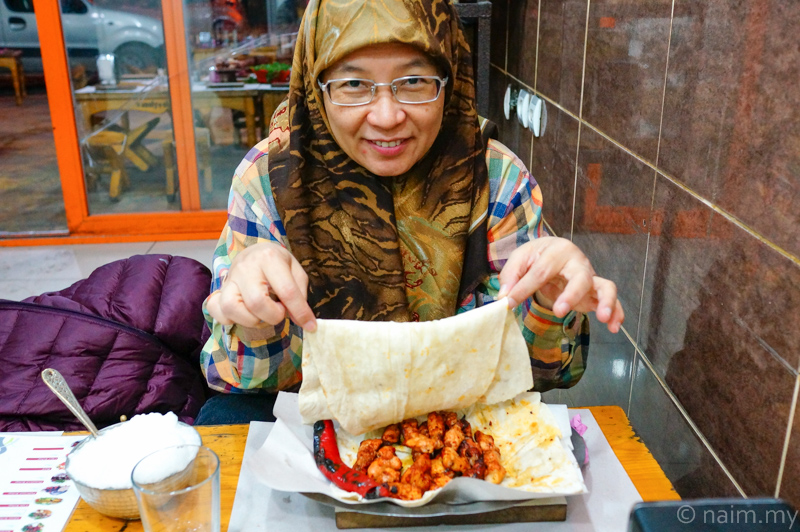 … and lamb for me. By the way, we are supposed to roll the kebabs ourselves. It is excellent cuisine, the spices are just right, and the meat soft and tender. Increase hotness by chomping on the chilli. 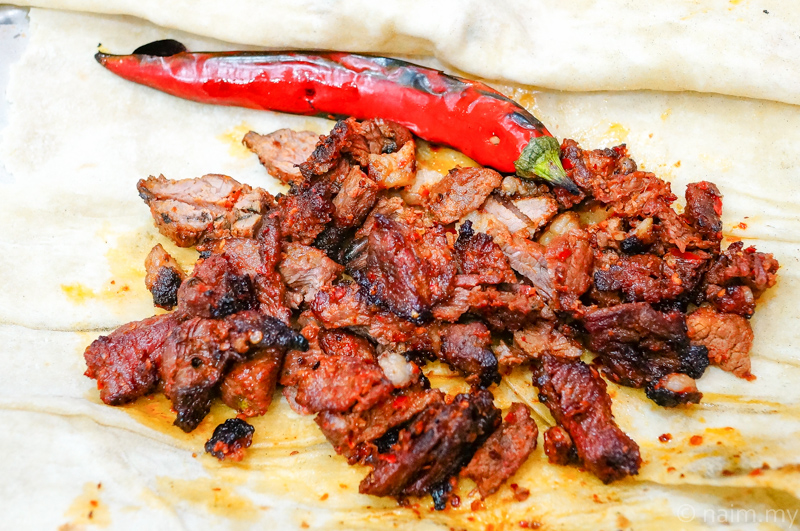 And of course, the ubiquitous ayran – a type of frothy yoghurt drink they always serve with your meals, and the one we have now is warm and salty. I sort of like it, but not the ma’am. Acquired taste, definitely. Dinner done, we happily retire to our warm room, for good night’s rest — tomorrow is going to be an exciting one. 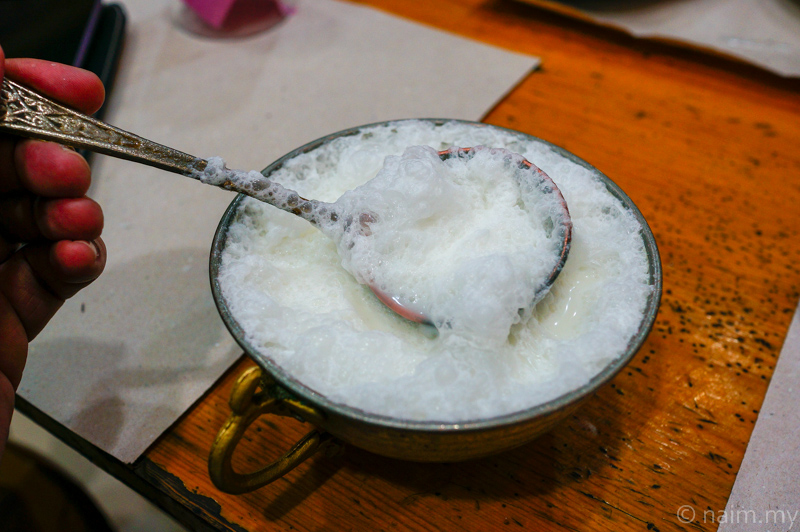 One thought on “Ankara to Sanliurfa (Urfa)”